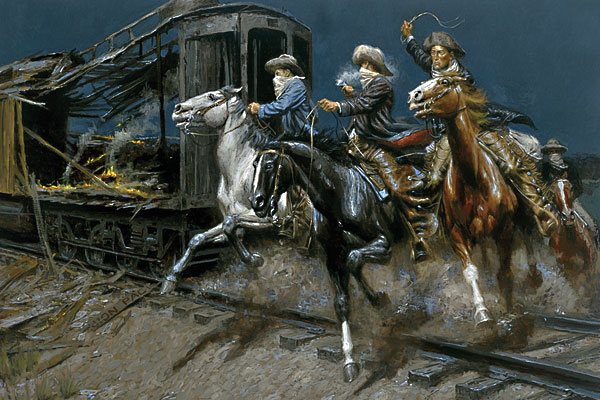 He went on to state, “…you will not find two accounts agreeing together in relating the same fact: some have remained contested points to this day, and will ever remain so.”

When artists Andy Thomas and Greg Kelsey partnered up to portray the Wild Bunch robbery of the Union Pacific train that took place in Wilcox, Wyoming, on June 2, 1899, they confronted a controversy over the number of train robbers and even their identities. The story they agreed to tell manifested gloriously into an oil and a bronze that sold at the C.M. Russell Museum’s auction fundraiser, held in Great Falls, Montana.

Historian Donna Ernst included Will Carver as one of the six robbers. Her history is the account the artists settled on. Kelsey portrayed three robbers in his sculpture, while Thomas portrayed the other three (from left): the Tall Texan, the Sundance Kid and Carver. “We opted to put chaps on them because of their backgrounds and the terrain they rode through to pull off the robbery,” Thomas says.

In the oil, you can see the express car blown to smithereens by the outlaws’ dynamite, scattering the loot that amounted to perhaps $50,000 in valuables.

But Kid Curry biographer Mark Smokov argues only Kid Curry, Flatnose Currie and Sundance Kid pulled off that robbery. “I have debated this with other Wild Bunch enthusiasts, writers as well as non-writers,” he says, “and I still can’t see evidence for more than three.”

His assessment comes from the posse claiming the evidence showed only three robbers leaving the scene, as well as the court testimony presented in Lee’s trial, in which most of the train crew and mail clerks stated they saw anywhere from two to three robbers.

“As for Carver or Kilpatrick,” he says, “they were still down in Alma, New Mexico. Carver was planning the Folsom robbery with Sam Ketchum and Elzy Lay. Butch Cassidy was at the WS Ranch. There is no evidence that any of them left the area and went to Wilcox.”

Let the debate continue. Collectors at the benefit auction on March 21 roped in more than $5.6 million.