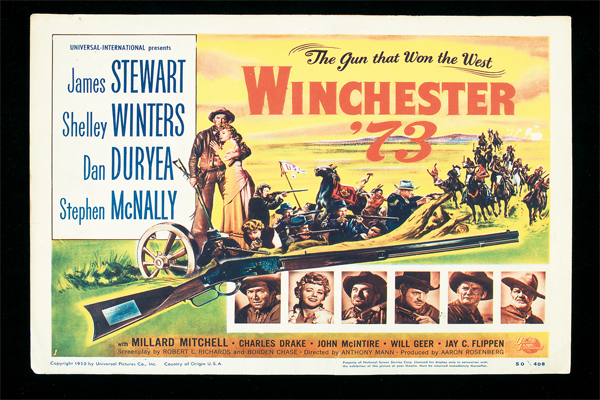 In the world of movie making, duplication of important props, such as the firearms of principle characters, is a common practice.

This is done so that one or more look-alike backup guns are on hand if they’re needed during production. In the case of the classic 1950, Universal International picture, Winchester ’73, the movie makers used three original 1873 Winchesters, since this was the age before replicas were available. With the gun bearing the title role and appearing in numerous scenes throughout the film, it was important to have backups of this featured firearm.

Late last year, I came across one of the trio of rifles used in Winchester ’73 while attending the Las Vegas Antique and Sporting Arms show. Rock Island Auction Company was previewing a selection of fine arms slated for its December auction, including this lever gun. Having seen the James Stewart film several times, I was fascinated to find one of the actual rifles used in the production and was equally pleased to see that the gun was in fine condition—unusual for a firearm that was part of a movie production.

As one of the original ’73 models that were factory refinished and engraved for the movie, this particular ’73 (serial number 703161B) bears a standard 24-inch octagonal rifle barrel. The Winchester warehouse received the lever action on March 2, 1916, according to the Cody Firearms Museum’s records. It is a Third Model, chambered for the .38-40 Winchester Central Fire (.38 WCF) cartridge, which, at the time, utilized a “5-in-1” motion picture blank.

Since these guns served as backups in the film, they were identically fitted with fancy checkered walnut stocks and fore-arms. Further, the side plates of the receiver are engraved and gold washed with a 19th-century Germanic vine engraving on a punch dot background. The legend “One of One Thousand” is engraved in all caps on the top of the barrel, behind the rear sight. Inlaid into the right side of the buttstock is a rectangular brass plate bearing the all caps legend “First Prize / Centennial Rifle Shoot / Won By—Dodge City, Kansas / July 4th 1876,” which relates to the movie storyline. This historic rifle sold for a $37,500 bid at Rock Island Auction’s December 2005 sale.

As of this writing, the author does not know the whereabouts of the other two rifles from this film. But the Cody Firearms Museum, in the Buffalo Bill Historical Center in Cody, Wyoming, exhibits the Winchester Model ’71 lever-action rifle, which famed exhibition shooter Herb Parsons used to perform the trick shots for the film.