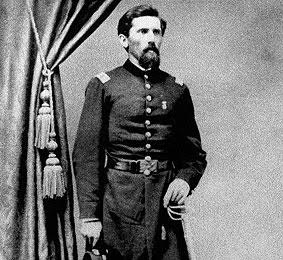 Most people around “The West’s Most Western Town” of Scottsdale, Arizona think of their founder, Winfield Scott as a God-fearing preacher and former Army chaplain. He was all that but he was also a fearless leader of men, fighting in some of the bloodiest battles in the Civil War.

Scott believed fervently in the preservation of the Union and when President Lincoln put out the call in July, 1862 to 300,000 volunteers, Scott, a newly ordained preacher, got permission to hold meetings and raise troops. His church gave him an indefinite leave of absence. For a time the preacher would lay down the pen and take up the sword.

The young minister went to his boyhood home of Farmer Village and quickly recruited a company of ninety-eight men from the surrounding area. Thirty of his cousins joined as did many from his former Sunday school class. He also recruited the entire town band, and the local glee club. The band went on to become one of the most distinguished bands in the Union Army and was present at Appomattox when General Robert E. Lee surrendered.

Scott and his men were organized as Company C, 126th Regiment, New York Volunteer Infantry and Reverend Scott became Captain Scott. The green troops, unarmed and untrained were sent to Harper’s Ferry, Virginia where less than a month after mustering in, they went into battle against Stonewall Jackson and his veteran soldiers.

Scott was wounded in the fighting but refused to leave the battlefield, until loss of blood caused him to lose consciousness. His uniform carried five other bullet holes.

The Yanks lost the battle of Harper’s Ferry on September 15th, 1862 and Scott was taken prisoner but soon paroled. He went home to heal, but still on crutches, begged to return to duty. The New York Volunteers were assigned to the Army of the Potomac with General Winfield Scott Hancock’s Second Corps. Despite his painful leg wound, Scott remained with his men and in July, 1863, fate led them to a place called Gettysburg.

At Cemetery Ridge, Scott and the men of the 126th went into battle again. They were cut to pieces at the infamous Wheat Field where Scott lost a third of his men. There were twelve bullet holes in his hat, coat and trousers, but Scott’s amazing luck was holding. He was wounded twice on the final day of the battle as the New York Volunteers suffered the third highest casualties of any regiment at Gettysburg. Scott remained in the field with his men and saw the decisive battle through to the end.

On May 12th, 1864 at a sleepy crossroads called Spotsylvania Court House, a fierce battle was engaged in what was called the most terrible twenty-four hours in the war. Scott was leading a charge when he was wounded in the chest, but the force of the bullet was spent on the Bible he carried in his uniform pocket. He was back in command of his troops the next day but five days later he was wounded again by an artillery shell while charging a Rebel breastworks that ripped off a portion of his upper leg.

He was left for dead but rose up with his rifle and demanded he be taken to a field hospital. One of his soldiers carried him from the field.

When Scott’s wife Helen learned of his condition, she was at first refused permission to go to him, however she managed to get a private meeting with President Lincoln and he wrote her a pass to join her husband. There, she arranged to take him home. For Winfield Scott the war was over. He’d survived three of the bloodiest battles of the Civil War: Gettysburg, the Wilderness and Spotsylvania.

Scott’s gallantry in action earned him the respect of both enlisted and officers alike. They gave the man who would later found the town of Scottsdale a nickname that suited: “The Fighting Parson.”