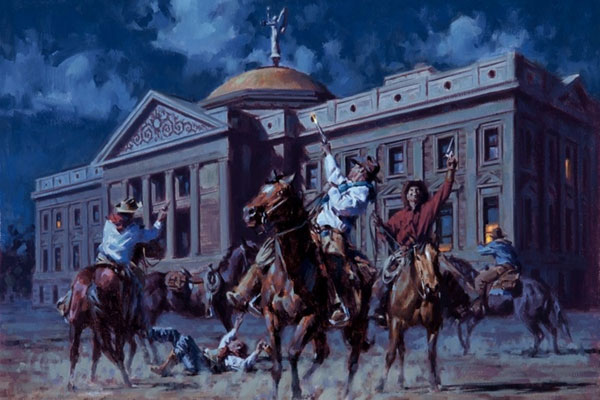 She’s been referred to as the Goddess of Victory, Statue of Justice, and Madame de Vaunte but Arizonans prefer to call her Winged Victory because of her resemblance to the Greek statue that bears the same name.

The Territory of Arizona purchased this 600 lb. seventeen-foot-tall beauty in 1898 for $150 and when the capitol building was completed in 1901 she was placed atop the copper dome as a weather vane.

During the early 1900s, cowboys, following a raucous night in the local saloons along Washington Street amused themselves “giving the lady a whirl” by firing their six-shooters at her wings.

The prevailing winds that blew during the months when the state legislature was in session often caused Winged Victory to turn her back on the front entrance. This gave rise to political jokes about the white lady showing her disdain for politicians in general. One thin-skinned politico took exception in 1957 and had her welded in place….respectfully facing the front.

This indignity was corrected in 1975 during another restoration effort when the lady in white was again set free to turn her back on Arizona’s politicos.