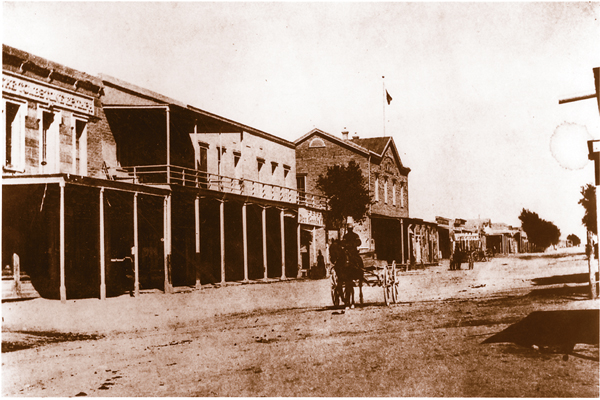 From handball to football, from polo to golf, and from the Tombstone Tigers to the Wyoming State Penitentiary All-Stars, true Westerners have always had a love of sports.

When we think of the American frontier period, we usually think of rodeo and horse racing, but as you’ll find out in this issue, the Old West was full of all kinds of sports. For example, how’s this for an odd  juxtaposition: football and Tombstone? Somehow we can’t quite picture Doc Holliday and Wyatt Earp blitzing on third down, but check out George Parsons’ diary entry for January 12, 1882:

“Grand foot ball racket this afternoon on Fremont Street near Fourth. All hands joined in, all kinds of conditions and we had much joy. Result about $10 worth of glass broken in Epitaph and Nugget and some sore toes.”

Of course, there is no proof that Wyatt Earp (above) participated in the game. A week later, on January 17, Earp, Doc Holliday and Johnny Ringo confronted each other a block south of the football game, so it’s not entirely out of the realm of possibility. It’s not known if the football game played in Tombstone was soccer-based or rugby-based.

For this issue’s Classic Gunfights (p.62), Wild Bunch expert Dan Buck recommended researcher and author Gary Wilson, who has spent the past 10 years researching the Tiger of the Wild Bunch: Kid Curry. Many myths and misconceptions surround this fight, and Wilson was a great help in sharing the facts of the gunfight between Curry and Pike Landusky. Wilson became intrigued by Kid Curry while working on his book, Outlaw Tales of Montana (2003). His other works include “Long George” Francis: Gentleman Outlaw of Montana (2005) and Honky-tonk Town: Havre, Montana’s Lawless Era (due in July).

On a serious note, we were saddened by the news in February that Elizabeth Small had passed on (p.53). She was the last living link to our proud past. I often called her and asked her about Joe’s philosophy (WWJD: What would Joe do?), and Elizabeth was always gracious and helpful. When my partners and I first took over the magazine, I was quite curious about what had happened to the once burgeoning circulation (in the early 1960s, True West had a 260,000 circ; when we bought the magazine in 1999, it had fallen to less than 20,000).

“The footnote crowd took over,” she told me, with her usual candor. When I asked her what that meant, she said that the magazine got away from telling good stories and instead became fixated with minutia, like the color of Tom McLaury’s hatband at the O.K. Corral gunfight.

I often think of her wise words when we are planning an issue. I will always remember Elizabeth, for all of her guidance and support.