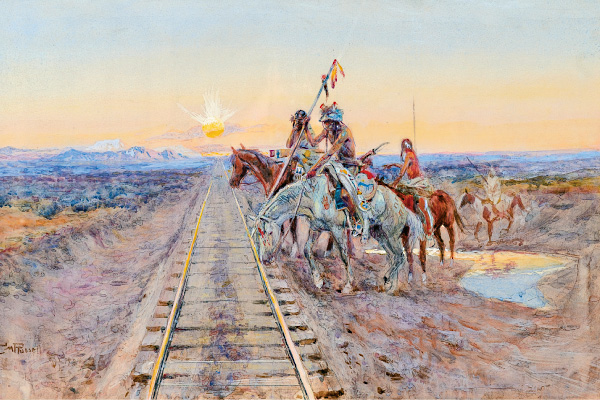 Art collectors were not surprised that the world-famous cowboy artist Charles M. Russell got his highest sale of the year with an American Indian artwork.

After all, the auction record for Russell holds at $5 million for Piegans, his luminous 1918 painting featuring four Indians on horseback crossing a meadow.

But some had to feel like the art gods were smiling on them when both the study and the final watercolor hit the auction block.

During a celebration marking the 150th anniversary of the artist’s birth, the Charles M. Russell Museum in Great Falls, Montana, auctioned off the study in its museum benefit auction on March 22 for a $350,000 bid. On July 26, Coeur d’Alene Art Auction in Reno, Nevada, put the final watercolor on the auction block, which sold for a $1.7 million bid.

Titled Trail of the Iron Horse, the paintings evoke sympathy for our nation’s Indians. These denizens on horseback have found the tracks for a new horse running through their country, the iron horse. The railroad pushed settlement into the frontier and effectively pushed out the Indians and their way of life.

As of press date, Russell’s painting also earned the year’s highest bid for an Indian artwork. Art collectors and history aficionados paid millions for artistic portrayals of frontier Indians. Shared here are some of the year’s top-selling Indian artworks sold at auction.