A Day In The Life Of A Chuckwagon Cook The cook didn’t just cook; he was also the barber, doctor, veterinarian, banker, arbitrator, letter writer, and father-confessor. 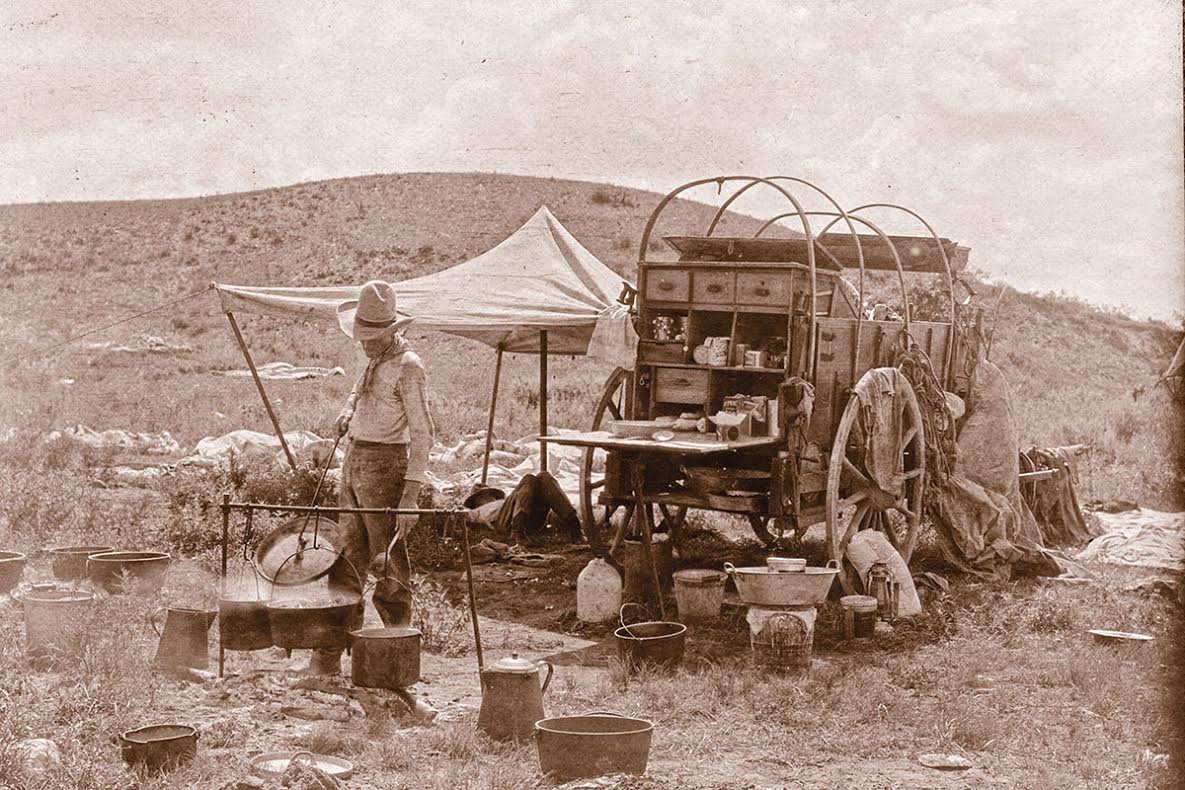 The most important man on a trail drive was the chuckwagon cook. That’s why next to the boss he was the highest paid hand. He was usually older and most likely a former drover.

How well the cowboys ate depended on the creative skills of the cook. He might slaughter a calf once in a while to break the monotony of beans and sow belly. He might jerk the leftover beef as it wouldn’t keep long otherwise.

Sowbelly (bacon) was salt pork fat from the back and sides and belly of a hog carcass cured with salt was well-preserved and could last a long time without spoiling.

He packed flour, cornmeal, and, until Arbuckle’s came on the market, green coffee beans, those ubiquitous pinto beans, baking powder, salt, sugar, sourdough starter, salt pork and canned goods such as peaches and tomatoes, the latter to head off scurvy. Along the way the resourceful one might gather up prairie chicken eggs to make a dessert. He could also make dessert out of dried fruits. They could also gather chili peppers and wild onions along the trail. And, there was always plenty of wild game of all shapes and sizes. A man would have to try awful hard to starve.

The cook’s normal day started hours before the cowhands climbed out of their bedrolls. Getting up around three in the morning he started by grinding roasted coffee beans to make his blend of coffee. The hand grinder normally would be mounted to the outside of the pantry box. Cowhands demanded coffee so strong it would “float a horseshoe.” Then pinching some sourdough from the crock stored in the pantry as he blended this with more flour and water to make a large serving of biscuits. Then he’d cook up some bacon or “sowbelly,” potatoes and sourdough pancakes or “flapjacks.” The chuckwagon didn’t travel with the herd. The cook would have to move on up the trail at a fast clip so chow would be ready for the mid-day meal. It took about two hours to get chow ready and the cowhands wouldn’t tolerate late meals. After the cowhands were fed breakfast, the cook would clean up the plates, pots and pans then move on ahead to prepare lunch before the herd arrived at the noon stop.

The noon meal was pretty meager, usually whatever was left from breakfast was warmed up and served. Afterwards the cook would clean up then go hell-for-leather to prepare for the evening camp, collecting firewood or buffalo chips along the way for the campfire.

The usual evening meal consisted of beans, salt pork, dried apples and an occasional beef steak.  A creative cook was worth his weight in gold.

Out on the trail the chuck wagon cook would have enough time during the day to soak beans in a pot.  He’d make camp and cook up a batch but they would have to be eaten right away.  Cooked beans spoil or sour quickly so cowhands didn’t eat them on the trail unless they were traveling with the wagon.  It’s been suggested you could soak them in your saddlebags but that doesn’t sound like a good idea.  Packing cans of beans wouldn’t be practical either

Cowboys in a line shack or at the ranch without an icebox would have the same problem. You’d have to eat ‘um right away.  After evening chow and while the cowhands were sitting around the fire drinking coffee and telling tales, the cook was busy cleaning up, feeding his sourdough starter and getting things ready to repeat the process the next day.

The drovers were paid about a dollar a day or thirty dollars a month. That would be in the neighborhood of $540 dollars in today’s dollars. The more experienced might make forty. Highest pay went to the trail boss who made eighty to ninety dollars a month and the cook was second highest. He made sixty to seventy-five. The wrangler was the lowest on the pay scale. He made about twenty-five. They all drew their pay at the end of the drive, which might be Abilene, or Dodge City or Montana.