An Uninvited Guest for Christmas 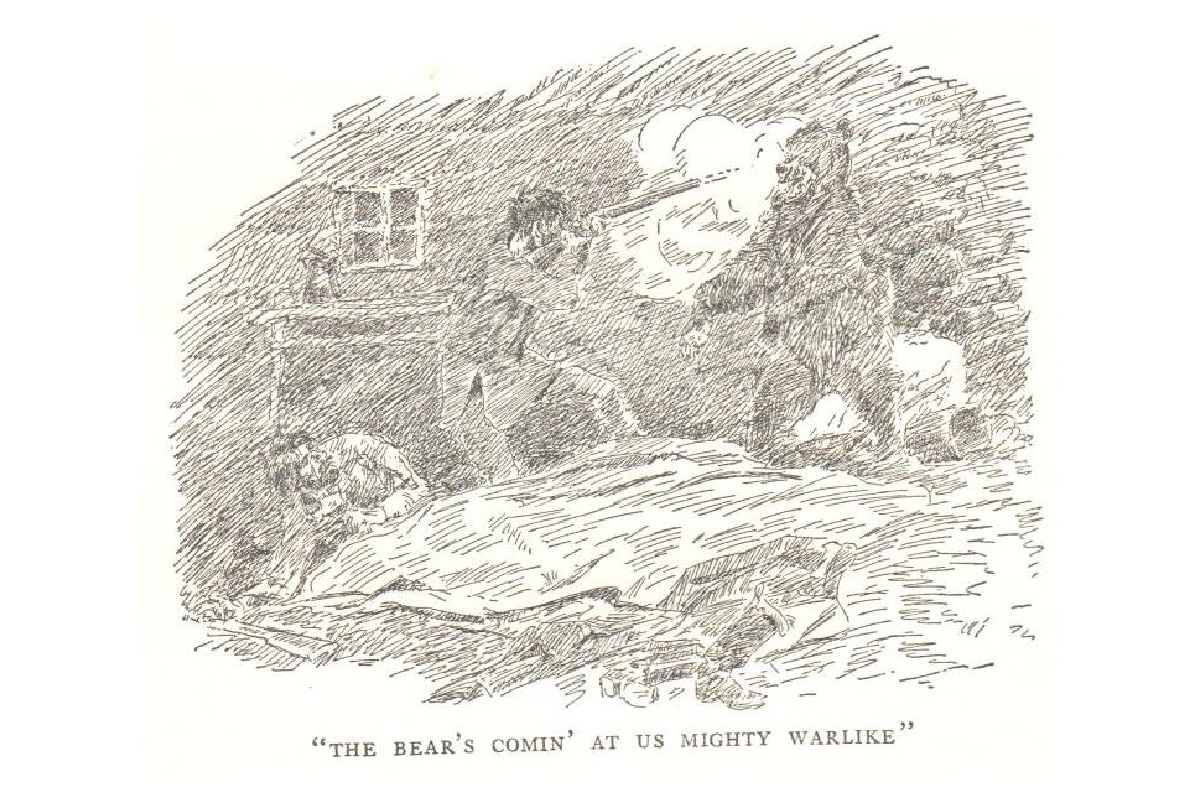 Once upon a time there was these unemployed two cowboys named Jake and Tuffy. It was December and there wasn’t much cowboy work, so they were spending the winter trapping and prospecting for gold.

They were riding through a narrow canyon when a blizzard hit. The wind was blowing up a gale and the temperature began to drop. Jake pulled out his pocket watch and looked at it to check the time, and it was so cold the hands on his watch was rubbing together.

Just about the time they was about to freeze spotted an old log shack a short distance off the trail.

The old building was pretty run down. It had two rooms, but the roof had collapsed on one end. They could tell by the animal smell there hadn’t been any human inhabitants in years. The floor was strewn with pinecones and animal droppings.

“Well, it ain’t no palace,” Jake said, “but this is where we’ll be spending Christmas.”

The storm raged outside but they built a warm fire then cooked up some beans and coffee on the coals and it got pretty snug in no time at all.

Tuffy kept glancing back at that back room with the roof caved in and had a notion to go see what was in there but its ghostly appearance made him change his mind.

“We ain’t got any socks to hang on the fireplace,” he said, “but I don’t think old Santy Claus would ever find this place in a million years anyway.”

Sometime during the night Tuffy was awakened by a shuffling sound. At first, he thought it was a trade rat looking for something to swap but when he opened his eyes to take a peek, outlined against the light coming from the fireplace he saw the backside of huge figure sitting there helping himself to the bean pot.

“Say, did old Santy find this place after all?”

That old grizzly rose to his full height…..about 8 feet.

Those two petrified cowboys were about as nervous as a long-tailed tomcat in a room full of rocking chairs.

Jake reached for his Winchester and jacked in a shell. He fired off a round, knocking that bear down. That grizzly got back up and started bellering and bawling, making more noise than a bunch of jackasses in a tin barn. He was on the warpath.

Tuffy grabbed his rifle and commenced firing. Between the barking of the rifles and the squalling of that bear it was starting to sound like a Saturday night dance in Tombstone.

About the time those boys ran out of ammunition it got really quiet in the place. They lit a fire and examined the wreckage. The old grizzly had cashed in his chips and since the boys hadn’t had anything to eat except beans for weeks, they skinned him and cut up some steaks.

The next morning things seemed clearer. That bear had been hibernating in that caved-in room for many a winter. The warmth of the fire made him think sleeping season was over, so he sauntered out and found someone had left him a half-eaten pot of beans.

Nearby was an old cap and ball rifle, a miner’s pick and a gold pan. The boys naturally figured the feller might have left his cache somewhere in the cabin, so they searched high and low. Sure enough beneath a flat rock on the hearth of the fireplace they found a buckskin pouch full of gold dust

Since the old prospector obviously had no family, Tuffy and Jake divided up the gold.

It turned out to be a pretty good Christmas after all. That ol’ grizzly bear provided plenty of meat and the gold would help ‘em make it through the long winter.

Charlie Russell was not only an eminent western artist he was also a great storyteller. I read this story many years ago in his book, Trails Plowed Under and told it to my college students every Christmas. Over the years I might have altered it a bit but the premise remained the same.