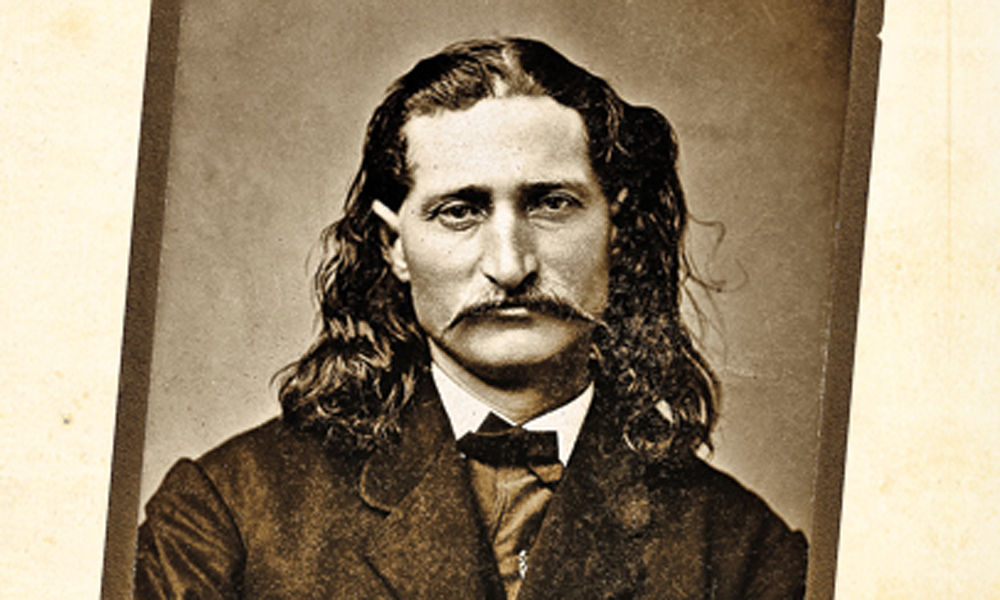 That’s how Wild Bill Hickok would have described it in 1876, if he’d lived to tell the tale. The month actually started out very profitably for the former Union spy, scout, lawman and flamboyant gambler. On August 1, Hickok took Jack McCall for every cent he possessed in a card game—all $110. It might have added insult to injury when Hickok offered to loan McCall money to have breakfast. McCall was back the next day, shooting Hickok in the back as he played cards in Saloon #10—holding the “dead man’s hand” of a pair of black aces and a pair of black eights.

Wild Bill’s funeral on August 3 was a major event in Deadwood. The doctor who prepared him for burial said, “Wild Bill was the prettiest corpse I have ever seen.” By the time he was put in the ground, McCall had been tried and acquitted–lying to the gullible judge that he was blinded by rage because Hickok had killed his brother years earlier in Kansas. But that trial was later ruled illegal and McCall was tried again in South Dakota in December and found guilty. He went to the gallows on March 1, 1877.

A loving footnote: Twenty-seven years later, on August 1, 1903, Mary Jane Canary, aka Calamity Jane, died of pneumonia at 51 and was buried next to her beloved Wild Bill in the Deadwood cemetery.

The War Department had a smart idea on an August day in 1866, when it ordered the army to train Indian scouts for all the territories in Indian country. Within a year, the number of Indian scouts reached 474.

August saw the 38th state admitted to the Union when Colorado came in on August 1, 1876.

On August 5, 1863 in Massacre Canyon, Nebraska Territory, a tribe of Sioux killed 59 Pawnee.

Jesse James’ last robbery, netting only $1,500, occurred on August 7, 1881 near Glendale, Missouri. His gang, including Frank James, Charles Ford, Wood and Clarence Hite and Dick Liddell, stopped the train by piling large timbers across the tracks.

August said goodbye to the Texas Rangers after a century of continuous service when they were merged with the State Highway Patrol of Texas on August 10, 1935. It also said goodbye to John W. Swilling, the founder of Phoenix, who died August 12, 1878 in a Yuma jail where he was held on suspicion of a stage coach robbery. And it was a sad August 15 in 1935 when “cowboy philosopher” Will Rogers was killed in an airplane crash.

It was August 17, 1862 when Chief Little Crow and his Santee Sioux stopped waiting for the government rations that never came and launched the bloody Sioux Uprising.

The first notch on his belt for Billy “The Kid” came on August 17, 1877 in Camp Grant, Arizona Territory, when Billy killed the bullying blacksmith Frank Cahill. Billy was locked up, but escaped and started his life on the run.

One of the bloodiest August days was the 21st in 1863 when William Clark Quantrill led a force of 450-mounted confederate guerrillas against the town of Lawrence, Kansas. As many as 200 residents were killed, banks were looted and about $1.5 million in property was destroyed.

And we can’t forget that August 25, 1877 records the first duel between two women over a man. Madam Mattie Silks and Kate Fulton chose pistols, squared off, and missed each other. That led to a fist fight that left Kate with a broken nose. She left Denver the next day on the stage.