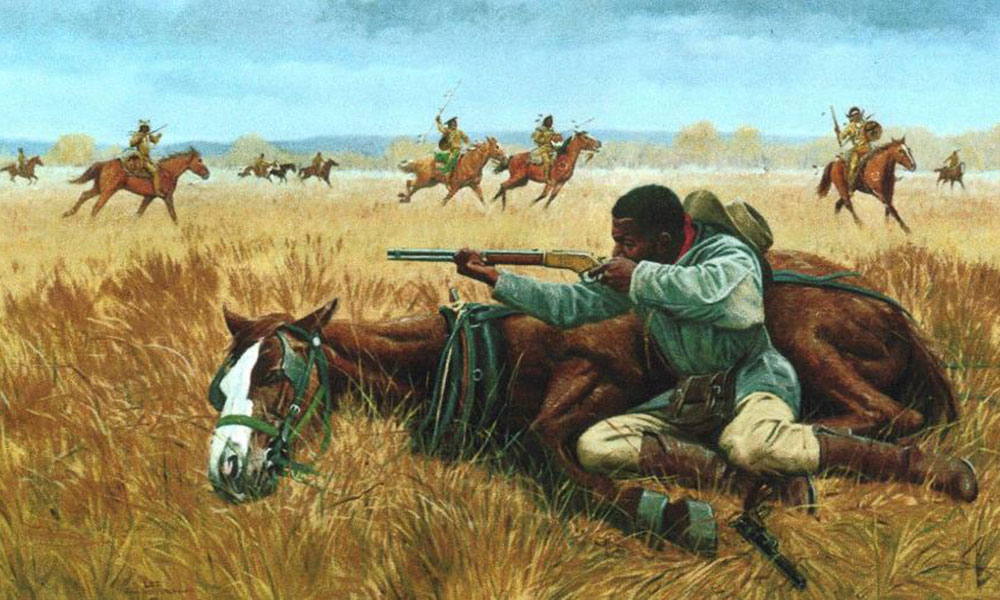 The drama began on October 13th,  when a Kiowa and Comanche war party of several hundred swept down to where Elm Creek joins the Brazos River, about 10 miles above Ft. Belknap, Texas. The soldiers had been called away from the area and the fort abandoned. Many of the men from the settlements were away at the time of the raid.

Although they were legally slaves, the Johnson family been allowed to live as free people. They’d been inherited and then set free by a Texan named Allan Johnson, who abhorred slavery.

As the foray continued the valiant women grabbed guns and fired while the children re-loaded the rifles and pistols. One woman, Susan Durgan was cut down, her body stripped and mutilated. As the warriors overwhelmed the defenders and swept into the Johnson house, two of them got into an argument over who captured Johnson’s oldest boy.  Custom dictated that to avoid contention among the warriors the issue was settled by killing the youngster. They threw the rest, including Mary Johnson, Elizabeth Fitzpatrick and the captive children on the backs of their horses and rode off.

Other settlers managed to save themselves from the raiders by hiding in caves on the banks of the Brazos, or in the brush thickets. One, Doc Wilson made a run for it, but an arrow struck him in the heart. He called out to his friend, “Hamby, I am dead.” Then he jerked the arrow out of his breast and fell to the ground mortally wounded.

The Comanche, responding to commands by their bugler, charged attacked home after home. When their chief, Little Buffalo was hit, the bugler mournfully sounded retreat and the warriors withdrew.

It was a classic Texas Indian raid; a lightning-quick surprise attack on the settlements, take captives and booty and return to their sanctuaries on the Llano Estacado. The settlers defended themselves as best they could, either by heroism or flight. As often happened in the real West, the cavalry didn’t arrive in time.

Afterwards, eleven bodies were found and buried.  Eleven houses had been destroyed and several women and children carried off.

Britt Johnson arrived back from Weatherford to find his son dead and buried; his wife and two children missing. Mournfully, he waited until spring then he set out to get his family back. The settlers took up a collection to help finance his one-man expedition. He took a packhorse, rifle, two six-guns, some food and blankets and rode for the Wichita River, some 60 miles away.

Along the way he met a lone Comanche and speaking in Spanish made “peace.” The black man was not unfamiliar to some of the Comanche language. He learned the Comanche had a white woman and the Kiowa, some blacks.

Soon, more warriors arrived with stolen horses which Johnson recognized from the recent raid. He knew his family couldn’t be far away. Again he had a peace parley.

He rode with them for a few weeks and was able to persuade them to help him find and ransom his family and the other captives.

In a Comanche camp he found Elizabeth Fitzpatrick and learned from her that some 20 warriors had died in the Elm Creek Fight and her son, 12, had been killed after he became ill and couldn’t keep up with the party. She begged him to pay the ransom no matter what the cost.

Johnson made several more trips into Indian Country before the Kiowa finally agreed to ransom his family in 1865. In this venture he was assisted by his Comanche friends who advised him of the trading tricks of the wily Kiowa.

In time all the captives were ransomed and returned to their families except for little Millie Durgan, whose mother had been slain in the Elm Creek raid. She’d been adopted into a chief’s family and wasn’t for sale.

Millie remained with the Comanche for the rest of her life. She was too little to remember her white blood and background and all her life was held in high esteem by her tribe. She married happily and years later when she was found living on a reservation in Oklahoma. When the governor of Texas asked what the state might do for her, she said “Nothing.”

Johnson was not harmed by the Comanches as he rode alone in their country. Some say they left him alone because he was a man of color. Others say they admired his courage.

Fate was less kind to Britt Johnson, the courageous black man who had ridden alone into the heart of hostile country many times in an attempt to rescue his family.

His dauntless courage had won him great respect on the Texas frontier and with three black partners, started a successful freighting business between Weatherford and Fort Griffin. But in 1871, ten miles east of old Fort Belknap, a Kiowa war party attacked their wagon train killed them all.

Britt Johnson demonstrated the highest ideals in frontier spirit. Disregarding his own safety, he was willing to risk his own life to rescue others.