Buck Taylor: The Original King of the Cowboys 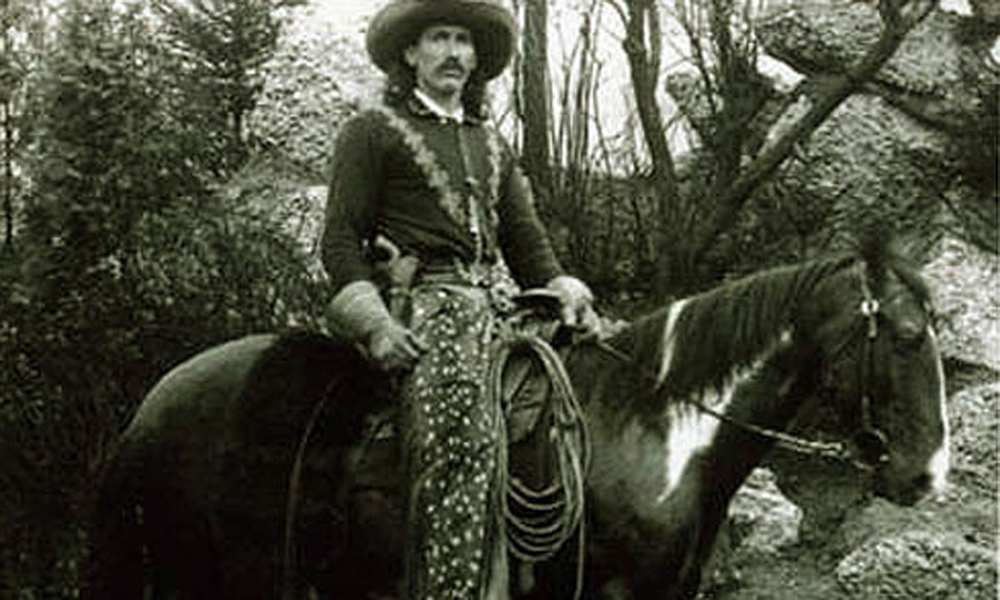 When Bill Cody introduced his “Buffalo Bill’s Wild West” in 1883 a featured presentation was Custer’s Last Stand. The historic battle had occurred just seven years earlier. The star of the show and playing the role of Custer was a tall lanky kid from Texas named William Levi Taylor. At the time the average height of a man was five feet eight inches William Levi Taylor stood six feet four. Buck was born in Fredericksburg in 1857. He literally rode “tall in the saddle.” He was known for his love of biscuits. One time he ate twenty-four at one setting.

Buck was a genuine Texas cowboy. He and his brother Bax had trailed a herd from south Texas with Cody’s partners, Frank and Luther to the Cody-North ranch on the Dismal River near North Platte, Nebraska. The boys were orphaned when their father was killed during the Civil War and their mother died soon after.

After taking the herd north the boys were hired on at Cody’s ranch. Bax’s specialty was bustin bronc’s. Luther North called him the best he’d ever seen. Their sister, Mary, was a good hand too. She had a reputation as being able to “ride the worst broncho, or rope the most refracting old cow in the county.”

When the show was organized Cody created heroes out Indians, the cavalry and all the rest. The only western figure left was the cowboy. At the time the term “cowboy” was derogatory and associated with outlaws or the less-than-glamorous task of cleaning screwworms out of some injured cow or dragging her out of some bog hole.

Buffalo Bill decided to upgrade the image and make the cowboy a “star” in the show. His long, tall biscuit-eater from Texas and was going to get a makeover and be billed as “King of the Cowboys. He created a biography where Buck was a “brave orphan boy from Texas, who grew up with great hardships. He was incorruptible and was always fighting on the side of good; a giant of a man, yet good to his mother, always humble. ”

They dressed him in a red shirt and embroidered sombrero he was an instant success with audiences. They say nobody was more surprised than Cody himself.

As a result, Buck caught the attention of dime novelist Prentiss Ingraham, the author of Buffalo Bill’s dime novels. He wrote a series of novels where Buck was the hero. In one he rescued the daughter of Texas Ranger Captain McNally, probably based on the real Texas Ranger Captain Leander H. McNelly. In the story Buck is the hero who rescues a damsel in distress. Those familiar with the B-Westerns of the 1930s and 1940s this theme was standard fodder.

Buck stayed on with Cody, appearing before Queen Victoria in 1887 on the first European tour. He left the show in 1890 when he and Bax established their own ranch. Buck continued performing and in 1894 he had his own Wild West Show. He was arrested in San Francisco for cruelty to animals when the Humane Society took umbrage because he was roping and riding steers. A jury found him not guilty.