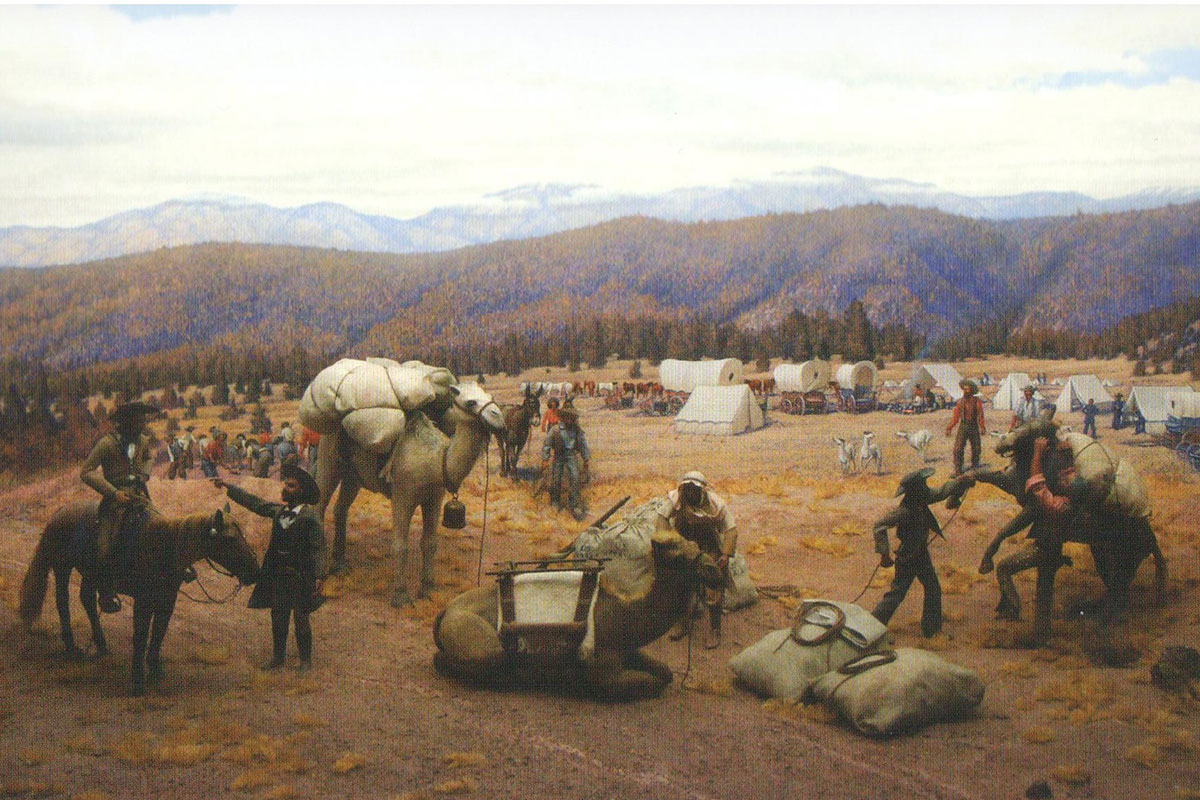 In the years following the Mexican War and the Gadsden Purchase, the United States was planning to survey several areas ranging from the Canadian border to the Mexican border for future highways and railroad lines. One of those was a wagon road from Albuquerque to Los Angeles along the 35th Parallel that would suffice until railroads could be built. Much of the high desert was a long way between water holes. A beast of burden was needed that could live off the local browse, carry a heavy load and travel faster than a mule. Most important, the Army Corps of Topographical Engineers needed an animal that could go a long distance without a drink of water. Secretary of War Jefferson Davis decided to test the feasibility of using camels as beasts of burden to cross the waterless high desert land.

When the engineers imported 34 camels in the spring of 1856 to survey the wagon road from Albuquerque to Los Angeles the mule lobby in Missouri threw a hissy. “Camels,” they said, “were ill-tempered, smelly, stubborn and ugly. Worst of all they wouldn’t learn English.”

In reality they didn’t like the competition. However, Lt. Ned Beale, a former naval officer now with the engineers, who implemented the camel survey and knew them better than any other American, championed their attributes even calling them “lovable and docile.”

He had a hard time convincing others, especially when whole pack trains were known to stampede at the mere sight of the strange-looking beasts.

Those camels passed the supreme test when Beale was challenged to pit them against packers’ mules on a 60-mile endurance race. Using six camels against twelve mules, a 2.5 ton load was divided among the camels and two Army wagons, each drawn by six mules. The camels finished the race in two and a half days while the mules took four. Each camel was packing 700 pounds, twice what the mules could carry. At one point the camels went 26 hours without water while the mules and horses suffered. The camels didn’t falter. On the contrary, they gazed at the frenzied animals with disrespectful contempt.

That seemed to settle the argument but the Great Camel Experiment was eventually doomed by the powerful mule lobby and the Civil War that was looming on the horizon.

Some of the camels were sold at auction and the rest were turned loose to roam the deserts of western Arizona and California.

The last descendent of the original herd was captured in the wilds of Arizona in 1946.