Drugs on the Frontier 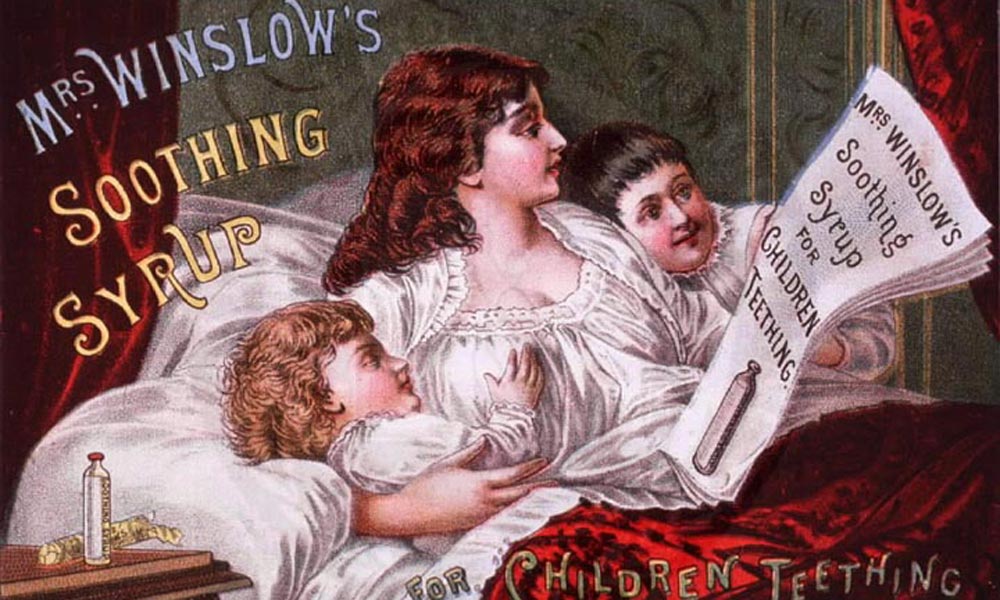 During the 19th century drugs were widely available and affordable. They were often in greater demand than alcohol. Used for medical treatment they often morphed into recreational. Women took it for the “vapors” or a bout of melancholy. Vapors was a term used for mental depression or hypochondria. Drugs were also a chief factor in a lot of violence in the Old West.

Infants weren’t safe from these drugs. Mrs. Winslow’s Soothing Syrup for babies, for example, had 65 mg per fluid ounce, morphine. Alcohol was another primary ingredient. Not surprisingly, it effectively quieted restless infants and small children especially for “teething.” It was widely marketed however, in 1911 the American Medical Association issued a publication titled “Nostrums And Quackery” in which, in a section called “Baby Killers”, it incriminated Mrs. Winslow’s Soothing Syrup. The product was nevertheless not withdrawn from sale until 1930.

Morphine was the most common narcotic on the frontier. Derived from the opium poppy which has been cultivated for 3,500 years. It was first extracted in 1804 and was the first narcotic derived from a natural plant. It remains today one of the most powerful pain relievers because it acts directly on the central nervous system. It’s also one of the most addictive; too large a dose can be deadly.

Commercial marketing began in the 1820s and after the invention of the hypodermic needle in 1853 its use expanded, especially in battlefield surgeries. It’s estimated that a half-million Civil War veterans became lifetime addicts.

Morphine was hard to make and difficult to obtain so opium became the alternative. For a century it was the recreational drug of choice. It was also derived from the resin of the same poppy and contains 16 % morphine.

Prior to 1909 there were no restrictions on its import or use. Ironically, it became a cure for morphine addiction. Opium dens usually operated in the Chinese section of town. They featured private rooms, couches, beds and even prostitutes.

Chuckwagon cooks on the open range, railroad station managers, and train porters all kept a supply of opium on hand for their weary charges.

Opium is the raw tar extracted from the un-budded flowers of the opium poppy. Small cuts are made along the bud, then tar drips out from the inside of the bud and dries on the outside. After the tar is dry then it is scraped off the bud for use.  It was usually smoked in Chinese opium dens.

The most common form for the ingestion of opium was laudanum. It was made from a tincture of opium and alcohol, flavored with vanilla, cherry, orange, lemon or almond. It was prescribed for ailments ranging from snake bite and gunshot wounds to migraines, menstrual cramps, venereal disease, worms, and diarrhea. It was regarded as the panacea for all that ails you. It was a tincture of opium. In other words it might be a mixture of alcohol and opium with opium being the chief ingredient. It could be packed in a bottle and drank to kill the pain of everything from a toothache to a serious injury.

Over time the addict built up a tolerance for it and needed larger doses. Addiction came on quickly and was hard to break. It was inexpensive and widely available and regarded as a working or lower class indulgence.

Heroin comes from the German word heroisch because users claimed it made them feel “heroic.” It was not in widespread use in the 19th century and was first synthesized in 1874.

Cocaine was also common a drug used on the frontier. It’s a stimulant rather than a narcotic. It was first used in the 1860s to treat morphine addiction and in a few years it was available in general stores as a remedy for minor ailments. It could be mixed with chewing gum, or tobacco and chewed. It was mostly a pick-me-up pep pill and frequently used by soldiers to fight fatigue.

The popular soft drink Coca-Cola was invented in 1886 by Civil War veteran John Pemberton of Atlanta, Georgia. He’d tried unsuccessfully to invent pharmaceutical drugs and soda fountains were becoming popular because of prohibition so creating a soda seemed to him a good idea.

When Asa Griggs Candler became sole owner following the death of Pemberton, he sold Coke as a patent medicine as they were very popular at the time. Coke was advertised to relieve fatigue and headaches. In 1898 Congress wanted to pass a tax on all medicines so Coke began marketing itself as a beverage.

Coke gets its name from its coca leaves and kola nuts medicinal extract. Just how much cocaine was originally in the formulation is hard to determine, but the drink undeniably contained some cocaine in its early days. Cocaine was still a popular pick-me-up drink when public concern about the addictive effects of cocaine began in the 1890s, the real opposition though was still years away.

Candler believed his product had to be descriptive with the name so coca leaves remained in the syrup and Coca-Cola didn’t become completely cocaine-free until 1929.

Coca-Cola was not unique in the practice as cocaine was a popular ingredient in many patent medicines at the time.