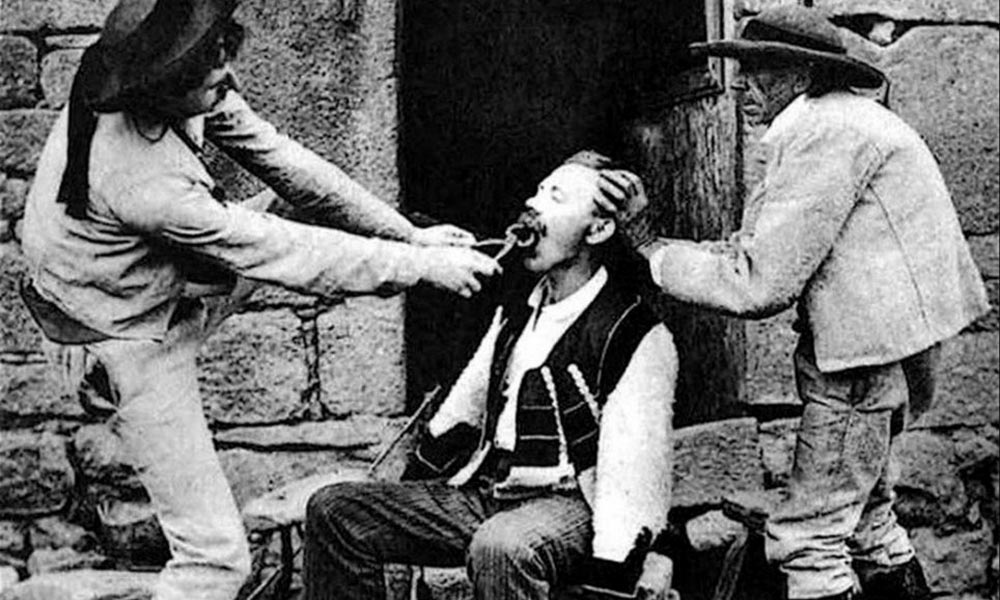 Professor Joanna Bourke wrote “Agonizing toothache, horrifying extractions and barbaric tools have cast a large shadow over our dental past.” No truer words were ever spoken.

Trained dentists didn’t exist until the 1800s and prior to that the care of the nation’s mouths was in the hands of blacksmiths and barbers who doubled as surgeons.

Like something right out of the Spanish Inquisition, they wielded pliers for pulling teeth or devices resembling bottle openers which relied on the hapless patient’s jaw for leverage. It wasn’t uncommon to accidentally dislodge the patient’s jaw during a “procedure.”

The profession was a back-street horror show for hundreds of years, run by ham-fisted amateurs who were sure to leave their patients in agony that is, if they survived.

The arrival of affordable sugar from the West Indies in the mid-1600s led to soaring cases of tooth decay.

Extraction was almost the only treatment available for a toothache until the middle of the 19th century and it wasn’t something to look forward to.

Thousands of people died from botched treatment, infections and other complications so it was hardly surprising that the dentist’s chair was regarded with sheer terror.

If you were lucky there might be a shot of whisky to numb the pain but otherwise all that was offered was a prayer. Until relatively recently rotten and neglected teeth were part of daily life.

The invention of the mass-produced toothbrush in 1780 helped but it was too expensive for the poor and was often a “community toothbrush.”

The first chemical used for pain relief was nitrous oxide, also known as laughing gas was invented in 1799.

The drill was invented during the Victorian Era. Operated by a foot pedal and a belt that turned the drill, the process was slow but it sometimes enabled dentists to drill away the decayed part eliminating the painful extraction.

Out West one of the hazards a dentist had to deal with were temperamental gunfighters. Outlaw Clay Allison, suffering from a toothache, visited a dentist in Cheyenne, Wyoming, who began drilling on the wrong tooth. After having his bad tooth repaired by a different doctor, Allison returned to the offending dentist, pinned him down, and extracted a tooth with a pair of pliers.

Dental patients of the early 20th century had a magic bullet: cocaine-laden toothache drops. Cocaine was also used as a painkiller. It was injected into the jaw in liquid form.

In the early 20th century dentistry was still so expensive that some people chose to have all their teeth pulled to spare themselves a lifetime of pain. Having all your teeth removed was considered the perfect gift for a 21st birthday or a newly married bride.