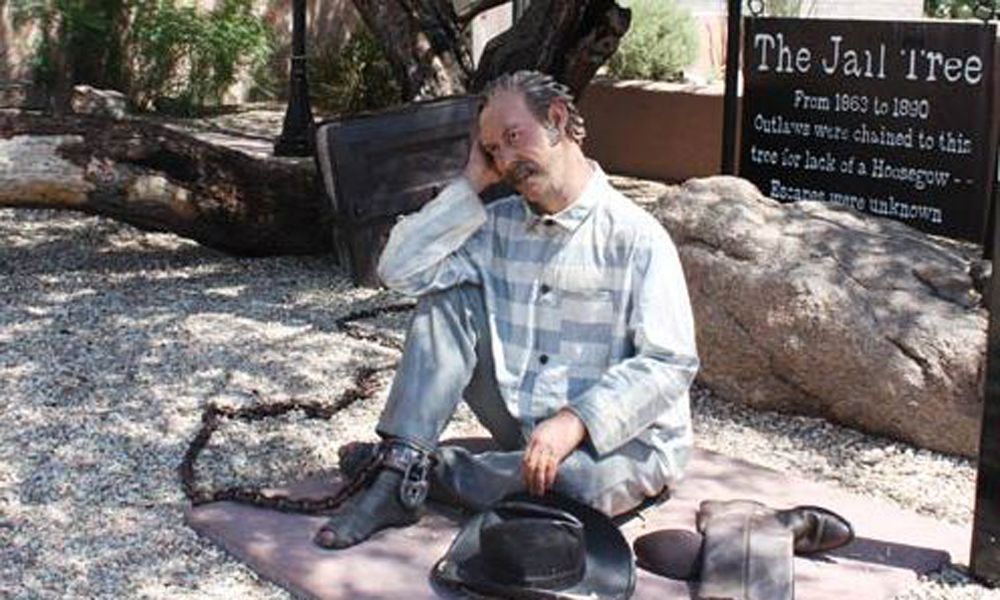 In the rough and tumble towns of early Arizona, churches, schools and jails were most conspicuous by their absence.  Holbrook became the county seat of Navajo County in 1895 and didn’t get around to erecting a church until 1914.  During that time, it claimed to be the only county seat in the United States that didn’t have one.

At the other end of the frontier social spectrum were jails.  Most of these early day calabozos were made of adobe and the inmates could dig their way out with very little effort.  Since the majority of scoundrels were locked up for public drunkenness and were turned loose after they sobered up, it didn’t seem to make much difference anyway.

Overcrowding was a problem even in those days.  One Saturday night in Jerome the jail was filled with drunks so the remaining were chained to a large mill wheel.  The next morning the thirsty imbibers picked up the wheel and carried it down to the nearest saloon and demanded an ax to widen the door so they could haul it inside.

The citizens of Wickenburg chained their rowdies to a big mesquite tree and when the tree became overcrowded, usually every Saturday night, the surplus were chained to a huge log.  One night Big George Sayers, a notorious reprobate from Gunsight, became drunk and disorderly.  After a long struggle he was finally chained up to the log.  Big George had the dubious reputation of possessing the most lurid, creative and varied vocabulary in the entire territory.  It was said he would lie awake at night inventing new oaths which he would languish on dogs, people, his horse, all animate and inanimate objects he might encounter.   He awoke the next morning un-repented, thirsty and bellowing like a range bull, awakening the whole town and half the county. When nobody responded, Big George took matters into his own hands, shouldering the log and heading for the nearest saloon.  He demanded a drink.

He went on to become the subject of tall tales. They say George’s voice could sidetrack a cyclone.  One time he was jumped by a mountain lion. George turned and let out a howl that petrified that lion in his tracks.  Then, he took it into Gunsight and put it in the park as a statue.  He used to fish by standing on the bank and letting out a loud bellow.  The shock stunned the fish and they’d rise to the surface where George could wade out and pick out the big ones.  He always got his limit.

When the citizens of Clifton finally got around to building a jail they wanted it to be escape proof.  So they hired a hard rock miner named Margarito Varela to carve one out of solid rock.  When he was finished Varela took his pay and headed for the nearest saloon where he proposed a toast to the “World’s Greatest Jail Builder.”  Apparently the other imbibers weren’t impressed and refused to toast, whereupon Varela got angry, pulled his six-shooter and shot a hole in the ceiling.  They pounced upon him and carted him off to the calabozo.  The “World’s Greatest Jail Builder” became the first inmate in the jail he built.

Justice was much more practical and expedient on the Arizona frontier than it is today.  Take for instance, Tucson.  During the 1860’s the Old Pueblo was being terrorized by a bunch of scoundrels who’d been chased out of California by vigilantes.  Captain John C. Cremony wrote in his classic book, Life Among the Apaches, that southern Arizona was “cursed by the presence of two or three hundred of the most infamous scoundrels it is possible to conceive.  Innocent and unoffending men were shot down or bowie-knived merely for the pleasure of witnessing their death agonies.  Men walked the streets and public squares with double-barreled shot guns, and hunted each other as sportsmen hunt for game.”

Probably a stretch but you get the picture.

Mark Twain probably said it best when he quipped “It was no place for a Presbyterian, so I chose not to remain one.”

So, the city fathers, led by businessman Mark Aldrich, decided upon a novel idea to rid the town of these unwanted scoundrals for good.

Since Tucson had no suitable jail, a public whipping post was set up in the plaza.  The standard punishment for crimes was a public whipping.  But there was a catch.  The culprits would be given their punishment in two doses on successive Saturdays.  Following a speedy trial, the rascals were given a severe public spanking by the Mexican town, who just happened to be built like one of today’s NFL linebackers.   Afterwards, they were told to come back next Saturday for the second installment.

It goes without saying that when the following Saturday rolled around those villains made sure they were a long ways from Tucson.