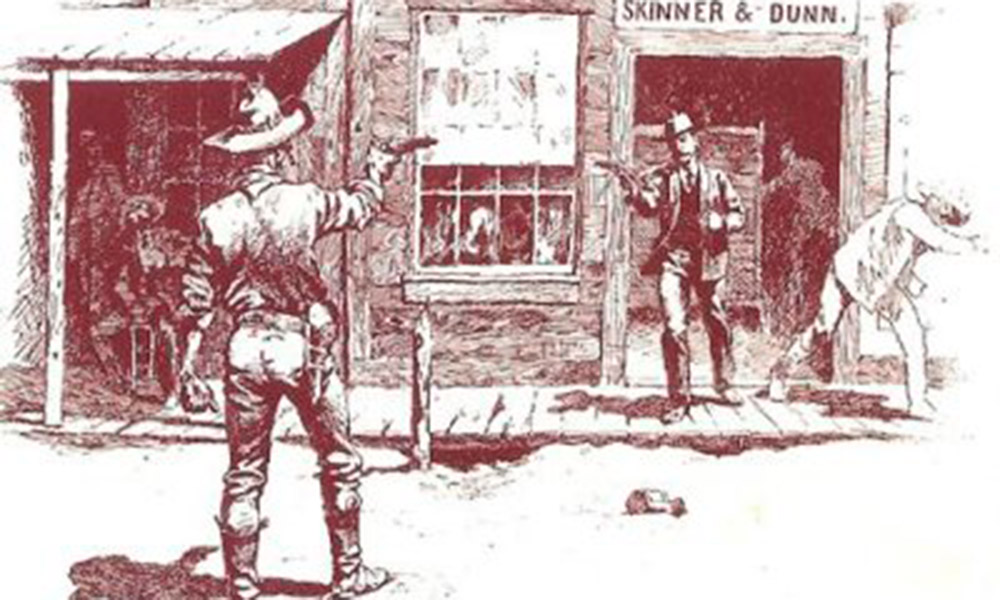 Jim Leavy was born in Dublin, Ireland in 1842. His name was often misspelled Levy and this has led some to believe he was Jewish however there is no provenance that he was. He came to America with his family in 1856 as a young man he drifted out west to Nevada and took a job as a miner in Pioche.

Outside the Midnight Star Saloon on the evening of May 30th, 1871, he saw two men having a heated argument.  One of them, Mike Casey pulled his pistol and shot the other, Tom Gasson. It was a case of cold-blooded murder. Gasson lay on his death bed for a week and before he died, bequeathed $5,000 to the man who avenged his death.

At Gasson’s inquest Casey adamantly claimed self-defense. As an eyewitness to the shooting, Leavy was called to testify and disputed the claim saying Casey fired first.

Later, Casey caught up with Leavy and challenged him to a fight.  Leavy, who was unarmed went off to secure a weapon and when he returned the two squared off in an alley. Leavy got off the first shot, his bullet creasing Casey’s skull. He fired again this time hitting Casey in the neck and then whacked him over the head with the barrel of his pistol. Casey went down but a friend, Dave Neagle, who was later a lawman in Tombstone, Arizona, was standing nearby, jerked his gun and fired, hitting Leavy in the jaw. The wound would leave him permanently disfigured.

Leavy was arrested and charged with murder but was acquitted for self-defense.

Leavy also collected the $5,000 bounty and it dawned on the three-dollar a day gig working in the mines paled when compared to what could be made as a hired gun and begun his new career.

Leavy had another gunfight on the night of March 9th, 1877 in Shingle and Locke’s Saloon in Cheyenne, Wyoming when he and a man named Charlie Harrison got into an argument over a game of cards. It was said Leavy insulted Harrison because of his Irish heritage which is odd because Leavy was also from the Emerald Isle.

They met in the street in a classic Old West shoot out. Harrison jerked his gun and fired but in his haste missed. Leavy took his time and fired just one bullet through the haze of smoke and got his man. Again, he was acquitted.

Leavy seems to have been a natural with a gun and his fame spread as he drifted to such towns as Deadwood, Virginia City, Leadville and Tombstone. Like many gunfighters he usually hired out as a regulator or worked as a professional gambler.

There’s no way to prove it but it’s said he engaged in and survived sixteen gunfights. One newspaper referred to him as a “pistoliferous gambler.”

Both Wyatt Earp and Bat Masterson praised his skills as a gunfighter. Leavy seems to have been a believer that speed is fine but accuracy is final, or as Earp said, “Take your time….in a hurry.”

Jim Leavy eventually settled in Tucson where on June 5th, 1882 he got into an argument with a faro dealer named Johnny Murphy in the Fashion Saloon. The two hurled insults but since Leavy was unarmed the dispute ended without gunplay.

Afraid to face Leavy in a shootout, Murphy enlisted two pals and they set an ambush outside the Palace Hotel where Leavy was staying.

When Leavy walked out the door unarmed, the three men sprang from the shadows and gunned him down in cold blood.

The three assassins were jailed but on the night of October 23rd they overpowered their jailer and broke out of the Pima County jail. A reward was offered for their capture.

It was claimed by some local politicos that the Democrats had assisted in their escape in order embarrass Bob Paul the Republican candidate for sheriff.

The three were captured in the White Mountains and returned to Tucson for trial. As so often happened with justice Old West style, Murphy and Dave Gibson were later acquitted. However, the third gunman, Bill Moyer was given a life sentence.