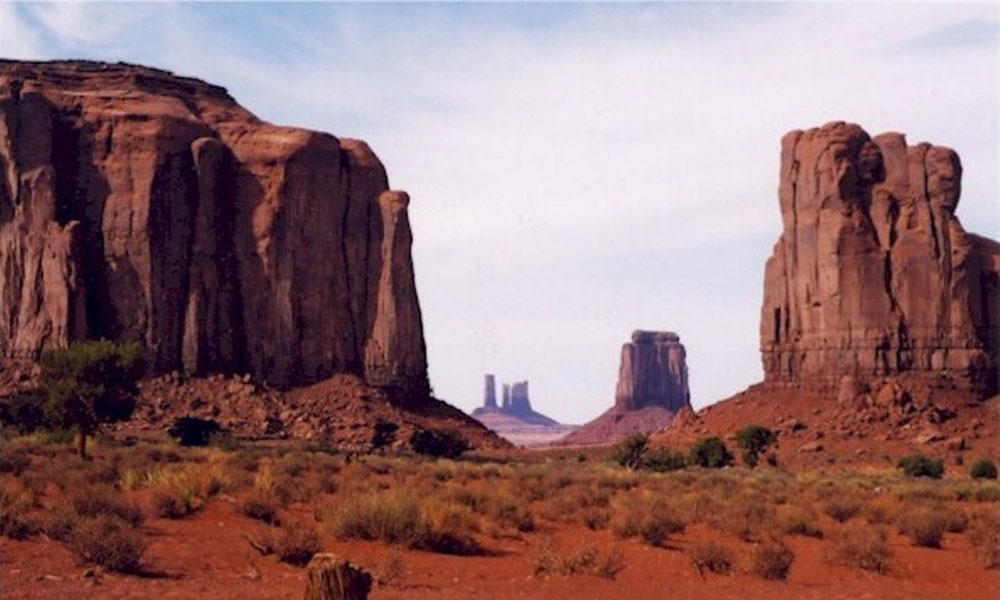 The year was 1938 and the Navajo were in the deep depths of the Great Depression.  Harry Goulding, proprietor of Goulding’s trading post on the Arizona-Utah border had an idea to help the economy by recruiting film makers to use the Monument Valley area as a location for filming their westerns.  Harry and his wife Mike (her name was really Leona but Harry claimed he couldn’t spell it so he re-named her Mike), loaded some of the spectacular black and white photographs by Josef Muench, that had appeared in the Arizona Highways Magazine and drove to California to meet director, John Ford.

According to Harry, Mr. Ford’s secretary asked if he had an appointment.  When he said no, she told him Mr. Ford wasn’t available to meet with him. Harry said he was from Navajo Land where time didn’t matter and he had plenty of time to wait. He proceeded to roll out a Navajo blanket, sat down and made himself comfortable.  The flustered secretary got an assistant director to help throw Harry out of the office, but in the process, Harry was able to flash-card Muench’s photos in his face. Before long, both gentlemen were on the floor with the pictures spread out before them.

“Mr. Ford needs to see these” the assistant director finally said and went and got the famed director.

John Ford was looking for a location to film what was to become the classic western movie, “Stagecoach,” and after looking them over he asked where the pictures were taken.

Ford asked if he could build the facilities to feed and house a film crew in two weeks.  Harry said he could if he had the money and Mr. Ford wrote him a check carte blanche.

John Ford and his cast and crew, which included a young B Western actor named John Wayne, arrived a couple of weeks later, and Goulding was true to his word.  The facilities were ready and the Navajo were prepared to become Apache for the camera.

The film, Stagecoach, based on the 1937 Ernest Haycox novel, “Stage to Lordsburg,” went on to become a classic and John Wayne became a star.  At last, the world now knew of a spectacular land of salmon-hued buttes and mesas etched by the elements of wind, sand and time called Monument Valley.

Over the next few years, Ford would return to the area many times where he is still revered by the Navajo. In the films, they played Comanche, Apache, Cheyenne and Lakota but they always spoke their own language in the films.