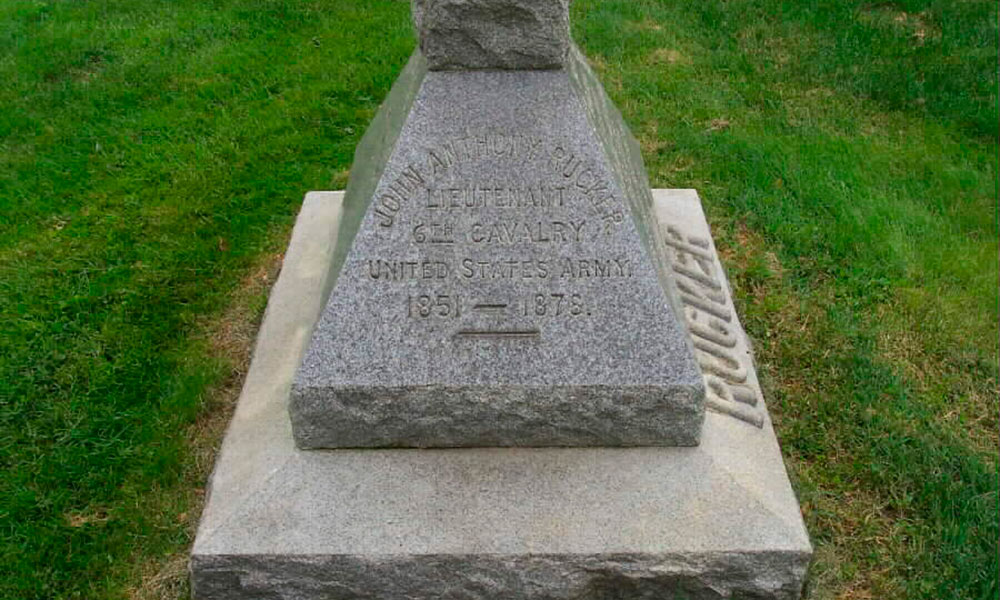 On December 2nd, 1876 a group of Bedonkohe Apache, probably led by Geronimo stole some horses near Camp Crittenden on Sonita Creek in southern Arizona a few miles north of the Mexican Border. A report was sent to Fort Bowie, the base of operations for 2nd Lt. John Rucker and his Company C Apache Scouts.

Rucker with ten soldiers and thirty-four scouts left Bowie on December 11th, arriving at Crittenden, six days later where he picked up the hostiles trail. The scouts followed the trail east to the Huachuca’s, across the San Pedro River and northeast to the Chiricahua’s. Hoping to throw them off the trail the Apache headed towards Steins Peak, then turned south towards the border. On December 30th, Rucker returned to Bowie to replenish his supplies.

Geronimo probably thought Rucker had given up the chase but the tenacious young lieutenant was determined to continue the pursuit. On January 4th, 1877, he left Bowie with a surgeon, seventeen troopers from the 6th Cavalry and his Apache Scouts along with Chief of Scouts Sgt. Jack Dunn.

It was on one of these campaigns that Dunn made the discovery of silver where Bisbee, destined to become one of America’s greatest copper boom towns.

Dunn was searching for a spring in the vicinity of today’s Castle Rock in Tombstone Canyon when he noticed an interesting outcropping and stopped to investigate. As was common on the campaign trail, soldiers spent one eye looking for Apache and the other looking for a promising outcropping. Sergeant Dunn couldn’t have known it at the time, but this one located in an isolated little canyon not far from the Mexican border would become known as the “Glory Hole” and the Bisbee district in which it was located was destined to become one of the richest copper-bearing areas in the world.

Back at Ft. Bowie, Dunn recorded his name along with the names of two others in his party, Lieutenant Tony Rucker and T.D. Byrne. The claim, filed on August 2nd, 1877 was named the Rucker.

Later at Fort Bowie, Dunn and Rucker would partner with a prospector named George Warren. They were too busy campaigning for Apache file their claims so Warren was to file claims for the three men. However, he filed claims for himself and some friends, cheating Rucker and Dunn out of their claims. The claim was the fabulous Copper Queen and should have made millionaires out of the two discoverers.

Meanwhile, Rucker and his men returned to Stein’s Peak at Doubtful Canyon, north of todays, I-10, near the Arizona-New Mexico border where they picked up the Apache trail again and followed it south to the northern part of the Animas Mountains in southwest New Mexico.

They located the camp and at daybreak, January 9th, 1877 and opened fire. The warriors were just heading back to their wickiup’s following an all-night dance and were caught by surprise. In shock many took off without their possessions and weapons. A rear guard opened fire while the others tried to escape. The Apache scouts charged and the warriors fled. Rucker’s men captured sixteen lodges, weapons and other equipment along with most of the herd. Among the captives was a 5-year-old nephew of Geronimo.

Geronimo, in his autobiography, recalled the stunning defeat later saying it caused him to return to the reservation at Hot Springs, New Mexico.

On November 27th, 1877, Rucker was on the trail of another Apache band. He left Fort Bowie, vowing to cross the Mexican border if necessary where he thought the renegades were holed up.

Taking a pack train loaded with forty days rations, twenty cavalry troops and his scouts, Rucker headed south towards the San Bernardino Ranch on the border east of today’s Douglas and into Sonora where he met Mexican soldiers who were following a fresh trail that led north into New Mexico. The Mexican officer ignored the fact Rucker had crossed the border. Mexican and Americans, civil and military often cooperated, ignoring the policies between Mexico and Washington. This was true again in the early 1900s when the Arizona Rangers and Colonel Emilio Kosterltzky’s Mexican Rurales worked together to curb banditry on both sides of the border.

A few days later, near Lordsburg, they picked up the trail of the notorious Apache, Juh. The hostile’s that had just looted a wagon train. They continued the pursuit back into Mexico and on December 18th, attacked the camp, pouring devastating fire down on the warriors. The Apache resisted ferociously then adroitly slipped away but Rucker’s men confiscated all their possessions.

With winter coming on it was another devastating loss for the renegades. For the second time in a year Rucker and his scouts had destroyed an Apache stronghold. For years the Apache had considered the area to be a safe and secure hideaway.

In the summer of 1878 Rucker and his scouts were stationed at Camp Supply in the Chiricahua Mountains when a monsoon storm hit the area. Rucker, Lt. Austin Henely and Apache scout, John Rope decided to wait out the storm. After it passed they decided to cross White River Canyon and return to Camp Supply. As frequently happens in those summer storms the river had become a raging torrent. During the crossing it was better to ride single file but for some reason their horses were swimming side-by-side. The swift current caused one horse to collide, knocking both men into the water and carrying them downstream.

Several hours later Rope and the packers were able to recover their bodies. Rucker and Henely were carried to Fort Bowie, fifty miles north and buried.

On April 29th, 1879 Camp Supply was re-named Camp Rucker and then later changed to Fort Rucker. For several years after the Apache Wars ended old Fort Rucker was a cattle ranch. In 1919 Charlie and Mary Rak purchased the 22,000-acre ranch.

A couple of years earlier Mary Kidder, a graduate of Stanford University, had fallen in love and married a cowboy named Charlie Rak and during the 1930s she would write two best-selling books about ranch life and working cattle at old Fort Rucker.

Today it’s part of the Douglas Ranger District of the Coronado National Forest. Rucker Canyon and Rucker Lake are popular Forest Service campgrounds in the beautiful Chiricahua Mountains, one of Arizona’s best-kept secrets.