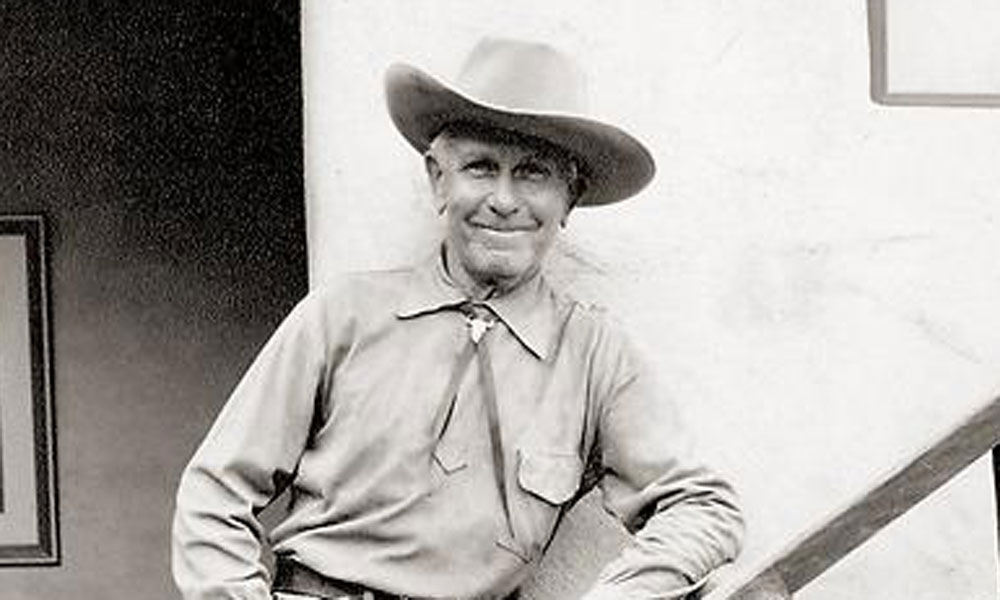 Lon Megargee is often characterized as Arizona’s original cowboy artist.  He was born in 1883 just about the time Buffalo Bill Cody was transforming the lowly, open range cowboy into a more lofty role of swashbuckling hero. It was also the golden age of yarn spinning and verbal hoaxing that became known as the tall tale. Megargee’s own life is a classic western tale of re-invention and whoppers.

During his checkered and fabricated life Megargee would claim to be a lot of things, many of them fabrications but one thing can’t be denied, he was Arizona’s first great artist.

Details of his life remain elusive due to the fact that for various reasons he tended to re-invent himself. And, he never let the truth get in the way of a good story. Although born in Philadelphia, he once claimed Tombstone as his birthplace. He said his father was the only son of a wealthy Irish widow whom while on a trip to Cuba met and married his mother, a beautiful sixteen year-old Cuban girl.  His father died in Cuba in what was described as a “love fracas.” Lon himself abandoned opulent life in an upper class to go west and become a cowboy.

None of it was true.

He also claimed to be a self-made painter but in reality he studied at the prestigious Pennsylvania Academy of Fine Arts and the Los Angeles School or Art and Design.

Lon was born Philadelphia and like many eastern kids living in crowded eastern cities, he devoured the popular shoot-em-up pulp westerns. After attending Buffalo Bill’s Wild West Show, he became hell-bent on living the life of his hard-riding heroes.

In 1896, at the age of thirteen he hopped a freight train bound for Phoenix. Once there, he worked at various odd jobs including milking cows and mending fences. Other jobs included fireman, policeman, and stud poker dealer.  But Lon wanted to be a cowboy, and he realized his dream when he took a job punching cows and bustin’ broncos at a ranch near Wickenburg.

He also got into the show business side of the trade as an exhibition roper with “Arizona Charlie’s Wild West Show.”

He learned firsthand what it was to be a real cowboy when, during the next few years, he worked on a number of Arizona cow ranches and “won his spurs” as a cowhand.  In 1926 he was foreman of a ranch north of Phoenix but went broke running his own outfit during a drought . Later he said it was a lucky break because it got him out of ranching and into cowboy art.

Lon had proven himself as a cowboy. He was an accomplished artist. He designed and built adobe homes. Most men would have been satisfied with such accomplishments but that was never enough for Lon.  His insatiable lust to enlarge his self-image drove him spin a web of misinformation.

His first taste of fame came when Governor George W. P. Hunt commissioned him to decorate the state capitol building shortly after statehood in 1912. He and the governor became friends but at times, Lon’s escapades put that friendship to the test.

Like the colorful, carefree, devil-may-care cowboys he painted, Lon liked to have a good time. He was careless and footloose with his money. Throughout much of his career Lon was broke and in debt, scheming ways to fund his artistic projects. Western writer Oren Arnold wrote, “Lon Megargee has had a good time in life, no matter where he happened to be.”

Lon was typical of the cowboy or western artists and illustrators of his time. His colorful landscapes, Native Americans and cowboys depicted more of the romantic myth of the West much the same as Hollywood’s “Oaters” and pulp western magazines. An incurable romantic himself, he painted the West the way he saw it and the way he liked it.

Despite the fact that he’d experienced the real life of the working cowboy and its hardships, Lon’s illustrations of the masculine mythic west promoted stereotypical scenes of men and horses.

Over the years he spent time in other places, including New Mexico, California and New York, but always considered Arizona his home.

Despite the fact that he’d had some formal training, Lon’s unique style was self-taught.  He had the gift of natural talent and during his career, was good enough to work as an illustrator for newspapers. He also headed the art department at Lasky-Paramount Studios in Hollywood.

Lon was ruggedly handsome and women found him irresistible. He had an artist’s eye for feminine beauty and loved painting them. They extended him favors and he acquiesced, if only for a short time. His affairs were numerous and short-lived.   Like many of his genre, Lon was a rogue and a bold deceiver, marrying at least seven times and leaving a string of broken-hearted women and angry husbands in the wake.

Lon was a complex and interesting character that people either liked or didn’t. He wasn’t gregarious, but friendly to those he liked. A swaggering persona, he enjoyed gags, jokes, and sharing a bottle with friends. He was always fun to be around and there was never a dull moment. Arizona Republic columnist wrote “Lon Megargee has had a good time in life, no matter where he happened to be.”

Like many artists, his disheveled personal life was Bohemian, yet he was a rugged, self-made cowboy from his boot heels to the top of his hat. Unlike many of his genre, Lon didn’t just paint western life, he lived it. Author Eve Ball wrote, “Lon Megargee was exactly what an Easterner thought a Westerner should be.”

Every great artist desires to leave something behind that will grant him and his works immortality. Megargee’s is, “The Last Drop From His Stetson.” This American icon is forever identified with Stetson hats and the image still graces the inside liners.

His sense of humor as illustrated in “Serenade,” “Cowboy Saturday Night,” and the A-1 Pilsner posters is reminiscent of some of the works of the legendary Charles M. Russell. I’m sure the two great cowboy artists would have had much in common and would have enjoyed each other’s company.

Arizona’s small art community and limited cultural institutions in those days made it difficult for an artist to make a living. Despite some financial success and artistic recognition Lon was always on the verge of being, in his own words, “broke flat as a horseshoe.”

Lon Megargee was Arizona’s first cowboy artist.  He was a free spirit and certainly had his faults, but we are very forgiving and understanding when it comes to creative souls who inspire us with their talent. He deserves to be placed up there alongside the great western artists.

In 2002 Marshall Trimble played Lon Megargee in a melodrama to raise funds for the restoration of some of his works at the Arizona State Capitol.
For further reading: The Cowboy’s Dream: The Mythic Life and Art of Lon Megargee. By Betsy Fahlman