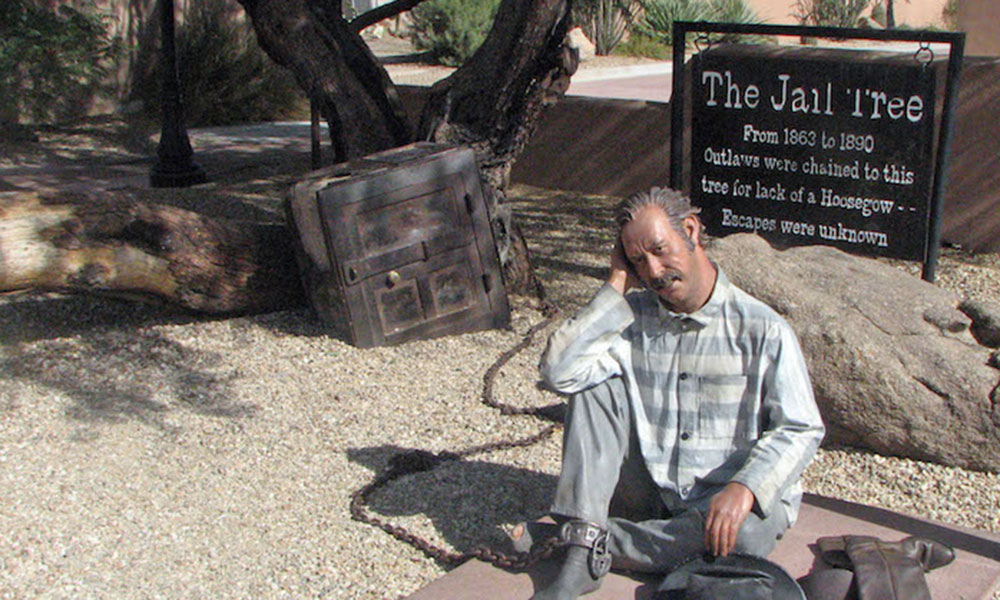 We always see on Hollywood westerns, the jails in towns like Tombstone, Dodge City are portrayed with large windows with bars to prevent escape. But did they really have large windows?  What is to prevent someone from walking up and tossing a pistol in to the prisoner?

Most jails were very crude. The cliché of the jail bars, with the big window is quite unrealistic. Most jail windows had corrugated steel, crossways, so that it let only a fraction of light in. In the early days of the west, prisoners were tied to trees with chains. The old Wickenburg Jail Tree still exists. Some sheriffs even resorted to tying prisoners to telegraph poles. In Lincoln, New Mexico, Billy the Kid and some of his outlaw friends were kept in a pit jail, literally a hole in the ground with wood slats across the top and a trap door that the jailer sat on. It was pitch black down in that hole.

Hollywood’s movie sets were built pretty similar. They always had a window in back because the script called for a crony to slip them a pistol or could tie a rope around a bar, take a dally around his saddle horn and yank it out.

In reality, there were as many different kinds of jails as there were towns and some were quite primitive.  Many old jails that had no outside windows.

Some jails were pretty elaborate, in 1874 the citizens of Helena Montana spent $11,000 to build a jail that would be the envy of jail keepers everywhere. It was a tall red-brick structure with six cells, an exercise hall along with kitchen and bunk house for the guards.

The venerable jail in Truckee, in California’s Sierra Nevada, built in 1875 was a sturdy strongbox of brick and steel with no windows unless you count the small air vents for each cell. It was used until 1964.

In Tombstone, in the early days of the camp, the jail was an overgrown, wooden box with two by fours stacked up to create a tight crib with a tiny slit for a window, which had bars like we see in the movies, but the opening was so small and narrow, no prisoner could get through it.