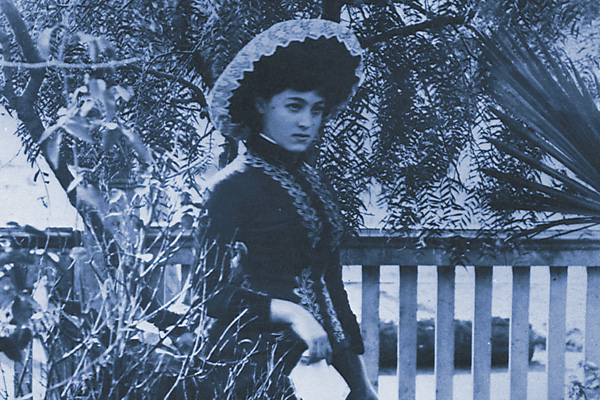 The Steamer Fontenelle slowed and drifted towards the shore at Kansas City.  Smoothly, the paddle wheel was switched into reverse and thrashed rhythmically against the Missouri River current until the boat was at the landing and secure.

Watching all this was a reporter from the Kansas City Times.  The Fontenelle had churned upriver in the spring of 1872 past Kansas City on her way to Fort Benton and the mountains.  Now three months later, the reporter noted her down-river freight: “Miscellaneous cargo of robes, furs, peltries and Nebraska corn.”

And then the correspondent noticed a woman waiting to come ashore.  He wrote, “She is a woman rather plain in appearance, skin tawny and black, eyes small, dark, expressive, a voice rather masculine.”

But this was no ordinary woman.  This was Amanda Barber.  And before long , the reporter understood just how unusual she was.  “Miss Barber, “ he explained, “created quite a sensation in the Eastern States by her marriage to a young Brule named Squatting Bear, who accompanied a party of Sioux to Washington in 1867.  That was five years ago, and Miss Barber was at that time a clerk in one of the departments in Washington in a position secured for her by General (Benjamin) Butler.

Miss Barber was caught up in what she considered the ideality and perfection of American Indians.  She told the reporter how she had read everything relating to Indian tribes, from the reports of the Commissioner of Indian Affairs down to the latest dime novelist.  The Times reporter added, “In a fit of enthusiasm or temporary insanity, she offered herself to and became the wife of Squatting Bear, a junior chief in the Lone Horn band of Brule Sioux and with him and his party returned to the Yankton agency.”

But that wasn’t enough.  The reporter wondered if she was not stricken by “a fit of fanatical romance”.  He added. “She offered herself, in 1867, as a voluntary missionary to the Brule Sioux, then occupying the territory between the Cheyenne River and the Big Horn Mountains, Dakota Territory.”

Despite her enthusiasm, Barber told the reporter that her life as “a white squaw” did not go well.  She explained that “her first great surprise was being required to mount upon a wild, vicious pony, and travel without saddle or attention over the country from the Missouri to the White Earth river, a distance of several hundred miles.”  Her inability to make the journey provoked mirth among her husbands’ companions and finally exasperated Squatting Bear until he bound her with a rope to the pony’s back and led the pony himself on the westward trail.

Mrs. Squatting Bear was also startled to find that she would share her husband with two other wives.  She described the oldest as 40, vicious, and dirty.  The youngest was 14.  Barber quickly learned that life was drudgery for the females.  She gathered wood, cooked, and scraped robes.  She noted that she was treated better when Squatting Bear was home.

In 1870, she became ill while on a buffalo hunt.  She was left at a camp where the meat from the hunt was dried.  She tried to escape to Fort Fetterman (near present- day Douglas, Wyoming), but was caught.  Her husband sold her to a Cheyenne called Coocoose or Baconsides.  He traded three horses for her.  During the spring of 1872, she showed up at Fort Benton and asked to be returned home.

The Times reporter noted, “Her romantic ideas seem to have received a terrible shock since her introduction to her new home and relations, and though she endured to fulfill her mission as a teacher and missionary to the best of her abilities, her progress appears to have been as slow as the progress of civilization on the Plains.

“She said, so far as the romance of Indian life is concerned, she found none of it.  Her efforts to teach and reform the young Indian children were treated with indifference and contempt.  She learned the Sioux language easily, but the Cheyenne dialect was harder to acquire.

“As to warfare by either the Cheyenne or Sioux, she said he Sioux caused most of the trouble.  She admitted that she twice witnessed the murder or execution of white men.  In one incident, a thirty-second U.S. Infantry soldier was captured.  He was scalped.  Two teamsters were brought from Fort McPherson.  All three men were burned at a place called Saddler’s Hill in the Nebraska Bad Land.”

The reporter concluded, “Miss Barber has a poor opinion of Grant’s Quaker policy, which she says is a perfect farce, and is so regarded by the Indians.  She asserts that there will be no peace while white men intrude into the buffalo range, or tempt the cupidity of the Indians by bringing stock and valuables out into exposed frontier settlements.  The Indians have the greatest contempt for the white man’s judgment and the efficiency of the soldiers.”

Miss Barber retuned to Milford, Massachusetts, to visit friends and perhaps lived happily ever after.