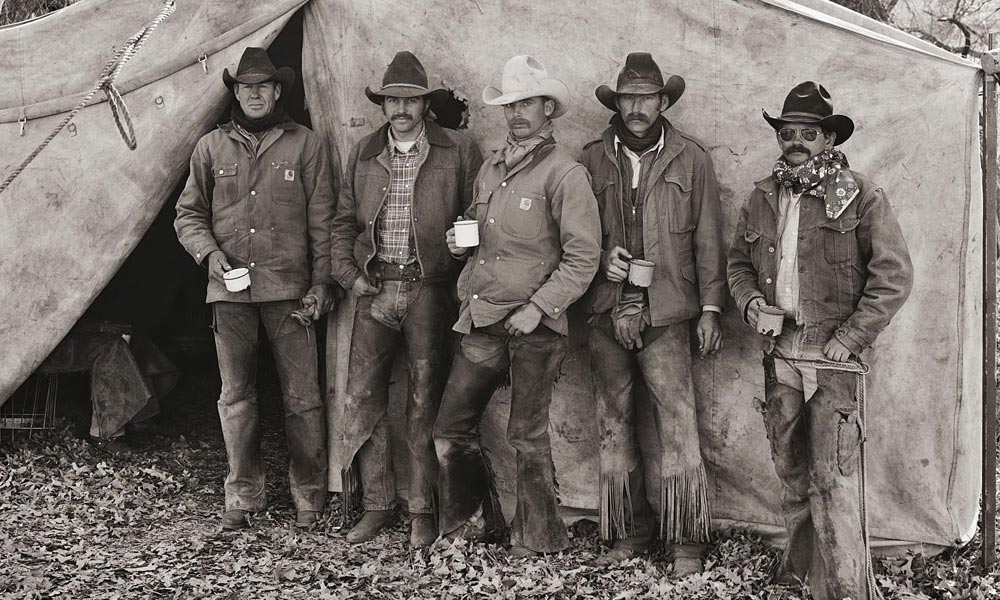 Bob Sharp, who managed the 257,000-acre Baca Float from 1937 to 1952 wrote in his Big Outfit: Ranching on the Baca Float, “The Baca Float was one of the last big outfits to run under the code of the old time ranchers, a code which respected the knowledge of the men on the payroll.  When I first took over the ranch in 1937, most of the men had cowboyed all their lives.  They were experienced in handling cattle, loyal, and had an unconscious love of nature and freedom of action.”

The Baca Float, better-known by its O RO brand is located in northern Arizona about 35 miles south of Seligman.  The cattle are branded O RO and the horses RO. Cowboy’s usually refer to the outfit as the “RO’s.”

I grew up in Yavapai County, not far from the ranch.

Twentieth century cowboys throughout the West consider it the top ranch of its size. In the early years is was truly a “horseback ranch” in that all the work was done from the back of a horse.  All the supplies had to be hauled in by freight wagon and pack mules.  Its mule-drawn chuck wagon was one of the last in Arizona.

Lack of permanent water supplies had kept the grass lands pristine.  The new owners using dirt scrapers dug out 15-foot deep catch tanks in strategic areas to hold water year around.  Soon the ranch was running 2,500 head of cattle to graze the virgin grass lands.
The ranch employed one cowboy at each line camp and it was his responsibility to keep an eye on 50,000 acres.  He rode from daylight to late afternoon, seven days a week, “keeping an eye on the cows.”  He’d bring out salt for the cattle, brand mavericks, doctor cattle, ride fence, and “look out for anything, good or bad.”  It was a dangerous, lonely existence but it had its rewards; the cowboy was his own boss, he had plenty of fresh air to breath and lots of space to roam.

The Baca Float acquired its unusual name as a result of a lawsuit filed by the heirs of Don Luis Maria Baca in northern New Mexico.  It was one of five 100,000-acre grants authorized by Congress in 1860 to Baca’s heirs as compensation for the 500,000-acre Las Vegas Grant.

In 1821, Baca petitioned the Spanish government for a grant known as the Las Vegas Grande some 60 miles northeast of Santa Fe.  In the ensuing years Baca and his son were killed and the family abandoned the ranch.  Years later others came, claimed the land and founded the town of Las Vegas.  The Baca heirs protested and since both claims seemed valid Congress was in a dilemma.  It was easier to let the heirs select other lands in the New Mexico Territory (Arizona didn’t become a separate territory until 1863) than try to evict the 2,200 residents of Las Vegas.  The result was five 100,000 rectangular tracts of non-mineral land called “floats.”  As a result of changes in boundary lines with Arizona and Colorado, two grants are in present-day Arizona and two in Colorado.

The Baca Float ranch was sold numerous times, mostly for nonpayment of taxes until Greene’s Cananea Cattle Company bought it in 1936.

The man behind the Cananea Cattle Company was a flamboyant wheeler-dealer named William C. Greene.  He came to Arizona in 1877, prospecting for gold.  He eventually married a widow and owned a ranch in Cochise County. In the early 1903 he bought a ranch in the beautiful San Rafael Valley that straddled both sides of the Mexican border.

One of Arizona’s most colorful characters, he was a high stakes gambler who dreamed big.  While still in his twenties he audaciously build up a multi-million dollar legacy.  During the late 1890’s he went prospecting near Cananea, Mexico and acquired an option of the rich Cobre Grande copper mine.  He then went to New York, and with typical flamboyance, acquired sufficient capital to begin mining operations.  Several years later he liquidated his mining operations for some six million dollars and devoted the rest of his life to cattle ranching.

Colonel Greene loved horses and at one time ran some 3,000 quarter horses with some of the finest bloodlines in the country.

By the time he died in 1911 Greene was an Arizona cattle king.  He left his holdings to his wife, who later married the company manager, Charles Wistwall.

In 1958 the Mexican government seized the vast Greene ranch in Sonora but the Greene Cattle Company retained their outfit in the San Rafael Valley of Arizona. The old ranch house was used in the 1963 John Wayne film McClintock.

The Greene family controlled the Baca Float #5 in Yavapai County from 1937 to 1973. Greene’s youngest son, Charlie, took over management in 1958 until 1973 when the Greene’s sold out to the JJJ Corporation, headed by John Irwin II, descendent of territorial governor, John Irwin. Today, his son John III and daughter Jane Irwin Droppa own the ranch. Wayne Word is manager. The outfit is roughly a quarter-million acres runs about 50,000 head of cattle and fifty broodmares.

Neither the land nor the remote O RO have changed much in the past century and a quarter. It’s still some of the roughest, untamed land in the Southwest with elevations running from 4,000 to 7,500 feet. The ranch is divided up into five year-around cow camps.

The vast, sprawling, pristine rangeland with its mountains and hills, stands of magnificent pine, fir, oak, juniper, mountain mahogany is best-described as “High. Wide and Handsome.”