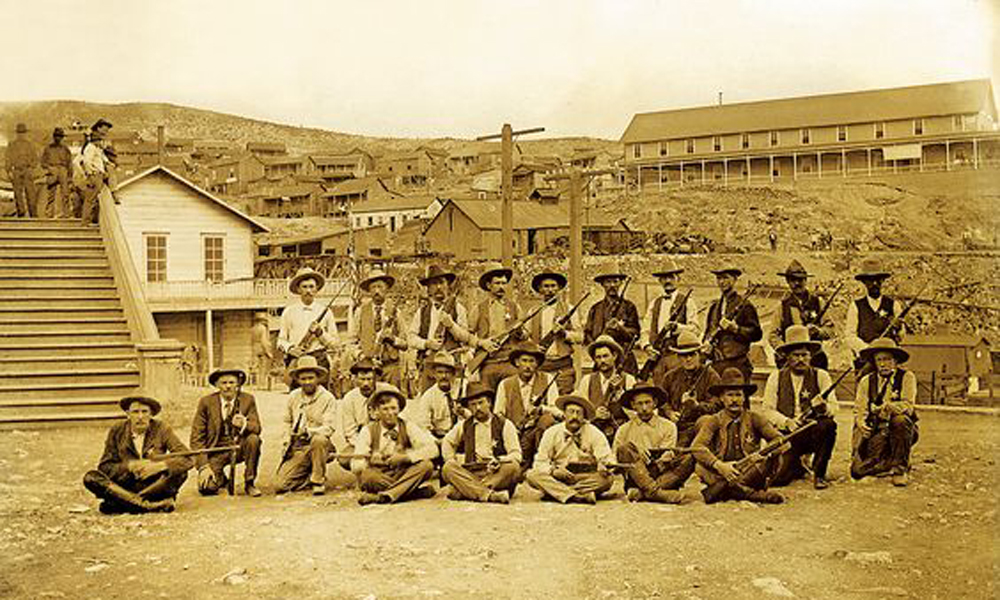 During the years following the creation of the Arizona Territory in 1863 and the gold discoveries the clashes between the Indians and the whites increased. Most of the violence took place along Lynx Creek, the Hassayampa, Verde, Gila and Salt Rivers and their tributaries.  During those years the whites lived on the reservations and the Indians occupied the land but the times they were a-changing.

A bill was introduced in the territorial legislature to raise a force of one hundred rangers. The captains would receive five dollars a day and the privates three. The issue was money; the cost was prohibitive, $150,000 annually while the total tax collection amounted to only fourteen hundred. The bill was defeated by just one vote.

By 1865 the Civil War was over and the California Volunteers who’d been occupying the territory were heading home so five companies of rangers were raised to replace the departing soldiers.

Mexicans and tribes like the Pima Indians made up these Arizona Volunteers who were recruited in Tucson and settlements along Hassayampa and Gila River. They were led by veteran Indian fighters like Lieutenant’s Manuel Gallegos, of Tucson, a former captain in the Mexican Army and Primativo Cervantes of Wickenburg.

Companies B and C were made up of Maricopa and Pima respectively. Company C was led by Lieutenant John Walker, a half-Wyandotte Indian from Illinois who’d settled among the Pima. His battle dress was a breech-clout and he could scream war horrific war cries with the best of them. He was also merciless in battle against their hated enemies, the Apache.

Oscar Hutton, a respected Army scout, was another leader of the volunteers. He was said to be overly sensitive about having six toes on each foot but otherwise he was “a good and brave man.” He died in the 1870s after a mule kicked him in the head.  Noting he was an experienced mule skinner, Captain John Bourke opined wrote that Oscar died “quite as much from chagrin at being outwitted as from the injury inflicted.”

Company E, led by Gallegos rode out of Camp Lincoln, so-named before it became Fort Verde, on February 11th, 1866 in search of Tonto Apache bands and two nights later surprised a group holed up in some caves.  When the battle ended some thirty warriors had been killed and a dozen women and children were taken prisoner.

Soon after Company A under Lt. Cervantes fought a successful battle killing some twenty-two Apache.

Then on March 31st John Walker led his Company C Pima warriors in a fight that killed twenty-five Apache while losing only one killed and two wounded.

On another occasion, while escorting a wagon train near Prescott, Company E’s Sergeant Elias and six men took on a band twenty-seven Apache in a two-hour fight. During the battle one of his men was captured, got away and re-captured three times. Just as Elias and his men were running out of ammunition the warriors withdrew.

The Arizona Volunteers were disbanded in the fall of 1866. Despite their success the Tonto Apache and Yavapai didn’t stop raiding.

The depredations continued and the call went out to raise another force of rangers. A public meeting in Prescott on November 23rd, 1866 approved the raising of a company of 30 men to serve a 3-month tour of duty. Tom Hodges, a local bartender and rough-hewn frontiersman was named captain.

A local theater group held a fundraising performance and raised the lofty sum of $125 to help pay expenses.

A proposal to pay $100 for every scalp failed by to pass the legislature.

The campaign trail is long, tedious and dangerous.  Enthusiasm tends to fade quickly when the one is serving without remuneration. The troubles continued and with the exception of a few punitive expeditions that were rarely successful.

There were other groups of rangers in the ensuing years. In May 1882 ex-Army Captain Bill Ross, unhappy with the ineffective actions of the Army organized the Tucson Rangers, some fifty hard-riding frontiersmen to go on the offensive. Funded by local merchants the rangers took no Apache guides and rode into Mexico where they were taken prisoner and disarmed by soldados of the Mexican Army.

They returned from the fiasco, unarmed, humiliated, weary and worn from their unauthorized raid across the border.  Forced to ride some 300 miles through Apache-infested country, the Ross had his men cut short poles and lay them across their saddle horns in a successful ruse to fool the Indians into believing they were armed.