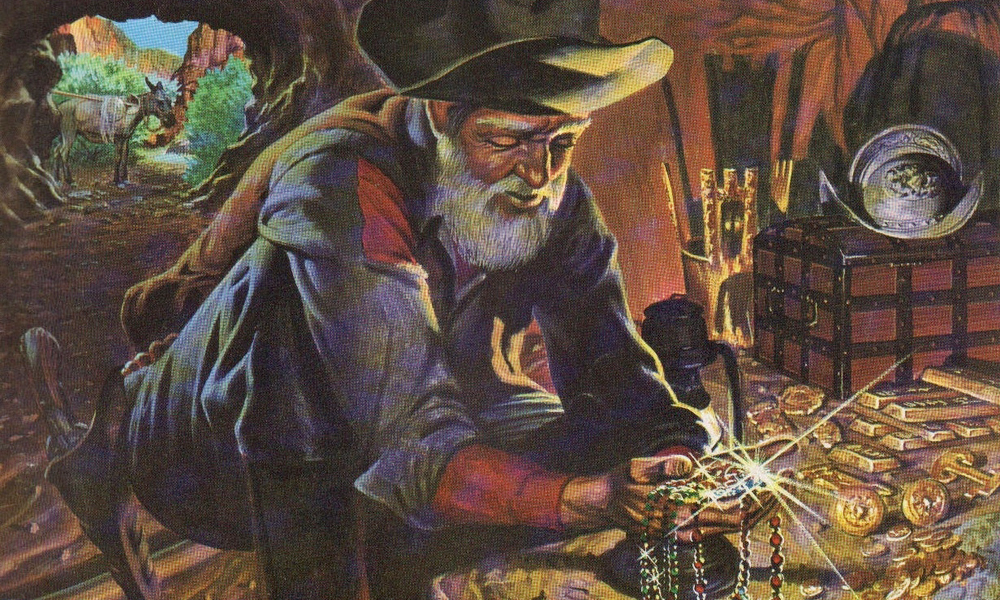 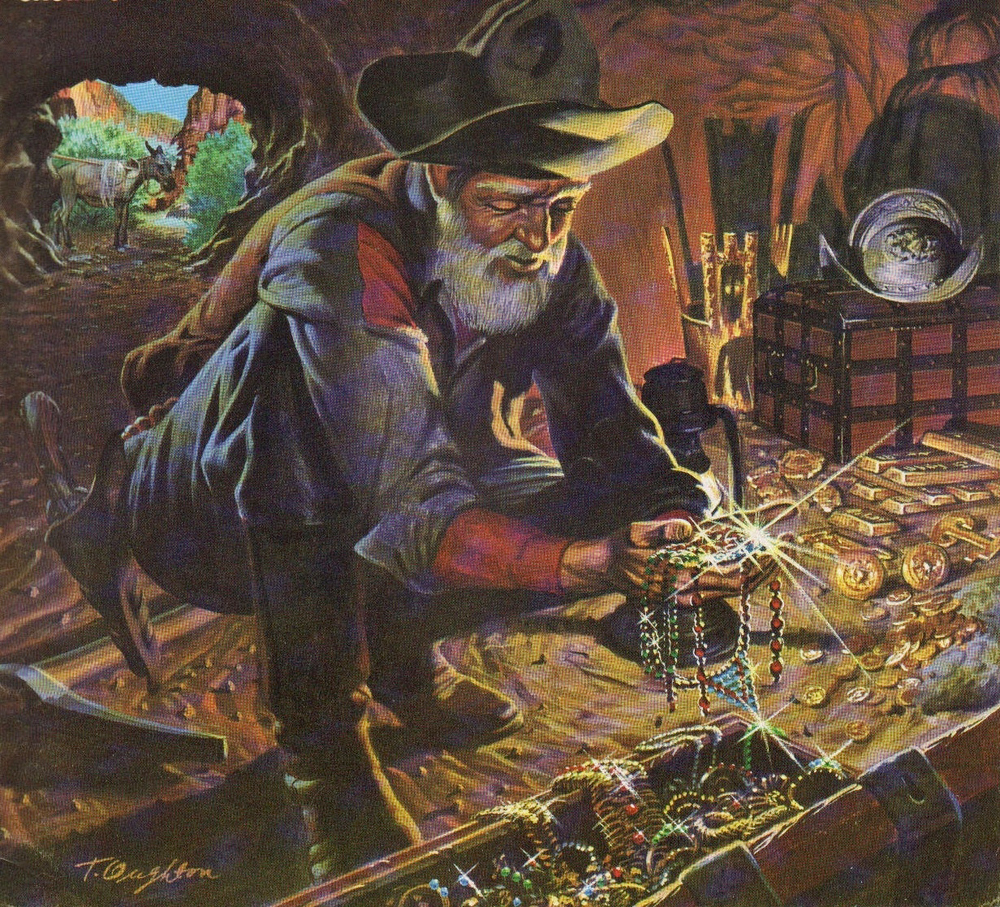 Somewhere out in these rugged mountains of eastern Arizona, just maybe lies the greatest lost mine of them all…the Lost Adams Diggings.

Because of its rugged terrain and mineral-laden mountains Arizona has long been the source of lost mine tales. The biggest of ‘em all was the Lost Adams. According to legend a sheer canyon wall with a huge boulder at the base hides a narrow opening into a Z-shaped canyon with a little stream running through it called by the Apache, Sno-ta-hay.

There lies a small valley with a stream running through it. Near the stream is a burned out cabin and beneath the floor are several buckskin sacks containing millions of dollars in gold dust.

The story begins in the mid 1860’s when a freighter named Adams joined up with a party of prospectors at Gila Bend. With them was a Mexican lad with a twisted ear who’d recently escaped from the Apache named “Gotch Ear.”

He regaled the eager prospectors with tales of Apache gold in Z-Canyon. “Nuggets as big as turkey’s eggs” he claimed.

Gotch Ear agreed to lead the miners into the heart of Apacheria where they would find riches beyond their wildest dreams.

After a long journey across Arizona’s rugged central mountains they came to Z Canyon and it was just as Gotch Ear promised. The little stream glittered with placer gold.

The men built a cabin and eagerly began panning the gold from the stream which was placed in buckskin bags and buried beneath a slab of flagstone hearth of the fireplace. Before long they had amassed some $100,000 in gold.

Then one day they found themselves surrounded by a party of Apache warriors. They weren’t unfriendly but they weren’t friendly either. Their leader told the prospectors they could remain at the site but they were not to go above the falls.

However, the lust for gold and the lure of a forbidden area proved irresistible and some of the miners decided to go above the falls and check it out. They returned with several large nuggets. One of them presented Adams with a nugget the size of a hen’s egg. Adams fiercely reprimanded him then stashed the nugget at the base of a tree stump.  Little did the trespassers know they were being watched and their fate was being determined. The entire party must die.

Supplies were beginning to low so a small party headed for Ft. Wingate to re-supply but when they didn’t return, Adams and another man went to investigate. Near the entrance to the canyon buzzards circling provided mute evidence as to the fate of their companions.

Adams and his partner rushed back to the camp just in time to witness a massacre at the hands of Apache warriors. The two men waited until nightfall then Adams crept down to retrieve the nugget at the base of the tree stump. They slipped away, vowing to return someday to claim the gold.

Adams and his companion wandered for days before they were picked up by an army patrol. They were taken to Fort Apache, dazed and delirious from their ordeal. His companion soon died and Adams headed for California. All he had to show for his efforts was a solitary gold nugget which he later sold in Tucson for sixty dollars.

Adams never forgot his vow to return to claim the gold. When the Apache wars ended he did come back, searching high and low for the steep-sided canyon with the huge boulder blocking the narrow entrance to the Z-shaped canyon.

Adams spent the rest of his life looking but not locating the valley with the stream running through it. His long quest ended with his death at the age of 93.

The lost mine that bears his name still eludes prospectors to this day.