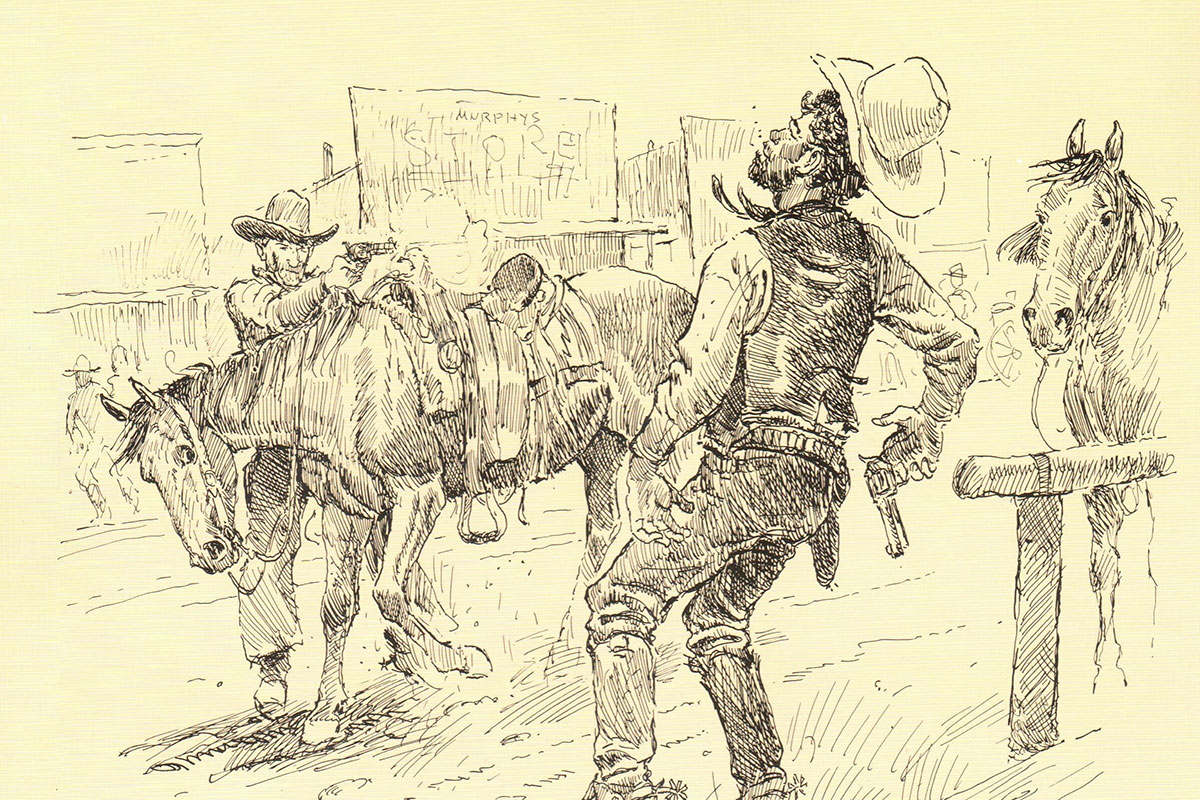 The outlaws of Cochise County during the 1880s were a reckless breed and the fact that Curly Bill was one of their leaders says something of his toughness. No known photos
of him exist but Billy Breakenridge described him as “fully six feet tall, with black curly hair, freckled face, and well built.”

Newspapers referred to him as the terror of Cochise County. One wrote, “His playful exhibition of his skill with a pistol never failed to delight those communities which the
peripatetic William favored with his presence.”

He dared local lawmen to try and arrest him and none was willing to run the risk. He hung out in Galeyville, a small community on the east side of the Chiricahua Mountains
where he was known locally as the “Outlaw King of Galeyville.”

Galeyville was a rough town that had more than its share of outlaws and hard cases. Hard men and rough humor often led to bloodshed, even among their own kind.

One time while the boys were divvying up the spoils after a robbery one of the outlaws rode by and grabbed Bill’s hat. Bill stood up, jerked his pistol and pointed it at the guy then laughed and fired off a few shots into the sky. Curly Bill was known around Arizona as an impulsive devil-may-care cowboy known to go on a tear at the drop of a hat.

On the evening of October 27, 1880, Bill and some friends were drunk on the streets of Tombstone firing their pistols into the air. Town Marshal Fred White attempted to arrest Bill and told him to hand over his pistol. Bill pulled the weapon from his holster and White grabbed the barrel. The gun went off fatally wounding the marshal. Did Curly Bill perform what became known as the “Curly Bill Spin” to murder White or was it an accident?

Wyatt Earp was standing nearby when it happened. He whacked Bill up beside the head with the barrel of his pistol knocking him senseless. Bill was then arrested and hauled off to Jail. Fearing a mob would lynch him Wyatt took him to Tucson.

Following the killing of Tombstone Marshal Fred White, Bill spent some time in a Tucson jail before being acquitted by a jury packed with his cowboy pals. During his trial Judge Joe Neugass called the killing “homicide by misadventure.” He was released from jail on
December 27th.

Fresh out of jail, Bill went on a rampage, treeing the towns and tormented the citizens of Charleston, Contention City and Watervale along the San Pedro River.

On January 8, 1881, Bill and another cowboy invited themselves to a Mexican fandango. One blocked the front door while the other took the back. They pulled their pistols, yelled for the music to stop and ordered everyone to strip naked. Then he ordered the band to strike up the music and the dancers to dance for their amusement.

The following day the two cowboys went into a church at Contention and interrupted the sermon by telling the reverend to quit preaching or he’d shoot his eye out. Then
warning him to stand perfectly still, the boys took turns shooting close to his head. They then aimed their pistols at his feet and made him dance a jig.

The boys then headed for Tombstone where they got good and drunk then rode down Allen Street “shooting holes in the sky.”

Nine days later they rode into Contention City, robbed a til of $50 and fired off a round at a citizen. After spending a day terrorizing the locals they rode on to nearby Watervale. From there he dared authorities to “come and get me.” Bill’s shenanigans drew national publicity and made him the most famous outlaw in wild and wooly Arizona.

In Silver City he burned down a saloon after he shot out a lamp and it exploded.  Another time he shot a hole in a freighter’s hat for his own amusement. He also shot a hole in the hat belonging to a reporter who wrote a story the gunman didn’t appreciate.

One time in Galeyville a saloonkeeper was getting ready to take a drink from a tin cup when Curly Bill shot it out of his hand. Unfortunately the bullet went through the wooden wall and killed his own horse.

Another time in Galeyville he went into a restaurant, ordered a meal, then placed a six-shooter on each side of his plate and ordered everyone to wait until he was through
eating before they could leave. When he finished Curly Bill laid his head down upon his arms and fell asleep. Everyone was afraid to move. Sometime later he awoke, paid for
everyone’s meal and left.

Later, the outlaw chief assisted deputy Breakenridge collect taxes, taking him into the lair of the cattle thieves.

Another time, at Fort Bowie, he asked a soldier to hold up a coin. Bill drew his pistol and commenced to fire, knocking the coin from between the soldier’s fingers. Bill decided to try again but this time he shot off the soldier’s thumb. Bill’s response to that was: “Looks like I’ve just gotten you a discharge from the Army.”

You would think Bill’s outrageous antic would one day backfire. It did on May 19, 1881, when he got into a barroom altercation with a cowboy named Jim Wallace.

Wallace left and hung around outside and when Curly Bill stepped out of the saloon, he came up from behind and fired his six-gun, striking Bill in the cheek. The bullet went through and came out the other side of his mouth, taking some teeth.

It looked for a while like the outlaw king was going to die and his friends made plans to string up Wallace. But Curly Bill had a strong constitution and he managed to survive, although he did have to spend the next few weeks with an awkward bandage wrapped around his head.

A San Simon cowboy named Dick Lloyd was well-known around southern Arizona for his ability to ride a bronc in high style and liked to get drunk and show off his riding skills.

Unfortunately he picked the wrong night to tie one in the little burg of Maxey and rode his horse into the local saloon where Johnny Ringo, Curly Bill and some of the boys were playing poker.

They didn’t appreciate Lloyd’s little rodeo interrupting their little game so they jerked their pistols and plugged him then calmly resumed their poker game. Afterwards, as they
were leaving they generously tossed a portion of their winnings onto the body to defray funeral expenses.

One can say a lot of bad things about Curly Bill but nobody could say he was boring.