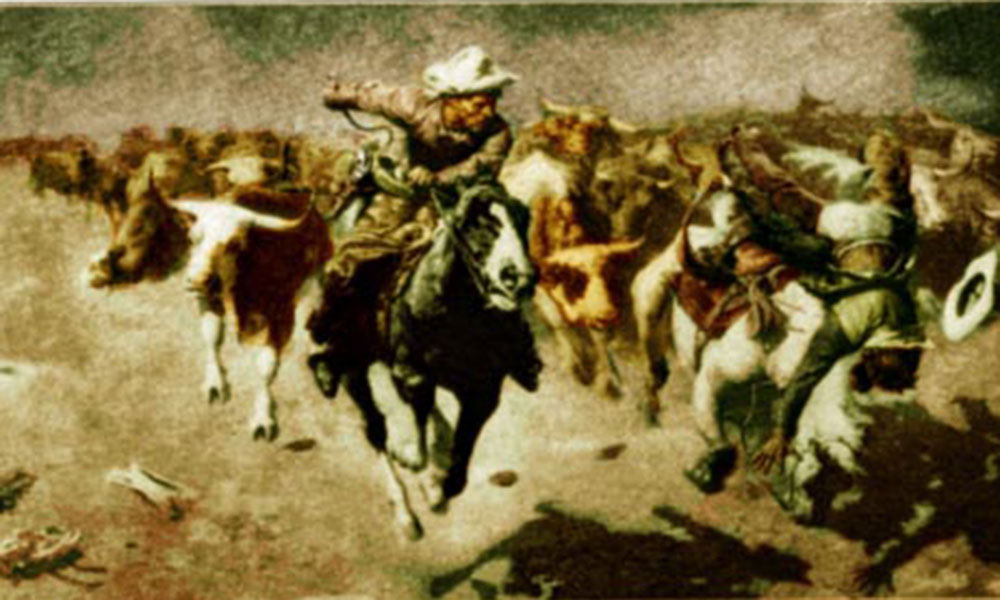 Although there were cattle drives prior to the Civil War their heyday came in the years that followed. The war had pretty much depleted the beef supply in the East and when the Texans returned home in 1865 they found thousands of longhorns running free. A way needed to be found to bring the two together. At the same time the Kansas and Pacific Railroad was building west towards Abilene.

Joe McCoy had been in the horse and mule business but he realized a lot of money could be made in the cattle business. He convinced the Texans to gather herds and drive them to Abilene where they could be shipped by rail to the meat packing companies in Kansas City and Chicago. He told the skeptical Texas ranchers that if they got their herds to the railhead he would be there to meet them and pay off in gold.

They took him at his word and in 1867 when the first herds arrived McCoy was there to keep his promise. There’s an old story that claims that’s where the saying, “Real McCoy,” was born.

The cowboy legend was also born from those early Long Drives from Texas to Kansas and later all the way to Ogallala, Nebraska and Montana. Young men left home in the east to fulfill that once in a lifetime experience; to make the Long Drive and earn the title, drover, cowhand or cowboy. An eastern boy might make the drive only once before going home to help his father run family business but if he lived to be ninety years old he still considered that cattle drive from Texas north to be the highlight of his life.

The drive began generally in southwest Texas south of San Antonio in the brasada or brush country along the Nueces River.

After the herds were gathered they were “pointed north” to Kansas. Cattle drives were mostly about bringing beeves worth about $4 a head from the home range and taking them to a point of sale where they might bring $40 a head.

The trail from various parts of south Texas to Kansas was about 600 miles and encountering no problems could be covered in 3-4 weeks but six weeks was most common considering all the hazards along the way.

The cattle drives began heading north from Texas in the early spring as the grass “showed green” The earliest drives would reach the rails in Kansas in early June and continue until September.

The first large drive north from Texas occurred in 1866 when several Texas ranchers banded together and drove some 200,000 head north to the nearest railhead at Sedalia, Missouri. However, farmers threatened to shoot any cows crossing their lands forcing some of the drovers to have to sell their cattle before reaching the railhead.

The following year the Long Drive went up the Chisholm Trail to Abilene with only about 35,000 head.

The number of cows grew considerably from 1867 each until the peak year in 1871 when 600,000 cows went up the trail. Nearly three million cows were shipped out of Abilene before quarantines pushed the trail west to Dodge City in 1876 creating what became known as the Great Western Trail. Farmers arriving in Kansas kept pushing the drovers further west. The Goodnight-Loving was the fourth of the great Texas cattle trails and opened up New Mexico and Colorado to the Texas drovers.
In 1875 there was a depression and a market glut as only 151,618 cows came up from Texas but the next year it more than doubled to 321,998. In 1880 there were 394,784 Texas cows going up the trail and a year later it backed off 250,000.

Over the first two or three days of the drive a natural leader would emerge from the rest of the herd and some became famous. Charlie Goodnight’s “Old Blue” became a legend. He was tall, lanky and the color of gun-metal-blue. He had a calming effect on the skittish longhorns and was like having an extra hand along. The amazing trait about Blue is he refused to partake when the cattle stampeded. He’d wait until they settled down then take his place in the lead.

Old Blue was too valuable to ship to market so he would walk back to Texas and hang out at the ranch until it was time to point ‘em north again. Old Blue made the drive up the trail eight times, leading some 10,000 head to market.

Cattle were pushed hard, as much as 25-30 miles a day the first few days then when the home range was far behind, the drovers eased up to 10 miles a day or less, depending on the grass and water supply. So the cows wouldn’t lose too much weight on the trail they were allowed to graze along the way. Around noon they took a break then pushed the herd along until sundown.

There are varying opinions on how many cowboys it took to drive a herd but usually one of any size required a crew of 10 to 15 men. The trail boss usually rode point seeking water or mapping the route. The cook was up front too. Behind them were two lead riders, followed by two flankers. Off to the side was the horse wrangler. Bringing up the rear were the drag riders, the “dust eatin’ cowboys. The worst cowhands or the new guys usually got that job.

Herefords were introduced to Texas in 1876 and in the next few years replaced the legendary longhorns as the major range breed.Bose Ikard was born into slavery in Mississippi but when the Ikard’s moved to Texas he became a cowhand, eventually working for Goodnight. After delivering the herd to Abilene Goodnight was paid off with thousands of dollars in gold.

Bose became the de facto banker for the outfit carrying the gold. Goodnight figured no outlaw would suspect a black man would be entrusted the gold.

In the fictional classic, “Lonesome Dove,” Bose Ikard was the prototype for Josh Deets, as were Woodroe Call and Gus McCrae for Charlie Goodnight and Oliver Loving.

Like this article? Try: Buck Taylor: The Original King of the Cowboys