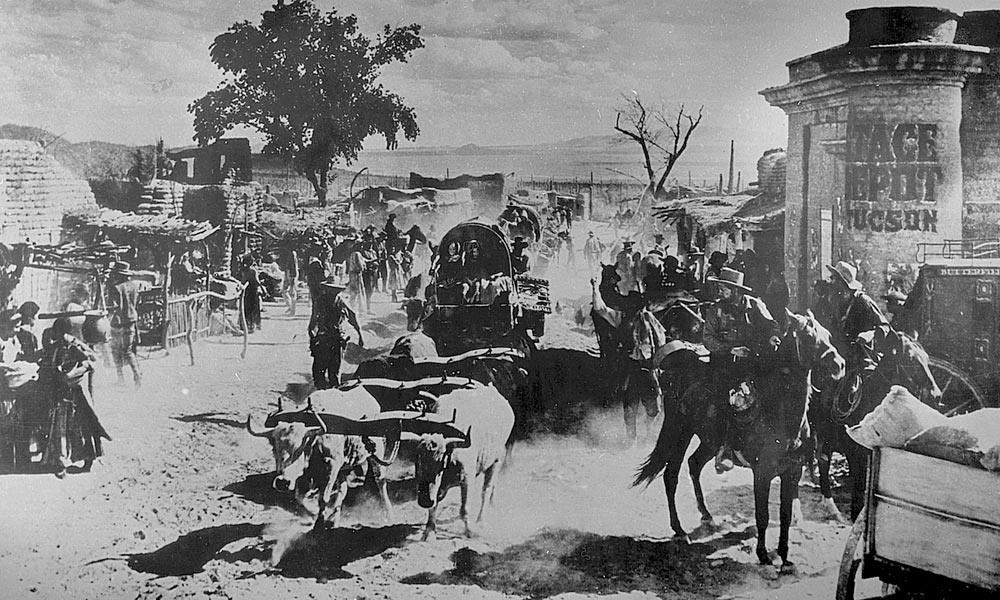 Theaters were a popular form of entertainment in early Arizona and the first moving pictures came to the towns in the 1890’s. They were shown wherever a paying crowd could be gathered.  After Charles M. Clark, of Jerome won a film projector from a traveling salesman in a card game, he took it, along with some films to towns like Ash Fork, Williams, and Flagstaff where he held one-night stands. The favorite film was a prize fight featuring Gentleman Jim Corbett.  The fight only lasted a few rounds so to make the show run longer Clark ran the film on the reverse side.  During a showing at Fort Apache one soldier was heard to remark, “Look at Corbett work his right jab,” when it was actually his left.

A cowboy rode into Flagstaff bent on seeing his first motion picture.  Sitting in the dark theater he watched wide-eyed as the film open with with several pretty young women at a country swimming hole getting ready to go skinny-dipping.  His interest piqued as they began to disrobe but just as they got down to their underwear a freight train passed by blocking the view. When the train passed the ladies were standing in water clear up to their pretty necks. The cowboy hurried up to the ticket office and bought five more tickets.  When the employee advised him the same movie would be showing over and over he said, “That’s okay with me.  I don’t know anything about these new moving pictures, but I do know something about trains.  Sooner or later one’s going to be late, and I aim to be there when it happens.”

Legend has it the film business in Arizona began in 1911 when Jesse Lasky and Cecil B. DeMille decided to move their film company from New York to Flagstaff, Arizona to take advantage of the wide open spaces to produce the popular westerns.  They arrived in a raging snowstorm and decided to keep moving west until they reached the sunny Pacific coast where established the film industry in Hollywood. DeMille later denied the story but as Mark Twain said “if it didn’t happen that way it could have.”

Tucson was the setting for several early “Cisco Kid” silent one-reelers.  They starred Herbert Stanley Dunn, who became the first film cowboy to use two six-guns.  Later, during the 1930s Warner Baxter filmed a number of Cisco Kid “talkies” near Tucson.

Arizona’s most famous movie set, “Old Tucson,” was built in 1939 for the film, “Arizona,” starring William Holden and Jean Arthur.

Tom Mix, the greatest cowboy star of the silent westerns, made many of his movies in the Prescott and Grand Canyon areas.  Mix, a great showman and stuntman, got his show biz start in Prescott where he was the national rodeo champion in 1909.

Beautiful Monument Valley with its colorful buttes, spires and mesas became the setting for many westerns beginning in 1939 when John Ford filmed “Stagecoach,” starring John Wayne.  During the next twenty or so years Navajo Indians found steady employment playing Comanche, Cheyenne, and Apache warriors in such classic films as “She Wore A Yellow Ribbon, “Fort Apache,” “Rio Grande,” “The Searchers,” and “Cheyenne Autumn.” They always spoke Navajo no matter which tribe they were playing. Since the censors in Hollywood didn’t understand their language they had plenty of fun using dialogue that would have made a truck driver blush.

During the heyday of western movies many were filmed in Sedona’s beautiful Red Rock Country where sixty feature films were eventually shot.

These were the days before freeways made picturesque Sedona a major tourist destination and the awesome buttes, spires and monuments like Bell Rock, Coffee Pot and Red Rock Crossing rolled across the big screen showcasing the remote area to the world. Millions became familiar with the Red Rock Country and its massive sandstone monoliths, carved and sculpted by the wind, sand and time into natural cathedrals turning the quiet town of Sedona into a tourist Mecca.

Elvis Presley filmed “Charro” at  Apacheland, a movie set in the Superstition Mountains. Death Valley Days, hosted by Ronald Reagan was also filmed at Apacheland. It was also the setting for television westerns like Wyatt Earp, starring Hugh O’Brian, Wanted Dead or Alive with Steve McQueen, The Virginian with James Drury, Have Gun Will Travel with Richard Boone, and Rawhide with Clint Eastwood.

Scenery had much to do with motion pictures made from books, plays and other settings.  Texans were chagrined when the movie, “Duel in the Sun,” a giant epic western with as Texas setting was filmed in Arizona in 1946.  It happened again two years later when “Red River” was filmed in Cochise County with the San Pedro River as the legendary river that borders Texas and Oklahoma.

In 1955 Hollywood opted to shoot Rogers and Hammerstein’s Broadway hit, “Oklahoma” in Arizona’s San Rafael Valley.  The cast and crew were staying in Nogales and in order to sooth the ruffled feathers of the Oklahomans, the good citizens of Nogales generously allowed the state of Oklahoma to “adopt” their community until the filming was completed. So, for a brief time Nogales, Arizona became Nogales, Oklahoma.

Incidentally, corn doesn’t grow “high as an elephant’s eye” in the San Rafael Valley so the University of Arizona Experimental Farm came to the rescue and pumped enough steroids into the corn crop to produce the desired results.  Also, an entire peach orchard had to be flown in from California.  The fuzzy peaches were made of wax and had to be constantly replaced because they kept melting in the hot Arizona sun.