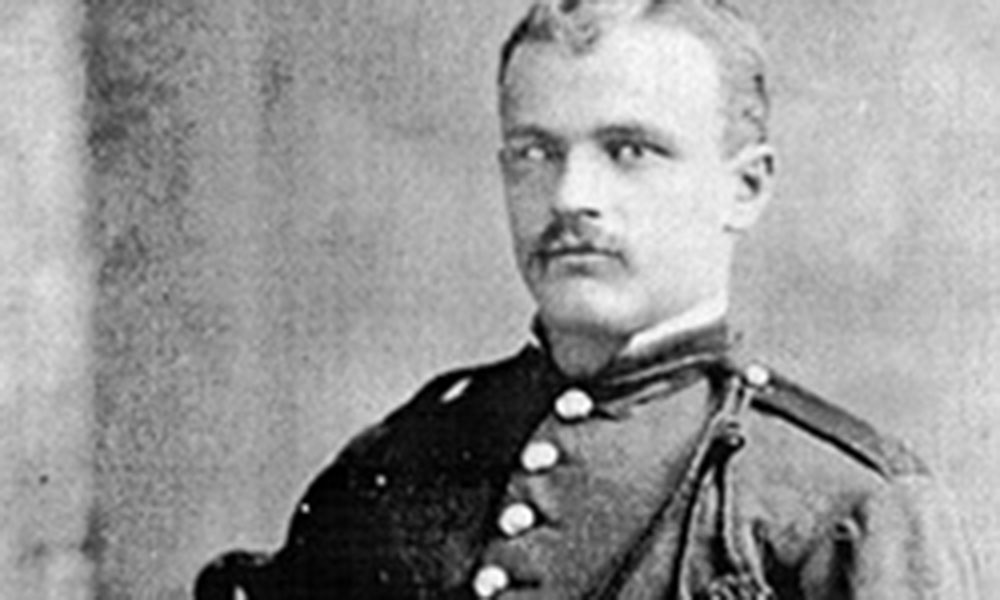 Will C. Barnes was born in San Francisco on June 21st, 1858.  After moving across country and living in numerous states, he settled in Washington, D.C.  Although he stood only five feet four inches tall, Barnes was smart, able-bodied and anxious for adventure.  On July 1st, 1879, he joined the U.S. Army and was assigned to the Signal Corps as a private.

In early 1880, Private Barnes was assigned to Fort Apache, a remote military post in the rugged mountains in the eastern part of the Arizona Territory.  The garrison of two hundred men was made up of two companies of the 6th Cavalry, two of the 12th Infantry and one company of Apache Indian Scouts.

While traveling by pack mules from Camp Thomas to Fort Apache, Barnes recorded in his journal his first encounter with the Indians. “. . . we were startled by half a dozen rifle shots fired in quick succession . . . they all passed over us.  As our party was small and we had a big pack train to protect we immediately made for the center of the flat where we could at least be safe from ambush.  The shots were undoubtedly fired by hostiles, but they did not care to follow us out into the open country.”

The Signal Corps had developed a military network that consisted of more than 5,000 miles of telegraph lines in the western territories. As the telegrapher at Fort Apache, the now Private First Class Barnes was free of the usual military duties common to enlisted men.

Because his Army training at Fort Whipple in Washington, D.C. had been in military signaling and the rudiments of meteorology, he had the dual responsibility of post telegrapher and weather observer.

His daily activities consisted of using the electric telegraph to dispatch administrative messages, collect meteorological data for headquarters in Washington while servicing and repairing his equipment and pole lines.

In his job servicing and repairing telegraph poles, Barnes described the rigors of the job.  “The poles were mostly cottonwood saplings, wired to cedar stubs set in the ground.  One pole in fifty, perhaps, could be called straight.  The rest were as crooked as a ram’s horn and with trees falling across it and other accidents, the wire was down almost as many days as it was up.”

The Apaches also complicated matters, pulling out the wires and scattering them among the rocks or cutting the lines then tying the ends back together with leather, thus breaking the circuit. This also made finding the cut lines a difficult task.

In 1881, there was a surge in Indian uprisings. Almost daily, the wires were kept buzzing with messages telling of bands of Indians raiding settlements in the Arizona and New Mexico Territories.

On August 29th, Fort Apache’s commanding officer, Colonel Eugene Carr, was ordered to take his soldiers and arrest a medicine man named Nock-ay-del-klinne, “The Dreamer,” at an Apache village on Cibecue Creek. The shaman was prophesizing the return to life of great Apache leaders who would drive the whites out of Apache lands. His disciples were growing daily and the Army feared an outbreak of violence.

Defense of the fort was turned over to Major Melville Cochran and the sixty-nine remaining soldiers.  When it became apparent that the telegraph lines had been cut and an Indian attack was imminent, Major Cochran took steps to defend Fort Apache.

Garcias Severiano, a Mexican captive raised by Apaches rode into Fort Apache and reported that almost all of Colonel Carr’s force had been wiped out at Cibicue. A post trader told the same story. It looked like a siege was imminent. Communication had to be reestablished and a message needed to be sent to Fort Thomas to send reinforcements.

Newspapers around the country were reporting that Colonel Carr and his entire force had been massacred at Cibicue. It looked like a repeat of Custer and the Little Big Horn.

While Colonel Carr and his men were attempting to arrest Nock-ay-del-klinne, a battle had broken out at Cibicue and in the ensuing gunfire, the medicine man was killed. Carr’s column had suffered several casualties but they managed to escape and were making their way back to Fort Apache.

Meanwhile, Fort Apache had been completely cut off from the outside world. Barnes rode out alone to the top of a 2,000-foot mesa, recently abandoned by Apache warriors. Using his binoculars he scanned the area. Apache smoke signals could be seen on several mesas and a small band of Apache was making their way up the mesa towards him. He decided to make a stand and fight but then, he saw a dust cloud to the west, then a column of cavalrymen came into view. It was Carr’s force returning from Cibicue. They hadn’t been massacred after all.

Barnes used his signal flags to signal the good news back to the fort then mounted his horse, with a hail of bullets flying past him, rode hard towards his comrades. He reached the column safely and at three o’clock in the afternoon of September 1st, the troopers limped into Fort Apache.

Colonel Carr had lost five men killed and another five wounded at Cibicue. In an area about four miles from the fort was a small spring where both Indian and white stopped to water their horses a small band of Apache had murdered and mutilated three Mormon settlers, two telegraph repairmen and Major Cochran’s dispatch rider.

On September 3rd reinforcements from Ft. Thomas arrived. By that time the Apache bands had scattered.

After the Battle of Cibecue and the threat at Fort Apache, more troop were rushed to the area. Military authorities brought to trial five Indian Scouts that were connected to the uprising. It was the only time in their history Apache Scouts were tried for mutiny.

All five scouts were sentenced to death. Barnes questioned the execution of the scouts, claiming there was no need for such extreme punishment.  “Dead Shot” the oldest of the executed scouts had two small sons that were orphaned when their mother committed suicide.  Barnes assumed the de facto guardianship of the boys.  Years later, Dead Shot’s grandson, Sinew L. Riley, was a sergeant in the Army’s last company of Indian Scouts which was stationed at Fort Huachuca, Arizona.

A commendation by Major Cochran briefly described Barnes’ work on the mesa, commending his conduct during the trouble at Fort Apache in the highest terms saying that “he was prompt and unhesitating in the discharge of all duties assigned to him, more than once, being exposed to great danger.”  On November 8th, 1882, General William T. Sherman the Commanding General of the Army approved Will Barnes’ Medal of Honor. As authorized, the inscription on the medal read, “The Congress to First Class Private Will C. Barnes, Signal Corps, for bravery in action September 1st, 1881 at Fort Apache, A.T.”

Will C. Barnes, became one of only five Signal Corps soldiers to receive the nation’s highest award.

Like this article? Try: A Belle of Old Fort Sumner