Buffalo Soldiers Blacks reached new heights of glory during the Indian Wars in the West, where they became known as “Buffalo Soldiers” by the Indians because of the texture of their hair... 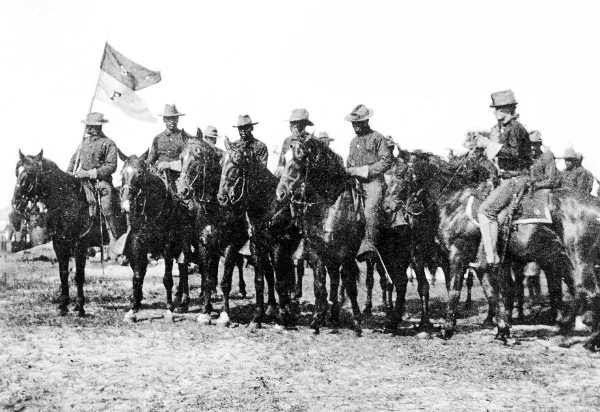 African-Americans fought bravely in the Revolutionary War, the War of 1812 and the Civil War, where nearly 180,000 Union soldiers were black.  Of those 33,380 were killed in action. Blacks reached new heights of glory during the Indian Wars in the West, where they became known as “Buffalo Soldiers” by the Indians because of the texture of their hair.  The term would be worn as a badge of pride by the black warriors on the frontier.

Following the Civil War the United States Army was reduced to a permanent peacetime establishment of ten cavalry and twenty-five infantry regiments, primarily for service against the hostile warrior tribes on the Great Plains and the Southwest.

Two cavalry regiments, the Ninth and Tenth, and two infantry, the twenty-fourth and twenty-fifth, were composed of black privates and noncommissioned officers, under white commissioned officers.  The first African American officer was Henry O. Flipper (1877) who was also the first black graduate at West Point.

For the next twenty-five years these regiments fought against hostile Cheyenne, Comanche, Kiowa, Apache, Ute, and Sioux Indians.  They also battled Mexican bandits and desperadoes along the Mexican border in nearly 200 engagements.

The black regiments were assigned in the West ostensibly to shield them from possible racial abuse of angry whites as a result of the Civil War.  However, many believed the fundamental reason was to sacrifice black troops, rather than white troops in the Indian Wars.

The men who answered the call for volunteers found duty rough in the tiny Spartan army whose mission was to bring and keep the peace on the frontier.  Enlistments were for five years and the pay for a private was thirteen dollars a month. They also got housing, meals, uniforms and the promise of an education.

Despite the hardships endured by soldiers stationed on the frontier during the Indian Wars, the black cavalry regiments had fewer court martials and less desertion than any other regiment in the West.

Colonel Benjamin Grierson, the first commanding officer of the Tenth Cavalry, ordered the word, “colored,” was never to be used in reference to his troopers, either as individuals or, as a group, in company reports.  “These men are soldiers of the Tenth United States Cavalry,” he declared, nothing more, nothing less.”

More than once black troops came to the aid of beleaguered white troops.  For months and even years at a time frontier garrisons such as Fort Huachuca in southern Arizona were manned by black regiments.  The campaigns against Apache chiefs, Victorio and Nana, actually more important than against the more publicized leader, Geronimo, were conducted mainly by the black cavalry regiments.  The quality of their fighting ability is indicated by the fact that between 1870 and 1890 fourteen black soldiers were awarded the Congressional Medal of Honor.