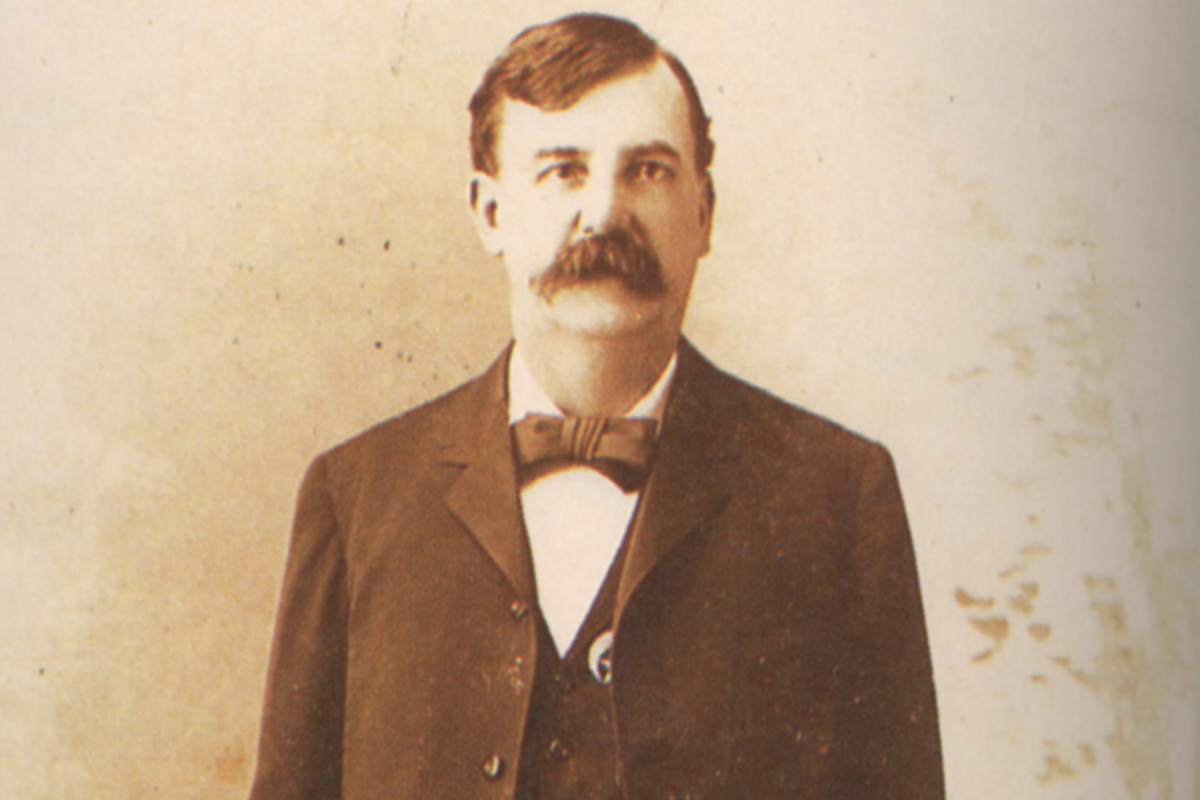 Henry Andrew (Heck) Thomas was one of the Old West’s most effective lawmen, rounding dozens of notorious desperados. His resume was most impressive, crossing paths with some of the West’s most notorious outlaws including members of the notorious Doolin, Dalton, and Sam Bass gangs. He was one of Oklahoma’s famed “Three Guardsmen,” that included Bill Tilghman and Chris Madden. Prolific Oklahoma author, Glenn Shirley, told me a few yeas ago,  Thomas was “by far the best lawman of the three.”

Heck was born in Athens, Georgia on January 3rd, 1850. His parents wanted him to grow up to be a Methodist minister, however, the youngster had other ideas.  When the Civil War broke out, his father and two of his paternal uncles quickly joined and all three gained distinction with the Confederate Army.  His father became a colonel commanding the 35th Georgia Infantry, his Uncle Henry also became a colonel and commanded the 16th Georgia Infantry. Another uncle, Edward Thomas, commanded the 49th Georgia Infantry. He rose to the rank of brigadier general. Twelve-year-old Heck received his “baptism of fire” serving as a courier for his uncle during the fighting in Virginia.

After the war, his father became the first city marshal of Atlanta and when Heck was seventeen, he began his career as an officer of the law. It was there he gained fame as a fearless lawman.

In 1875, Heck, now married, packed up his family and moved to Galveston, Texas where he took a job as a railroad guard for the Houston and Texas Central Railroad. The route was rampant with train robbery attempts.  Just a year later, the Sam Bass Gang attempted to rob the train, some twelve miles southeast of Dallas.  In the gunfight that broke out during the attempted robbery, Thomas was wounded but the gang rode away empty-handed, thanks to his foresight.  Heck had placed the cash in an unlit stove, while stashing “decoy” packages in the safe.  By the time the outlaws discovered the ruse, the train was long gone.  Afterwards, he was promoted to a Fort Worth detective for the company and by 1879 he held the position of Chief Agent.

Heck’s next job was with the Fort Worth Detective Association.  Continuing his success, he soon pursued brothers Jim and Pink Lee, two brothers who led the notorious Lee Gang, a bunch of horse and cattle thieves had been plaguing Cooke County, Texas and the Chickasaw Nation to such a degree that both the settlers and the Indians were up in arms.  In May 1885, when U.S. Marshal James Guy formed a posse to go after the gang, they were ambushed by the gang and four of the posse were killed.

Soon after, rewards totaling some $7,000 were posted for the capture of the Lee brothers and Heck Thomas began the pursuit.  After four months of continuous searching, Thomas, leading a posse caught the Lee’s off-guard in a hayfield near Dexter, Texas.  Giving them a chance to surrender, as was his custom, the pair answered by opening fire with their Winchesters.  In the gunfight, both brothers were killed, and the posse collected the reward. The newspaper proclaimed the next day:

“The Lee brothers, the most notorious desperadoes in Texas finally go down with their boots on.”

Shortly bringing down the Lee brothers, in 1886, Heck was appointed a Deputy U.S. Marshal.  Moving his family to Fort Smith, Arkansas, Heck worked under the “Hanging Judge,” Isaac Parker. Over the next seven years, Thomas would earn a reputation for being one of the most efficient deputies working the lawless land of Indian Territory. On his first assignment out of Fort Smith, he apprehended eight murderers, a bootlegger, a horse thief, and several other hard case’s.

The danger and time away from home had taken a toll on his marriage. Heck’s wife, Isabelle filed for divorce and returned to Georgia with their five children.

In 1888, while Thomas was recuperating from wounds received in the line of duty in Tulsa, Oklahoma, he met a schoolmarm named Mattie Mowbray.  A year later, in October 1889, the two were married and Heck soon began a second family.

By 1891, Thomas, along with two other Deputy U.S. Marshals, Chris Madsen and Bill Tilghman, began to work together to bring in some of the most notorious outlaws of the time.  Before long, the newspapers were calling the trio, the “Three Guardsmen” and along with Bass Reeves, were credited with bringing law and order to the Indian Territory.

In 1892, Thomas and Madsen were pursuing the Dalton Gang who had been terrorizing the Indian Territory robbing trains. Since three of the Dalton brothers had been deputy marshals it was an awkward situation for the marshals. One brother, Frank Dalton, had been killed in the line of duty.

On October 5th, 1892, the Dalton gang decided to do something that not even the James-Younger boys ever tried, rob two banks in the same town on the same day. Unwittingly, they selected Coffeyville, a town they had lived. They decided to wear false whiskers. Wait…..it gets worse. There was a road construction project. It turned out to be a replay of the Northfield, Minnesota fiasco that terminated the James-Younger gang.

The local citizens opened fire and shot the gang to pieces. Only young Emmett Dalton survived, was captured and sent to prison. He would later say that Heck Thomas had been the gang’s “nemesis.”

Three months earlier, the Dalton Gang had robbed a train in Adair, Oklahoma, Thomas had doggedly tracked them into the Osage Nation and located their hideout.  Continuing to track the outlaws, he came upon their campsite about 20 miles south of Coffeyville.  As he continued the pursuit, he received the news that four of the Dalton Gang members, including Bob and Grat, had been killed in Coffeyville. Emmett Dalton, was the only survivor, having been severely wounded.  Hearing the news, Heck continued to Coffeyville and identified the bodies for the Wells Fargo Company.

In August 1896 Thomas led a posse that tracked Bill Doolin. Doolin had hooked up with the Daltons to form the Dalton-Doolin in the early 1890s robbing banks and trains. Doolin was, by trade a cowboy but to celebrate the Fourth of July in 1891 he and some friends decided to import a keg of beer into “Dry” Kansas. When lawmen tried to confiscate the booze, a fight broke out and two officers were wounded. From that day forth Bill Doolin was a wanted man.  Some historians believe he was the mysterious 6th man at Coffeyvile when the Dalton Gang met its Waterloo. He had been captured, convicted and imprisoned but escaped on July 5th, 1896. With the death of Doolin the long arm of the law had decimated the outlaw gangs of Oklahoma.

Heck’s long career as a Deputy U.S. Marshal was winding down and in 1902 he resigned and took a job as chief of police in Lawton, Oklahoma. He died there at the age of 62 in 1912.