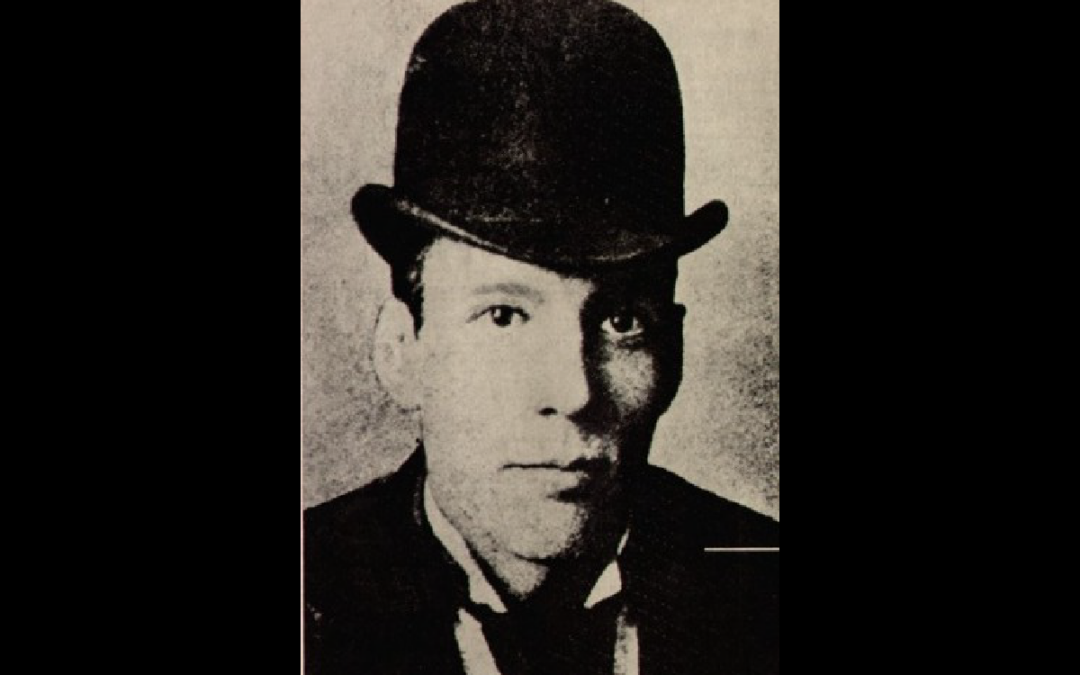 Someone asked me the other day why Marion Hedgepath isn’t a better-known outlaw. I have at least a dozen outlaw encyclopedias and he isn’t listed in any of them. Hedgepath should be better-known. He was a cold-blooded killer and train robber. Like Jesse James, he and his gang also robbed the Glendale train. I reckon Marion Hedgepath isn’t a great name for an outlaw. Maybe Marion should have considered following Henry McCarty’s or Janes Butler Hickok’s example and taken a more memorable nom de guerre.

Marion was a good-looking guy, standing six-feet-tall with dark, wavy hair. And he dressed well, sporting a nice suit and a derby hat. His nicknames included the “Handsome Bandit,” the “Debonair Bandit,” and the “Derby Bandit.”

He was born in Prairie Home, Missouri in 1856, left home when he was fifteen to be a cowboy and by the age of twenty he was robbing trains. During those wild escapades he shot and killed two men, one in Colorado and one in Wyoming.

Sometime in 1882 he and a couple of pals named Cody and Officer robbed a store in Tusumbia, Missouri and managed to escape a pursuing posse. Several months later Hedgepath and Cody were blowing up a safe in a small Kansas town. A furious gun battle ensued and Cody was killed.

Marion managed to get away but was captured, convicted in Cooper County, Missouri in November 1883 and sentenced to seven years in the state pen. While awaiting transfer in a local jail he escaped and seriously wounded a deputy sheriff. He was quickly recaptured and hustled off to prison before a local lynch mob was able to string him up.

It was in the Missouri State Penitentiary that he met Adalbert “Bertie” Slye. Both were released in 1891 and teamed up with two other hard cases, “Illinois Jimmy” Francis and Lucius “Dink” Wilson. The gang, known as the “Hedgepath Four,” went on a wild rampage of robbery and violence that prompted The New York Times to call them “the most desperate gang of train robbers that has operated in this country for many years.”

The noted Pinkerton Agency was now in hot pursuit of the gang. During that time the Hedgepath Four were hiding out in the lawless section of Kansas City known locally as “Seldom Seen” because the police there were seldom seen.

On Christmas Eve, 1891 the gang pulled their biggest heist, holding up a train a few miles west of St. Louis at Glendale, Missouri, the same site where the Jesse James and his gang had pulled off their celebrated robbery in 1879. Marion set the dynamite, blowing off the side of the express car and when the messenger crawled out through the smoke he shot him dead. The take was $40,000.  They headed for Salt Lake City where they split up.

Thanks to some slick detective work, Pinkerton agents finally caught up to Marion and Sly in San Francisco in 1892. The two were taken back to Missouri, tried and convicted. Adalbert was given twenty years and Marion, twenty-five years in the state prison.

Not long after his confinement Marion somehow got his hands on a hacksaw. He cut through the bars and was making good on his escape when he got confused and flew into a rage, releasing a vocabulary of oaths that would make a muleskinner blush. This alerted the guards and he was quickly apprehended.

Hedgepath was pardoned in 1907 by the governor after spending fourteen years behind bars. His pardon resulted after he snitched on his cellmate, H.H. Holmes, a mass killer who’d murdered a dozen women for their insurance and was serving a lesser sentence under an assumed name.

By the time Hedgepath was released he was but a shadow of his old self. His hair was thinning and turning gray. His eyes were sunken, cheeks hollow and his appearance was that of an old man. He announced he’d learned his lesson and was going straight.

Apparently Marion changed his mind and returned to his old ways. He was arrested for burglary in Iowa in 1908 and sent to the state prison. He was released a year later.  On New Year’s Eve, 1910, he was shot and killed by a policeman while holding up a Chicago saloon.

James “Illinois Jimmy” Francis was shot and killed in 1892 after he killed a cop.

Lucius “Dink” Wilson killed a detective in 1892 and was executed a year later.

Adalbert “Bertie” Slye was arrested in Los Angeles. Among his possessions was a gold watch taken from the murdered messenger during the Glendale Train Robbery. He pled guilty and was sentenced to twenty years.

The Mexicans have a dicho that best-describes these outlaws, “Quien llama el toro, aguanta la cuernada.” He who calls the bull must also take the horn.