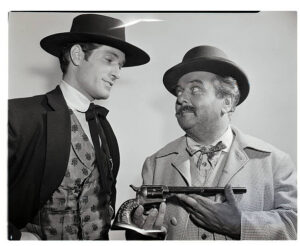 I never bought into the extra-long barrel O’Brian carried on TV. I really don’t buy into the 10-inch barrel. That was an eyewitnesses account. We really have no solid information on the guns Earp carried during his time in Tombstone. The testimony during the Spicer Hearing indicated he had a long pistol, but it does not identify it as a Colt or any other maker.

The late Joe Rosa wrote a few years ago: “In William B. Shillingberg’s Wyatt Earp and the ‘Buntline Special’ Myth, published in 1977, he lays it on the line what most of us have known for years, that Stuart Lake invented the term ‘Buntline Special’ and I doubt very much if he had ever heard of Earp. Masterson and the others since their ‘fame’ was strictly local in and around Dodge and other nearby places. Certainly, as Roger Jay and others have pointed out, Earp never earned the sort of respect and adulation in life that he achieved in death.

“When I visited Colt’s in the early 1970’s, I recall Marty Huber who then ran the research division, was very anti-Lake and the others who had invented the Buntline story simply because they were inundated with requests for information. Also, my own and others’ research concluded that Buntline never visited Dodge City, and during the 1876 celebrations was very much in the East.”

In the 1870s and later, Colt made all the long-barreled pistols at 16 inches in length and left them unattached. When someone ordered one with a shorter barrel but longer than the standard 7 ½ inch barrel, they just cut off the barrel to the requested length and charged the buyer one dollar and inch for anything over 7 ½ inches.

But remember there is no supporting evidence that he ever received a long-barreled pistol from Buntline or that it was ever called a “Buntline” before Stuart Lake coined the phrase in his Wyatt Earp: Frontier Marshal in 1931.

Despite what Lake wrote, there is no evidence that Buntline ever went to Dodge City or ever met Wyatt Earp.

Colt did make a 10-inch and 12-inch .45. In western mythology, the Buntline is the equivalent to King Arthur’s sword, Excalibur.

Before any high-dollar buyer purchases a photo, firearm or any other collectible they demand provenance.  It’s the same with the Buntline story. ​Where’s the provenance?​