The Long Drive The Long Drive from the Texas brasada country south of San Antonio up to Abilene was about eight hundred miles and could take as long as two months... 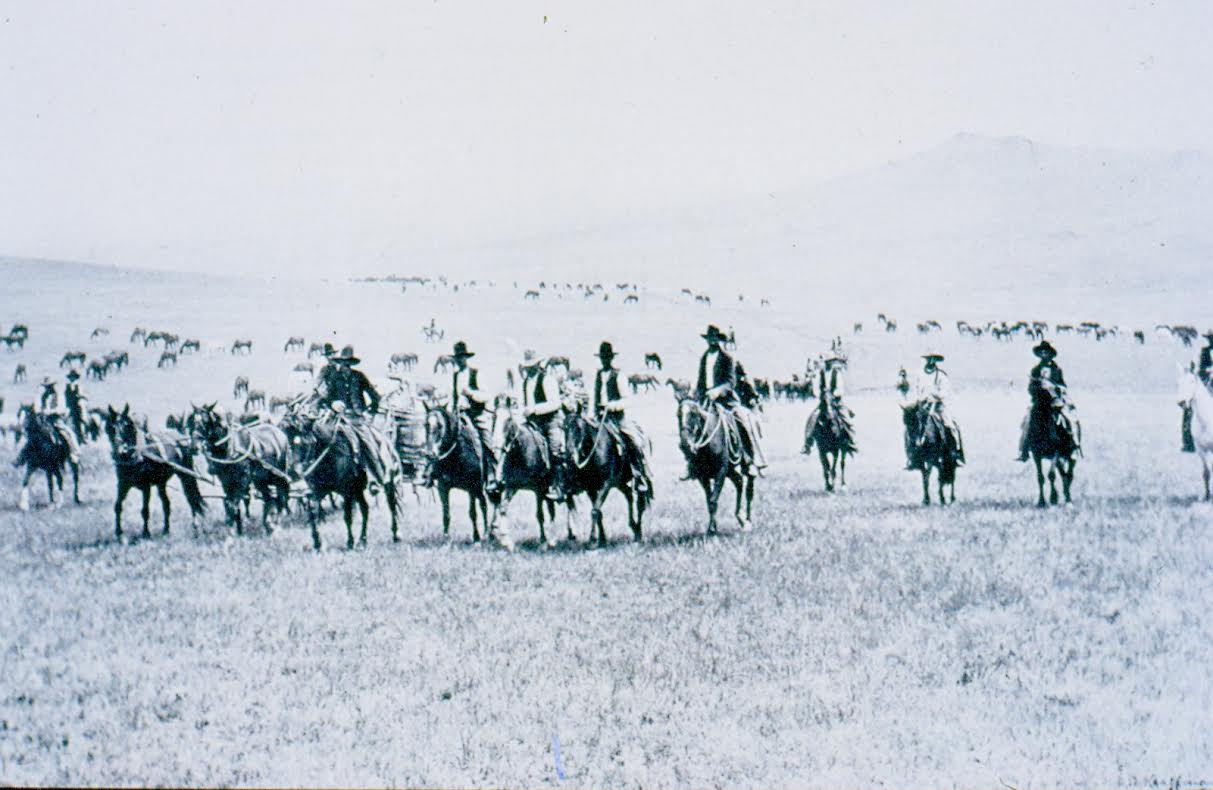 The Long Drive from the Texas brasada country south of San Antonio up to Abilene was about eight hundred miles and could take as long as two months. Trail drivers didn’t push the cows hard as they’d lose too much weight and the buyer paid by the pound.

There are varying opinions on this but usually, a trail herd of any size required a crew of 10 to 15 men. The trail boss usually rode point seeking water or mapping the route. The cook was up front too. Behind them were two lead riders, followed by two flankers. Off to the side was the horse wrangler. Bringing up the rear were the dust-eating drag riders. The worst cowhands or the new guys usually got that job. The average size of the herd ranged from 1,500 to 2,500.  Smaller herds might number around 500 head. A ten-man outfit was enough to handle a herd of 2,500 or a ratio of one man per 250 beeves.

In 1884 a big herd of cattle was driven up from the King Ranch in south Texas and combined with another large herd at Dodge City to drive on to Montana numbered 5,600 head. However, the record, as far as we know, was by another Texas outfit that started from the Brazos River to California in 1869 with 15,000 head. They had 200 hired hands, over a thousand horses and several wagons. They were divided into four herds and camped together only when there was danger of Indian attack.

Each cowhand had a string of five to ten horses.  The outfit usually had a kid who drove the hooligan wagon holding the bedrolls. His job was to help out the cook.  The wrangler was also a younger hand and would help out also.

The 1871 drive to Midwestern markets was the largest ever: 700,000 Texas cattle were driven to Kansas alone. Other markets included the Indian reservations, the Idaho, Montana and Colorado boom towns.

By the mid-1780s the eastern markets were demanding a better grade of beef than the lean and mean longhorn. Herefords were introduced to Texas in 1876 and in the next few years replaced longhorns as the major range breed.

Railroads began also began to build lines into Texas in the mid-1870s but their shipping costs were so high it was cheaper to drive the cattle north. Because of settlement in Kansas the citizens in Abilene decided their future lay in farming, the trail town kept moving west. The Santa Fe Railroad reached Dodge City in 1871 and it soon became the end of the trail town. Drovers began bringing their cattle to Dodge on the Texas Trail.

During the years 1850s to the early 1900s some 27 million cattle were driven from Texas to the railheads in Kansas.

While on the trail, the Charles Goodnight outfit made use of home remedies for illnesses. Coal oil was used to combat lice, and prickly-pear poultices were thought to help wounds heal. Flowers of the bachelor’s button plant were used to cure diarrhea, salt and bison tallow were used for piles, and bison-meat juice was drunk as a general tonic. The cook fed the cowboys canned tomatoes to ward off scurvy.

Goodnight built the first chuckwagon that went on to become one of the icons of the trail drives.

During those drives on the Great Plains there were various hazards. Border riff-raff was waiting at the Kansas to rustle cattle herds. During the 1860s and 1870s there was danger of Indian attacks. But crossing swollen rivers presented the greatest danger and chain lightning caused more stampedes than anything else. An early cowboy named G.W. Mills wrote of one such storm: “Then it hit us in full fury and we were in the midst of a wonderful electrical storm. We had the following varieties of lightning, all playing close at hand, I tell you. It first commenced like flash lightning, then came forked lightning, then chain lightning, followed by a peculiar blue lightning. After that show it rapidly developed into ball lightning, which rolled along the ground. After that, spark lightning, then most wonderful of all, it settled down on us like a fog. The air smelled of burning sulphur. You could see it on the horns of the cattle, the ears of our horses and the brims of our hats.”

Sometimes chain lightning would extend from six to eight feet from one end of a longhorn to the other.

During those drives on the Great Plains chain lightning caused more stampedes than anything else.

Frank Dobie the great Texas folklorist wrote on longhorns. He  aptly describes the herd instinct in a stampede.

“When cattle stompede, they run. The herd instinct in the bovine is so great that he can go from a state of watchful relaxation with his fellows to pandemonium in an instant.  It is the only ignoble thing he is capable of for he is just a poor dumb cow brute who ain’t got no mama or papa and he never went to school.”

When the cowboys hit a trail’s end town like Abilene or Dodge City after some two months on the drive the first thing they​ did was ​to draw their pay and head for the barber shop and get a bath and shave. That would cost six bits or 75 cents. Next, they shed their duds at the mercantile store and get some new ones. A pair of trousers would cost $1.00-$1.25. ​A new pair of long johns might cost a dollar. ​A new pair of boots would cost $7 to $15. A pullover shirt might cost a dollar and a new hat would set you back about ​three to five dollars.

A steak dinner would cost about a dollar and then on to the saloon where a glass of beer would cost one bit or 12 ½ cents and a shot of whiskey, two bits or a quarter.  He could try his luck at a game of chance then head for the redlight district. A short time love affair with a prostitute would cost around a dollar. There were also dance halls where he would pay 75 cents to a dollar for a dance ticket. Prostitutes and dance hall girls sometimes outnumbered so-called decent women by as much as 25 to l.

After a few days the cowhands climbed on their mounts and headed back to Texas. Next spring it would begin all over again.