Tom Bullock’s Railroad Tom Bullock was a gregarious, smooth-talking promoter. He'd been a bartender Prescott's Whiskey Row before heading to New York where he made a fortune building street railways... 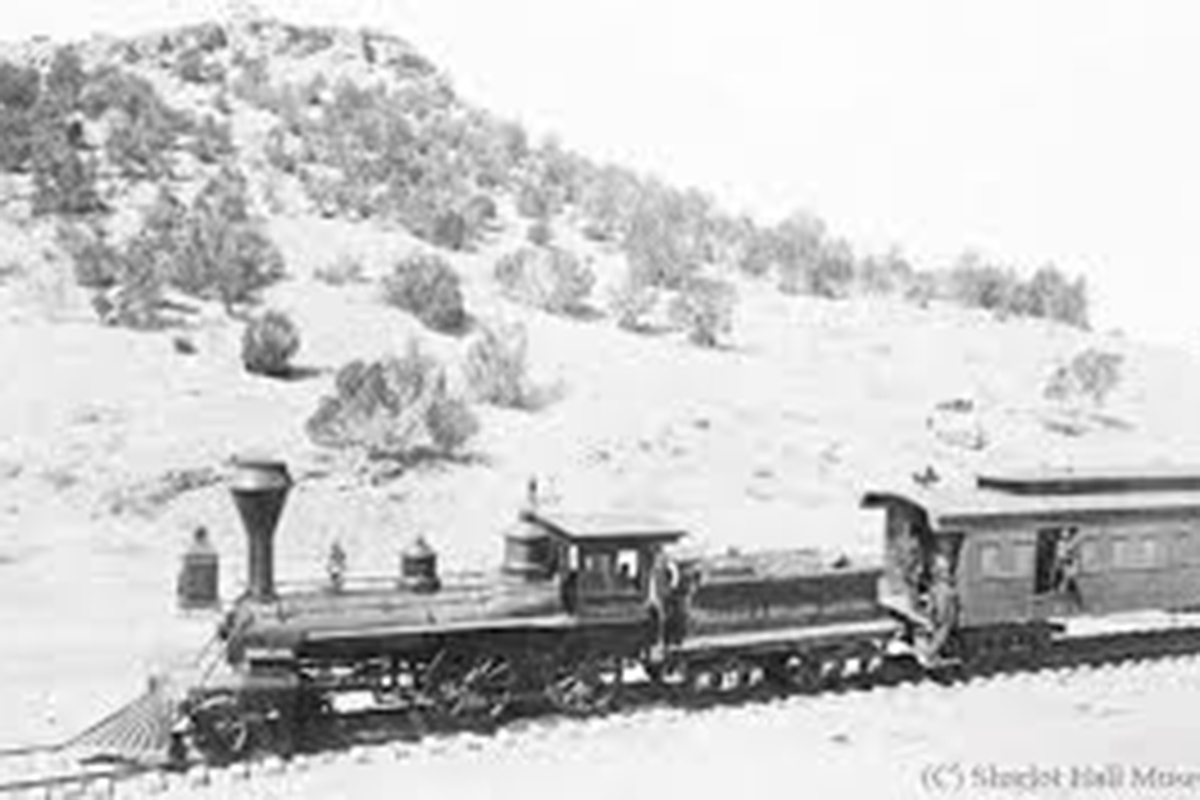 Tom Bullock was a gregarious, smooth-talking promoter. He’d been a bartender Prescott’s Whiskey Row before heading to New York where he made a fortune building street railways.

Bullock proposed building a railroad from Seligman, on the 35th Parallel mainline, to Prescott. Meanwhile, Prescottonians raised $300,000 to bring the railroad to their city. The seventy-two-mile branch would connect at temporarily called, Prescott Junction, running south through Big Chino Wash to Prescott. The contract stipulated that Bullock’s railroad would reach Prescott by midnight on December 31st, 1886 or face a stiff $1,000 a mile penalty. In other word’s, meet the deadline of be fined seventy-two thousand dollars.

Construction went smoothly until the shady ladies arrived and the tent saloons materialized in the construction camps. On newspaper reporter noted, “I saw an entire freight train of 30 cars laden with bottled beer….bound for the nearest end of track.” Prescott’s society of gamblers laid the odds at 10 to 1 Bullock wouldn’t meet the deadline. Some of the rounders tried to hedge their bets by sabotaging the railroad line.

Cattlemen, angry over the railroad right-of-way across their grazing lands, had their cowboys stampede cattle through a construction site. Another group of cowboys tried blowing up a caboose while a band of vandals tried to wreck a train by removing a rail. Their plot was foiled when the engine ran aground before hitting the damaged section. Another scheme was foiled when a cloudburst hit and extinguished the flames of a trestle that had been set afire.

The odds against meeting the deadline rose to twenty to one. Still, the track layers and Gandy dancers trudged on towards Prescott.

On December 30th, 1886 the line reached Granite Dells, then known as Point of Rocks and by the evening of December 31st they were two miles from Prescott. Lanterns were lighted as the railroad workers kept tying ’em in and laying ’em down. The gandy dancers bounced on their shovel handles to lift the rails so ballast could be shoveled beneath. Then they tamped them down. Citizens who had bet against the odds shouted encouragement from the sidelines while others joined in to help. With just five minutes to go, hundreds cheered as Governor Conrad Zulick drove a gilded spike into a tie painted red, white and blue.

The little16-ton steam engine, Hassayampa rolled ceremoniously into town. Territorial Arizona’s capital city was at last linked to the outside world by rail.

The operation of the Arizona Central Railroad was a textbook story of inefficiency. The entire line consisted of two small locomotives, four box cars and one passenger car, all second hand.

For the first few months Prescott had no turntable so the two little steam engines, Hassayampa and the F. A. Tritle had to make the return trip to Prescott Junction in reverse.

Fare on the Central Arizona Railway was an affordable ten cents a mile so a ticket to the Santa Fe mainline at Prescott Junction cost seven dollars and twenty cents but one could make an even better deal by dealing with the conductor. The schedule was flexible too. At Banghart (Del Rio) the crew would often pause for a beer and a crap game with the section crew. The train also paused frequently in the woods along Big Chino Wash so the crew and passengers could go deer hunting.

Since the line was built in Big Chino Wash there was frequent flooding especially during the summer monsoon. After one heavy rain the tracks collapsed, tossing the little engines into a mud hole. The tracks were often washed out. After one storm the Hassayampa lay on its side in the mud for three weeks before a team of mules could get it upright. Locals began calling Bullocks line, the “Mudball Express.”

By 1891 the Central Arizona Railroad was in trouble. Ties were rotting, trestles were in need of repair and the tracks were often washed out. The big flood in 1892 was the final blow. Tom’s railroad was broke.