Apache Scouts The longer we knew the Apache scouts, the better we liked them. They were wilder and more suspicious than the Pimas and Maricopas, but far more reliable, and endowed with a greater amount of courage and daring... 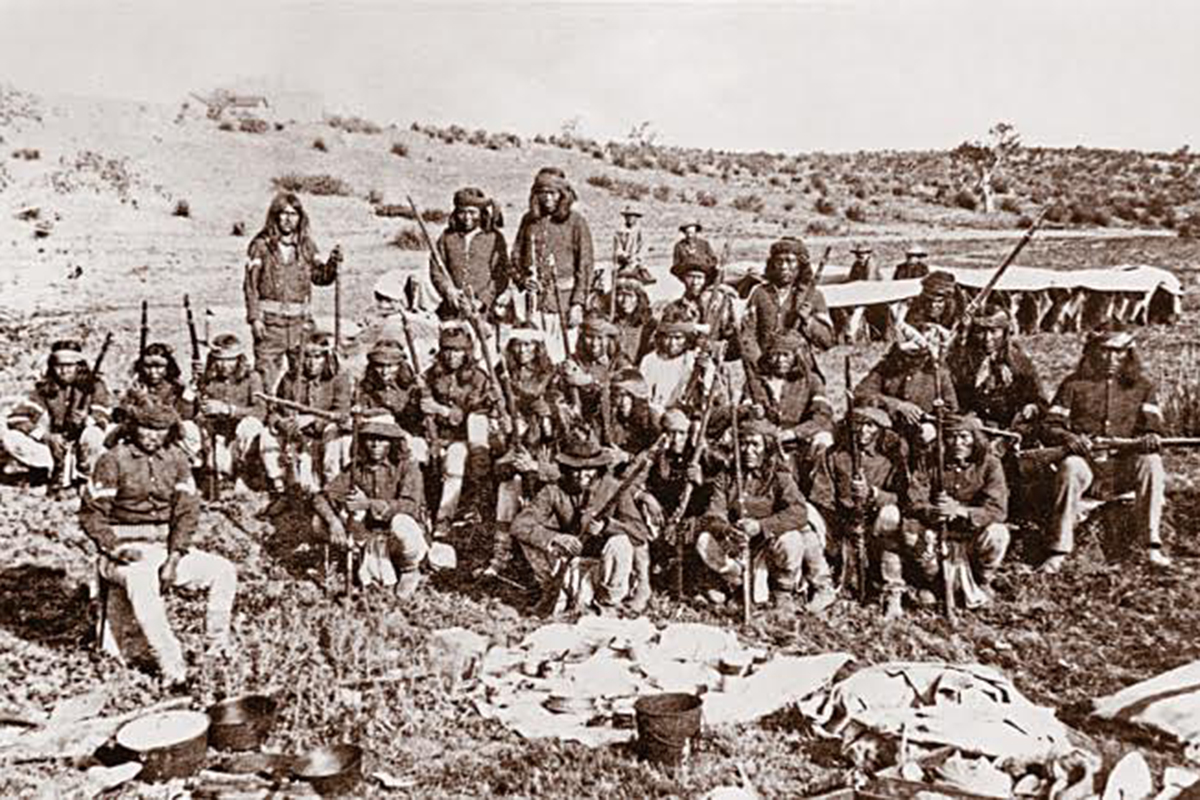 The Apache never saw themselves as a political unit. They were families, clans and bands. Being matrilineal, chiefs often united bands by marriage.  Many clans were hostile with each other and Crook exploited these hostilities to recruit his scouts.

Author Dan Thrapp: “It grew increasingly apparent that the success of the troops depended on the scouts. Without scouts, the troops couldn’t find the enemy; with scouts they rarely missed. It was as simple as that.

Captain John Bourke, Crook’s Aide de Camp: “The longer we knew the Apache scouts, the better we liked them. They were wilder and more suspicious than the Pimas and Maricopas, but far more reliable, and endowed with a greater amount of courage and daring. I have never known an officer whose experience entitled his opinion to the slightest consideration, who did not believe as I do on this subject.”

Thrapp: The Winter Campaign of 1872-1873, “Crook gradually came to depend almost entirely on the Apaches for his scouts.”…… “The Yavapai were most valuable in the country they knew best and as the commands moved further eastward they were gradually replaced by Tontos and other Apaches.”

In 1883 when Crook returned from Mexico following the successful campaign to bring Geronimo and the rest in he singled out special recognition for officers like Crawford, Gatewood and Mackay; guides Al Sieber, Archie McIntosh and Sam Bowman, interpreters Mickey Free and Severiano but he made it plain his conviction that the success was due primarily to the Apache scouts and the men who led them. He believed it was a total vindication of his policy of using the scouts to conquer the renegades.

Following Geronimo’s surrender the last of the Chiricahua were shipped to Florida. This included loyal Chiricahua scouts including non-Chiricahua scouts who were married to Chiricahuas. Among them was Chatto who’d been in Washington and wore into captivity a silver medal given him a few days earlier by the President of the United States.

Crook was outspoken in his remarks on the treatment of the Apaches especially the loyal scouts who’d rendered such fine service. “During the entire campaign, from first to last, without any exception, every successful encounter with the hostiles was due exclusively to the exertions of Indian scouts, and it is the unanimous testimony of officers commanding scout companies, that the Chiricahuas were the most subordinate, energetic, untiring and, by odds, the most efficient of their command.”

In the end the loyal Chiricahua scouts were disarmed and declared to be prisoners of war.