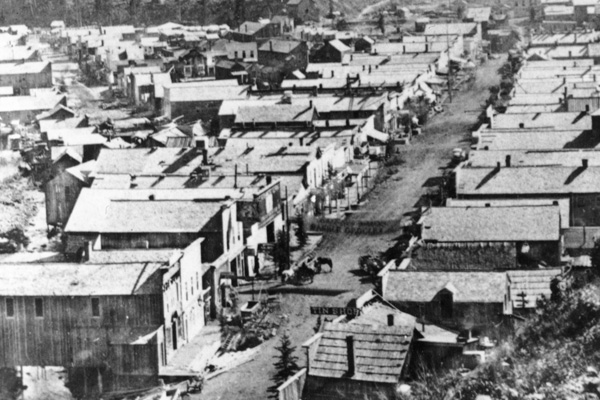 WARNING: This excerpt from the recently released Wild Bill Hickok: Deadwood City—End of Trail uses a fictional treatment of the facts derived from the testimony of Carl Mann at the Yankton trial of Jack McCall, and Harry Young’s 1915 Hard Knocks—Life Story of the Vanishing West.

From this and other verifiable sources, we know the nature of the events surrounding this story. For example, we know that Calamity Jane traveled with Wild Bill on the wagon train from Cheyenne to Deadwood; and that the Black Hills Pioneer reported severe weather for that first week in August. What we will never know, is what conversation took place that night, or what Wild Bill was thinking.

What was Wild Bill’s last night like? What would motivate someone without justifiable cause to kill this legendary American hero? With extensive knowledge of his subject, the author has imaginatively filled in the blanks, recreating the pivotal moment in the lives of both hero and villain.

It was a cold and windy night in Deadwood City—unusual weather for the first day of August. But this centennial year (1876) had also been an unusual year on the Northern Plains. George Custer and his immediate command, men of the Seventh Cavalry, had all been butchered along the Little Big Horn River just a short six weeks earlier. The Sioux and Northern Cheyenne were all at war with the United States military. It was not safe to travel into the Black Hills—the local Indians were furious that the white man was trespassing on their sacred Paha Sapa (lands), looking for the precious yellow rock. The Black Hills were still part of the Sioux Reservation, as granted by the 1868 Fort Laramie Treaty—and the Sioux wanted the white man off their land.

James Butler “Wild Bill” Hickok had arrived only a few weeks before with his good friend “Colorado Charlie” Utter. They had left Cheyenne, Wyoming, in the latter part of June with a large wagon train, driving north to Fort Laramie, where the renowned, bullwackeress, “Calamity Jane” Cannary had asked to join them for no other reason than that she had recently worn out her welcome back in Cheyenne, and the mining boom in the Hills seemed like a good chance to get square again. Wild Bill had been thinking similar thoughts. The boom in Deadwood City just might be his chance to hook up with some mining speculators, freighting contractors, or even help Charlie run his new pony express mail service. There would also be a need for civilian law enforcement and authority, and he had plenty of experience in this profession from his days down in Kansas, working those tough cowtowns during the early cattle drives. Controlling a bunch of gold crazy miners would be easy business for a man who had spent so many dark nights facing armed, drunken and fearless Texas cowboys. This new gold boom could indeed be a great opportunity.

Wild Bill liked this little gaming and drinking place called the No. 10 Saloon. Located on the lower end of Deadwood City’s rapidly growing Main Street, this simple rough-sawed wood structure had easy access from Charlie Utter’s camp across Whitewood Creek, and offered a fella the chance to avoid unwanted exposure on the heaviest part of the bustling street. Everyone in town knew he was here; his reputation had preceded his arrival. Wild Bill could hold his own when it came to trouble, and he had been forced into many life-and-death situations by circumstances beyond his control, but those damn dime novel publications back East were turning him into some type of immortal—an image even he knew he could not compete with. Now he had to be aware of his complete surroundings at all times. It had become a tiring and endless job in its own right.

There were actually two gulches in Dakota Territory that consisted of about a half-dozen little mining camps all clustered on top of each other, and the busiest of them all was Deadwood City—located right between Deadwood and Whitewood Creeks. Wild Bill could see the potential here, and he just knew that he would somehow make his mark in this place. He would find it here somewhere, in some way. In the meantime, there was plenty of gambling to keep him occupied—the card tables always seemed to be full of eager players.

Most of Deadwood’s prospectors were anything but miners—former Confederate and Union soldiers, cavalry scouts, freighters, ranchers, common laborers, recent immigrants, cowboys, lawmen, soiled doves, settlers and, of course, the outlaw road agents. The most experienced ones had followed the rushes to the Montana gold fields a decade earlier;.Bannick, Alder Gulch, Anaconda, and Helena had all run their course as mining camps and were established now. Interestingly, the new Black Hills gold rush was located right in the middle of the frontier, and yet no one had noticed the darn place before.

Even Wild Bill, who had scouted for the U. S. Cavalry through this region with his old pards, “Texas Jack” Omohundro and “Buffalo Bill” Cody, had never caught windof it. The Black Hills were always just considered another obstacle in the way to somewhere else. His two old scouting friends had been busy playing to the dandies and their sweethearts back East on the theater stages. However, Bill had heard that Cody was now out West again scouting for the Fifth Cavalry, and had recently gotten himself in an Indian fight down near Warbonnet Creek, a little crossing just south of the Black Hills on the wagon trail above Fort Laramie. Apparently, Cody had come out of that scrap with a small Indian trophy—something else to entertain the folks back East. To Wild Bill, there seemed to be something almost too easy about this mining boom, as if it was sure to be the most successful gold rush yet. There were already quite a few business men in town looking to make some quick money.

This was a pretty slow night in the No. 10 Saloon. Bill had his customary seat next to the west wall which offered him a complete view of the saloon floor, and allowed him to keep his back covered. Carl Mann, one of the owners of the No. 10, sat in to play cards earlier in the evening, just to keep a game going.

The two other men playing at the table were new faces to Wild Bill. The tallest one had just completed his enlistment with the Third Cavalry out of Fort McPherson, Nebraska, and barely spoke English. The ex-cavalry soldier was from one of those old countries on the European continent, and smelled of black powder and pickled eggs. The other player at the table was a young man who looked to be in his early 20s and had an awkward way about him that made Bill cautious, but more curious than alarmed.

Bill Sutherland was his name, he said, though it probably wasn’t. He seemed to be running from something, maybe not the law, but from something he was afraid of facing—perhaps a bad family, or a rotten marriage, or some other type of situation he didn’t really want to be any part of. There were so many terrible stories anymore—the Great War had left so many people desperate and destitute, and then there were the pioneer—Indian conflicts during the great migration West. It was a tough time just to be alive for some folks.

This young Sutherland fellow was not a good card player. He had no idea how to bluff a good hand, let alone a bad one. His eyes always started jumping around, darting from side to side like little fireflies whenever he was dealt a good hand. The sweat that formed on his thin, brown mustache, paired with a rough goatee that covered a sallow face was almost humorous. You could read this kid like a book. Bill would have almost felt guilty taking his money, except he himself was so hard up for steady cash, that he had to remind himself that he was overextended with most of the saloons around town. Charlie Utter, and Hickok’s other old partner, “California Joe” Milner, whom he had run into the first day he arrived, were probably both tired of loaning him cash. They were good friends and would never question his honesty, but he knew that he was pushing his weight around farther than he ought to with both of them. He could not bring himself to write to his beloved wife Agnes for some expense money; after all, he was supposed to be making their fortune here in the Hills.

Wild Bill kept looking for Sutherland to give away his hand, and then he would calmly and deliberately bluff the young man into folding after building up the pot. Carl Mann knew what was going on, but that’s what gambling was about. A simple game of chance—you either win or lose, but you only play what you can afford to part ways with. Besides, these young men would probably leave the mining camps soon anyway. There was only so much gold to be found, and the odds were heavily against them finding it. The real money was in the business operations. They always paid off in the gold rush camps.

If Bill Sutherland was annoyed that Wild Bill was beating him, he sure didn’t show it. In fact, he just kept playing no matter how obvious it was that he didn’t have a chance against the older and more experienced gambler. Hickok was 39 years of age and had probably started gambling before this kid was out of cloth wraps. Why was this young man still at this table? Apparently, he felt that he had to show the “great” Wild Bill that he wasn’t afraid of him, even if it meant going broke to do it. Bill didn’t care. Bring ‘em all in, line ‘em up, and sit ‘em down. He needed the easy cash.

Finally, the young gambler ran out of money. The ex-cavalry soldier quit about 30 minutes earlier, and Carl Mann had only stayed in the game to keep Wild Bill in the saloon. He was good for business. Sutherland had thrown his purse full of gold dust into the final pot, but when the bartender weighed it out, the sack was short about $16 dollars. The young miner said he would make it right with gold dust he had at his camp tent, so he left for a few minutes then returned with some more dust which, when weighed out, was just enough to clear the debt against Wild Bill. Hickok could tell the young fellow was completely out of cash after paying him off, and asked Sutherland, “you spent it all on cards?” “Yes,” was the reply from the inexperienced gambler. “Well then, here’s a dollar for your supper, pard,” was Bill’s response, “and don’t spend it at the tables,” he followed up.

Sutherland declined the generous gift and shuffled out the front door. “Well, we probably won’t see him for a while,” Hickok muttered to no one in particular as he headed out the front door onto Deadwood City’s busy Main Street. He was an open target on this street, and he had to remain conscious of danger—not like when he was sittingin the safety of the west wall in the No. 10 Saloon.