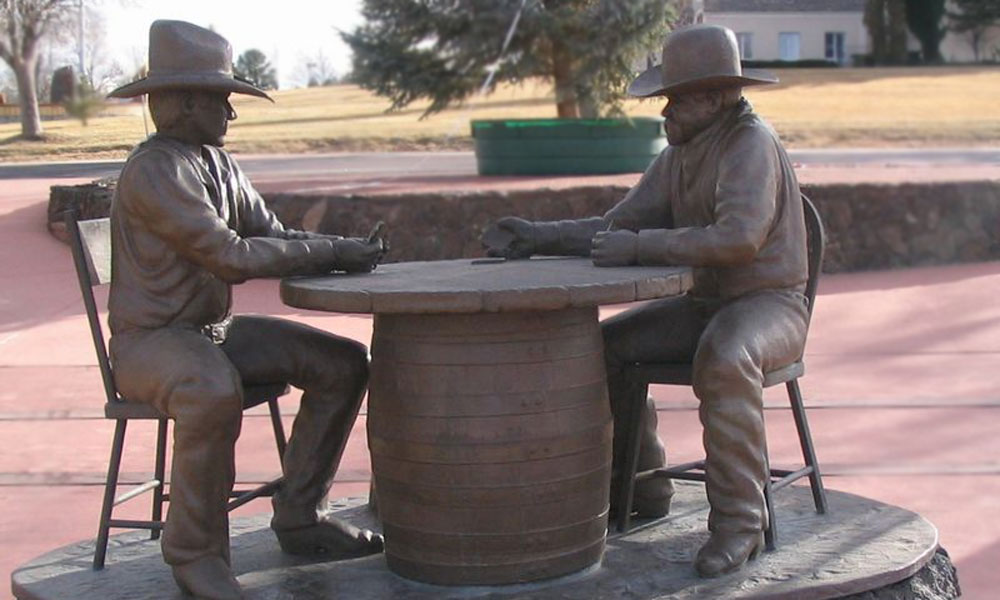 Arizona is a place that loves its myths and legends. Sometimes it’s difficult to separate fact from fiction. Such is the story of Corydon Cooley and Marion Clark. One version has it that in 1876 the two were partners in a 100,000 acre ranch near the Mogollon Rim. They had a disagreement and decided to dissolve their partnership. One would stay and the other would move on. Had this been a B-Western movie they might have had a gunfight in the street to settle the matter but this was the real west so they decided to settle it with a card game. The game they chose was Seven-Up, a popular cowboy game where low card wins. Mr. Clark was holding a three and as he dealt a card to Mr. Cooley he said, “If you can show low you win.”

Mr. Cooley turned over his card showing the deuce of clubs and replied, “Show low it is.”

He bought out Mr. Clark who moved on. Soon after several Mormon families moved in, bought out Mr. Cooley and a little community was born. In honor of the card game they named it Show Low. The main street was named Deuce of Clubs.

Another version says the card game did take place but not between Clark and Cooley but Cooley and Henry Huning.  Huning was leading by a point. Cooley was holding a three. He told Huning to show low. Huning turning over the deuce of clubs and proceeded to buy out Cooley. Later, Mormon settlers came in and bought the ranch from Huning.

There are some issues over the veracity of the second story and the first has more credence. Whichever story one chooses to believe the ownership, the name of the town and the name of the main street were all the result of a card game.

During the nation’s Bi-Centennial in 1976, also the 100th Anniversary of the famous card game, I was invited to Show Low to officiate a mayor election by dealing cards to the two candidates, a man and a woman. Whoever drew the deuce of clubs would the next mayor. I was dealing from a deck of fifty-two and concerned the game would go too long and thus bore the audience. I needn’t have worried as on the third deal the woman drew the deuce of clubs and became mayor. No contentious calls for a recount. Maybe we should elect all our politicians with a card game.