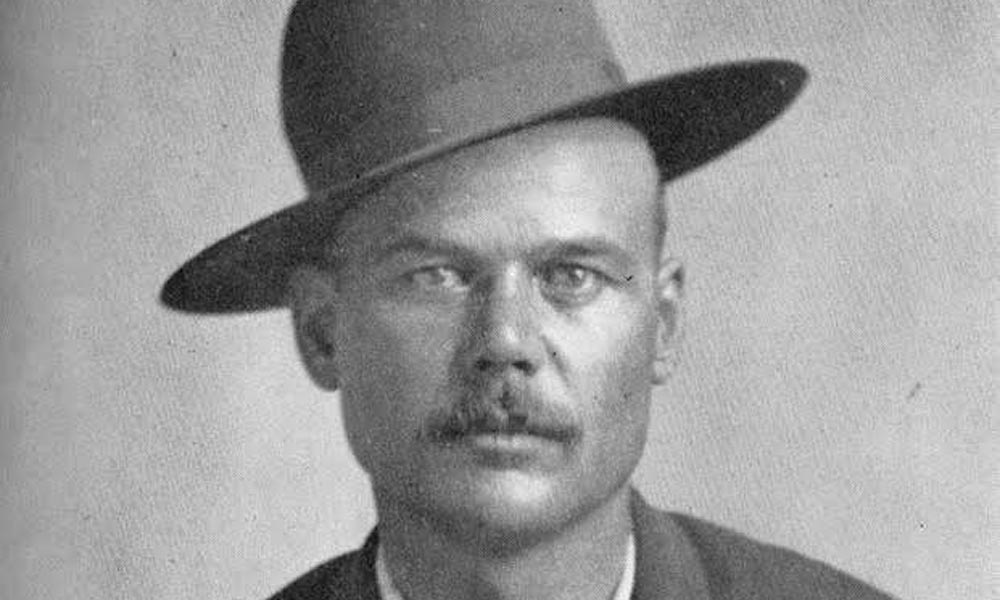 Burt Alvord was a big strapping, swarthy-looking fellow with a bald pate and an IQ that was said to be considerably less than the size of his waist, which was somewhere around forty. He did have a few positive attributes. He was usually cheerful, had a sense of humor and was a popular guy around Cochise County during the 1890s. He worked for a time as a deputy for Cochise County Sheriff John Slaughter. Rumor has it the sheriff said Burt didn’t know the meaning of the word “fear.” He went on to say he didn’t know the meaning of a lot of other words either.  Burt’s major interests seems to have been beer, poker, horses, guns and practical jokes.

One time he and a crony, Matt Burts, were visiting Bisbee where they sent a telegram to Tombstone announcing, “The bodies of Burts and Alvord will be arriving on the Bisbee stage this afternoon.”

Naturally, locals thought the pair had died in a gunfight. Many gathered in the local saloons to raise the glass and drink to a happy afterlife for the pair. A large delegation met the afternoon stage but sorrow turned to chagrin when the mischievous duo emerged from the stage grinning from ear to ear saying “Our bodies have arrived. We never go anywhere without ‘em.”

There’s always been a rivalry between rough and rowdy Tombstone and the “company town” of Bisbee. An enduring story is told that one day a big hairy-chested man from Bisbee walked into Tombstone leading a fierce-looking mountain lion on a leash. He walked into a saloon causing pandemonium as the patrons scattered through the doors and clamored out the windows.

“I thought you Tombstonians were tough,” he roared.

There was only one man left standing at the bar. He reached inside his shirt and pulled out a five-foot rattlesnake and tossed in on the floor in front of the interloper. Both the Bisbeeite and his mountain lion took off running and didn’t stop until they got back to Bisbee.

One time Burt and a plucky little Irishman named Biddy Doyle, an ex-soldier, ex-boxer, ex-wrestler and fellow-practical joker decided to relieve the good citizens of Bisbee of some of their hard-earned cash by staging a wrestling match. Boxing and wrestling were two of the most popular sports in the mining camps and there was always a lot of money in the purse for the winner.  This was to be no ordinary wrestling match. Burt and Biddy were planning to have the outcome determined beforehand.

Biddy made a reconnaissance trip over to Bisbee and found a local sharpie to act as promoter. They needed an opponent so he found a muscular and not-too-bright Cornish miner who worked in the Copper Queen Mine. He agreed to take the fall for a suitable stipend.

Before setting up the betting Biddy Doyle needed to find a suitable spot to stage the match. The only soft spot was the mule manure that was piled outside the entrance to the Copper Queen mine located at the foot of Tombstone Canyon.

In physical appearance the little Irishman was no match for the big “Cousin Jack” but Biddy talked a good game and soon the crowd was betting heavily……that the cocky little Irishman would lose. The odds quickly rose to 20 to one against Biddy. A large crowd of sporting men from Tombstone also showed up to place their bets.

Burt and Biddy stood to make a small fortune if things went according to plan. Yep, they had a plan however, it might have gone smoother had they’d rehearsed it a time or two beforehand.

Burt, knowing the fix was in, bet all their cash on Biddy to win.

On the day of the match a large crowd was gathered around the manure pile. Anticipation was building as the contestants were introduced. The match began with Doyle and the Cornishman warily stalking each other. Suddenly, Biddy maneuvered around behind his opponent, pulled him to the ground and pushed his face down in the manure. The big man meekly surrendered.

While the spectators were momentarily stunned, Burt grabbed the purse containing several hundred dollars and the two boys from Tombstone ran to their horses and scurried out of town in a cloud of dust.

While Burt and Biddy were bellied up to the bar in a saloon on Allen Street celebrating their marvelous prank on the folks in Bisbee, the local newspaper in Tombstone took issue and chastised their two “bad boys” for tarnishing the town’s good reputation.