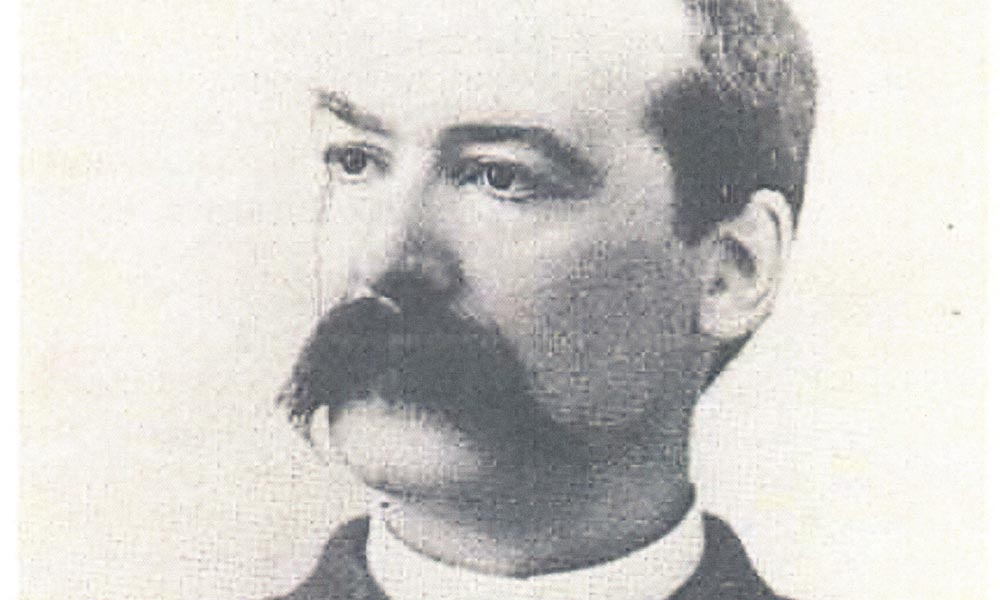 In 1901 a gang of outlaw operating in the wild, untamed country along the Arizona-New Mexico border was led by a former cowboy named Bill Smith. Hollywood and writers seems to have overlooked him and it could be the name “Bill Smith.” But Burt Mossman, captain of the newly-organized Arizona Rangers could attest that Smith was leader of meanest bunch of desperadoes as most who rode the Outlaw Trail that stretched from the Mexican border all the way to Wyoming.

Captain Mossman knew Smith about as well as anyone and according to him the outlaw chieftain had once been an honest cowpuncher but had gone bad. According to Mossman nobody seemed to know why Smith had turned his back on the law. Something he didn’t spurn however, was Smith retained his chivalrous cowboy code of honor.

He stood about six-feet tall with a slender, muscular frame with dark eyes and thick, coarse hair. The handsome outlaw was about 35-years old when he decided to turn outlaw. He gathered around him a band that included two brothers and four other shady characters. During the winter of 1900 the gang terrorized southwest New Mexico, holding up travelers and robbing stores. Brazenly they raided ranches and stole livestock in broad daylight. Their fame spread and before long they were being accused of every killing and foul deed that occurred in the territory.

Finally, in desperation the citizens of southwest New Mexico grew weary of the lawful efforts to apprehend the gang and formed a vigilance committee that numbered several hundred. New Mexico didn’t have a territorial ranger force until 1905.

The man-hunters were in the saddle constantly scouring the rugged country along the Arizona-New Mexico border. Their persistence finally paid off as the relentless pressure drove the outlaws into the rugged Blue River country in eastern Arizona where they set up a new base of operations.

When Captain Mossman got word the Smith gang was the territory he dispatched four Arizona Rangers to the White Mountain area. In early October, members of the gang were seen around Springerville. According to informants they had robbed a Union Pacific train in Utah and on their way back to the Blue River they’d stolen a bunch of horses.

Rangers Carlos Tafolla and Duane Hamblin of St. Johns, along with Apache County Sheriff’s Deputy, Will Maxwell and three others had gone out in pursuit.

Despite a raging snowstorm that buried the White Mountains in a think, white blanket Tafolla and Maxwell picked up the trail. Knowing they might lose the gang if they went back to get the rest of the posse, the two lawmen pressed on. They caught up to the gang in camp and were attempting to sneak up and get the drop on the unsuspecting outlaws when one of the horses snorted and turned its head in their direction. The outlaws reacted quickly and dove for cover.

The two lawmen found themselves caught out in the open looking down the rifle barrels of seven desperadoes not more than forty feet away. Tafolla who was known to be a cool hombre under pressure, called out: “Bill Smith, we arrest you in the name of the law and the Territory of Arizona and call upon you and your companions to lay down your arms.”

Those were brave words considering the odds but Ranger Tafolla was determined to play out his hand. Maybe he hoped Smith would think there was a larger force in the woods behind him. Smith and Tafolla and Smith were acquainted from their younger days as cowboys.

Smith replied:  “Tafolla, we know each other pretty well. We have spent many an hour of weary toil and hardship together. I liked you then and I like you now. For your sake and for the sake of your wife and babies, I would spare you now. I would also like to spare your companion. Give me the benefit of one day and I shall leave here and never trouble this country again. But do not try take me, for by God I will never be taken; neither I nor any member of my party.”

Undaunted, the Ranger glared at the outlaw chieftain:

“Bill, this friendship between you and me is a thing of the past. As for sparing our lives we may thank you for that and no more. For thirty days we’ve followed you, half-starved and half-frozen. Now we stand together or fall together. The only request I have is to make of you and make that for old time’s sake is: If Maxwell and I shall forfeit out lives here, you will send to Captain Mossman the news and manner of our death. Let him know that neither he, nor the other members of this force need feel ashamed of the manner in which we laid down our lives on this spot today.”

The knightly parley was over. A furious fusillade of gunfire echoed through that snowy basin and when the gunsmoke lifted, two brave lawmen lay dead in the snow. Tafolla and Maxwell were game to the end. Each had emptied their Winchesters before cashing in. Smith and one other suffered gunshot wounds.

Captain Mossman was at Solomanville when word arrived of the deaths of the two lawmen. He quickly raised a posse and recruited two Apache trackers from San Carlos. They picked up the trail and followed it until another blizzard obliterated the tracks.

Since the outlaws were the only survivors that day and made their getaway, how did Mossman learn the details of the battle and the chivalrous manner in which Tafolla and Maxwell died. Bill Smith had turned his back on society, becoming one of the most ruthless desperadoes of his time. Yet, in spite of that he maintained an honorable code that bonded men of the Old West.

True to his word, Bill Smith wrote a letter to Captain Mossman detailing those last brief moments in the lives of two brave lawmen.

I think Hollywood let a good story get away.

Carlos Tafolla was one of only two Arizona Rangers to die in the line of duty. The names of he and Ranger Jeff Kidder, who was killed in 1908, are carved on the walls of the Arizona Peace Officer Monument at the Arizona State Capitol in Phoenix.

The outlaw Bill Smith was never apprehended and his fate is unknown.