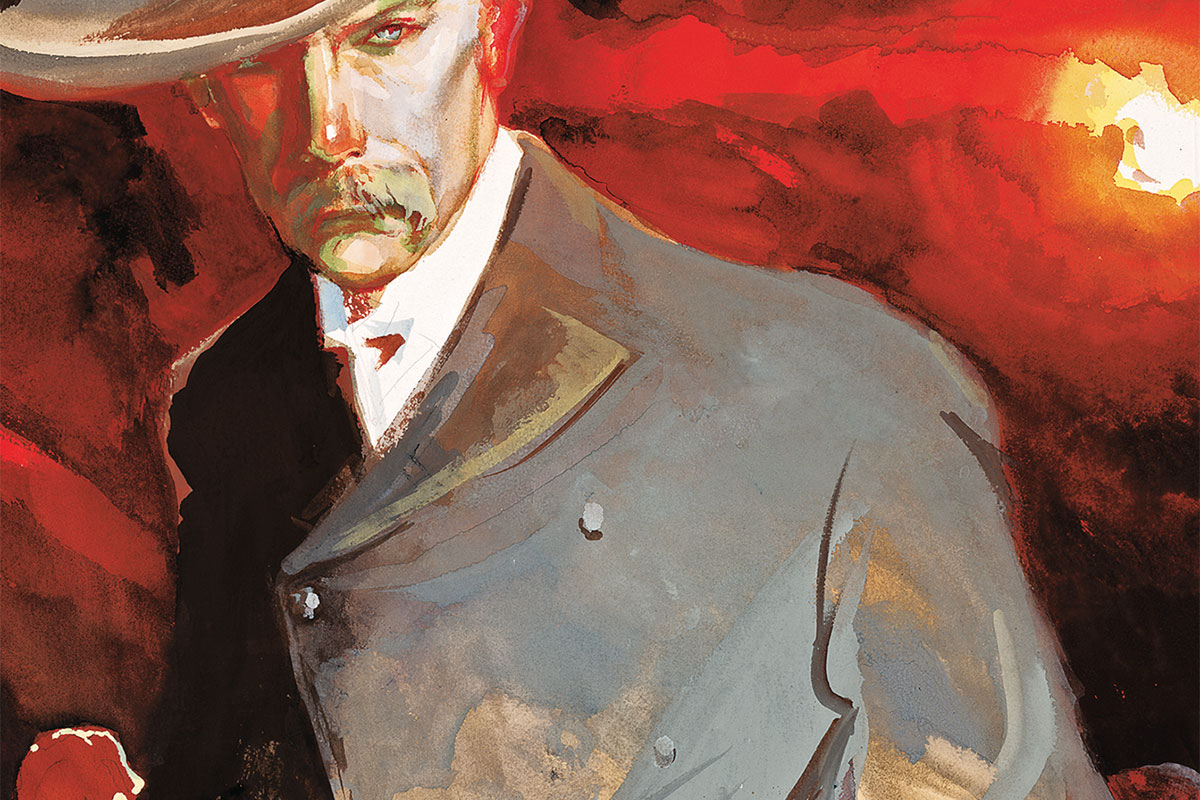 Eddie Foy is performing at the Comique Theatre in Dodge City, Kansas. In the packed house are Bat Masterson and Doc Holliday. Wyatt Earp is on duty as assistant town marshal, but he posts himself in front of the theater to hear Foy’s act.

In his autobiography, Clowning Through Life, Foy recalled that night:

“It had come to be one of my jobs to call the figures for the old-time square dances which were the favorites at Dodge—‘All balance left! Swing the right hand lady! Alamon right!’—whatever that may mean; I don’t know to this day—and at intervals of twenty minutes or so, ‘Balance all to the bar!’—a broad suggestion to everybody to buy a drink. We were going merrily on with the dance when suddenly, Bang! Bang! Bang! came a roar of eight or ten big pistols from the outer darkness, the crash of glass from our windows and shrieks from the women.

“Everybody dropped to the floor at once, according to custom. Bat Masterson was just in the act of dealing in a game of Spanish monte with Doc Holliday, and I was impressed by the instantaneous manner in which they flattened out like pancakes on the floor. I had thought I was pretty agile myself, but those fellows had me beaten by seconds at that trick.”

It was sometime during this period that the defining moment between Doc Holliday and Wyatt Earp happened. Wyatt remembered that, “It wasn’t long after I returned to Dodge City that his [Holliday’s] quickness saved my life. He saw a man draw on me behind my back. ‘Look out, Wyatt!’ he shouted, but while the words were coming out of his mouth he had jerked his pistol out of his pocket and shot the other fellow before the latter could fire.

“On such incidents as that are built the friendships of the frontier.”

Stuart Lake’s book has Wyatt being held at bay by a hoard of woolly Texans. Critical historians have doubted the incident occurr ed because Lake’s hyperbolic account wasn’t validated by the papers. However, an item in the August 20, 1878, Globe may be a garbled account of the incident:

“It appears that one of the cowboys, becoming intoxicated and quarrelsome, undertook to take possession of the bar in the Comique. To this the barkeeper objected and a row ensued. Several cattle men then engaged in the brawl and in the excitement some of them were bruised on the head with six-shooters. Several shots were accidentally fired which created general confusion among the crowd of persons present. We are glad to chronicle the fact that none were seriously hurt and nobody shot.”

On August 17, 1878, Wyatt along with Jim Masterson bruise a few Texas heads with their six-shooters, again at the Comique Theatre. The Globe newspaper is not appreciative of the officer’s efforts” “We…cannot help but regret the too ready use of pistols in all rows of such character and would like to see a greater spirit of harmony exist between our officers and cattlmen…”

The newspaper knew which side its bread was buttered on.

In February of 1878, Ed Schieffelin and Richard Gird locate the “Graveyard” mine and discover a lode that assays $15,000 to the ton and immediately name the mine, “The Lucky Cuss.”

By the middle of 1879 Dodge City has lost its zip and the Earps and Holliday head west. Doc lands in Las Vegas, New Mexico Territory, where later he and Kate are picked up by Wyatt, his brother James and and their family wagon train en route to pick up Virgil and Allie Earp in Prescott, Arizona Territory.

On November 1, 1879, several wagons and fifteen head of thoroughbred horses reach Prescott. Wyatt convinces Virgil to sell his sawmill and quit his job as deputy sheriff to join the new family venture. Doc is with Kate Elder and the two stay behind as the Earps go on to the new mining mecca in southern Arizona—Tombstone.

On November 29, 1879 the Earp wagon train arrives in Tombstone. Every house is taken so the Earps rent a one-bedroom adobe on Allen Street. It has no floor, just hard packed earth, and rents for $40 a month.

Legend says Doc and Kate stayed behind in Prescott because Doc got on a lucky streak at the gaming tables. According to Kate, “Doc received a letter from Wyatt Earp stating that Tombstone was very lively and that Doc could do well there, as there was no dentist there.” Doc and Kate head for the boomtown but Kate leaves Doc at Gillette saying, “If you are going to tie yourselves to the Earp brothers…I am going to Globe.” She did.