Fact Vs. Fiction: The Truth about the Calamitous Martha Jane Canary 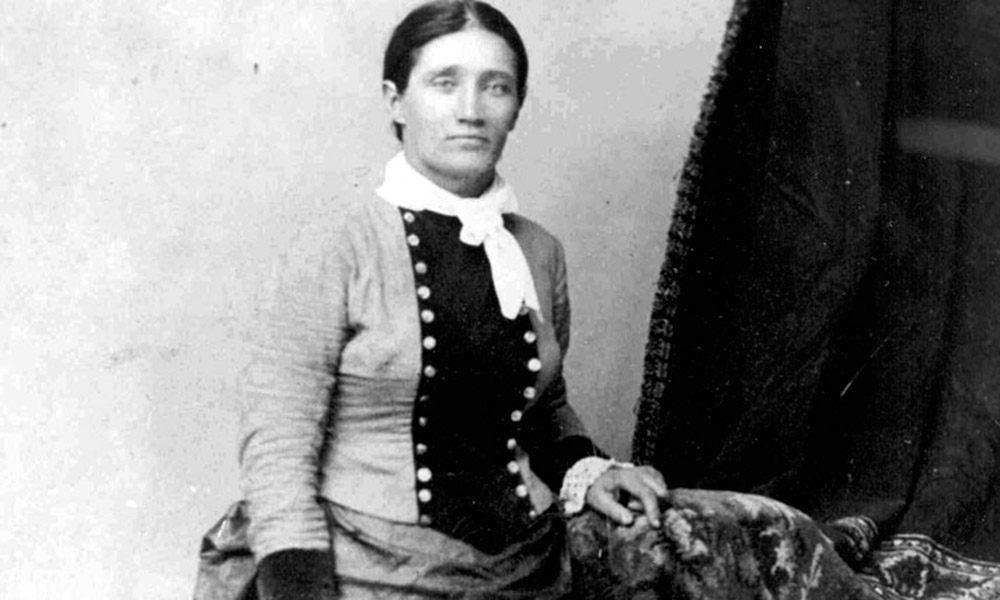 Recently I was scrolling through my photo files and ran across a photo of Miss Doris Day from her 1953 musical hit, Calamity Jane and thus inspired, I pulled up a story I’d written several years ago on Martha Jane. Turns out I should have looked at the notes I took a few years later when James McLaird, author of Calamity Jane, The Woman and the Legend, gave a talk at a Wild West History Association Roundup.

An e-mail from Richard Etulain, award-winning Professor of History at the University of New Mexico and author of The Life and Legends of Calamity Jane, inspired me to get to the truth about Miss Martha Jane Canary.  It was the “Golden Age of Prevarication” and she was such a master at putting a spin on her life that it’s difficult to separate fact from fiction. Martha also had a lot of help from other yarnspinners.

I’ve spent nearly fifty years striving to separate fact from fiction as much of which was created by writers in the first half of the twentieth century who relied solely on the claims of old white-whiskered embellishers and fabricators who passed off their yarns as truth.

There is an old adage that historians like to ruin a good story. However the bottom line for us is always “get the story right.” Often times the truth can be better than fiction. That’s not the case with Martha Jane Canary. Here now, thanks to authors Dick Etulain and the late David McLaird, are the true facts about the Calamitous Martha Jane.

Martha was born in the spring of 1856 or near Princeton, Missouri. In 1864 the family moved to Montana. Her mother, Charlotte died when she was nine or ten. Her father, Robert, then took his children to Utah where he died the following year leaving six orphans.

Contrary to legend, after her parents died she did not raise her five siblings. And, there’s no evidence that 1866 young Martha, at the tender age of ten or eleven, was working in a brothel called the Bird Cage in Blackfoot City, Montana. No evidence has been found that such an establishment even existed.

It’s assumed all the children were adopted, including Martha. There are several versions of what happened to her after her father died. She might have been cared for by a family named Alton at Ft. Bridger until she was fourteen. In all likelihood she then joined the camp followers residing in the settlements along the new Union Pacific Railroad or the hog ranches near the military posts.

Although she might have been a bull-whacking freighter a few times, she never was a scout, Indian fighter, stagecoach driver and legendary nurse during frequent small pox epidemics. She never appeared in Buffalo Bill Cody’s Wild West show but in 1896 she did travel with the Kohl and Middleton dime museum for about six months.

She didn’t always wear men’s clothing but usually wore a dress.  Her nursing experience was exaggerated, however she was known as a tender and caring person for the sick and the needy. She worked as a cook, laundress, and waitress and in her younger years, was a popular dance hall girl and a prostitute. Martha was an alcoholic and when she in her cups she was hell on wheels.

Her name was Martha Canary and Jane was a nickname.  There are lots of tales about how she became Calamity Jane but it’s really quite simple. She was charismatic, colorful and everywhere Martha went she drew a crowd. She was a calamity and her whole life was calamitous. As a journalist would say, she was “good copy.”

There were other Calamity Jane’s. Like Buffalo Bill and Wild Bill, it was a popular nickname but she was the Calamity Jane who drew all the attention from the press. Her boisterous behavior always put her in the spotlight.

Martha had at least two formal marriages and several “marriages” or liaisons. She had a son that she named, Little Calamity, who died in infancy and daughter, Jessie Oakes. In contrast to her wild and unsettled ways she loved and actually tried to be a good mother.

She failed at several businesses including restaurants and brothels always because of her excessive drinking.

The legend of Calamity Jane began in 1875 when she was a nineteen-year-old camp follower with the government sponsored Jenny-Norton expedition consisting of geologists and 400 soldiers to the Black Hills to verify Custer’s report of gold a year earlier.

Martha was wearing men’s clothing when a photographer took her picture.  She got caught and had they not been out in the middle of nowhere she would have been sent packing. Army scout, Captain Jack Crawford wrote a poem about her and in his dispatches then sent it to the Chicago newspapers.

A year later she returned to the Black Hills with Wild Bill Hickok, Charlie Utter and a wagon load of whores.

Horatio McGuire wrote a colorful biography of her in his 1877 promotional booklet on the Black Hills claiming she was a scout for General Crook.  That gave impetus to her career that led Edward Wheeler to include her in his Deadwood Dick dime novel series.  Wheeler created a fictional character named Deadwood Dick and made him sidekicks with Calamity Jane and readers assumed the tales were true. Keep in mind this reflected the frontier exaggerations that typified the frontier during the 19th century. She became an instant frontier legend and a dime novel heroine was born.

The 30-plus dime novels published about her in the Deadwood Dick series from 1877 to 1885 did more to bring her into national limelight than the fake stories about her and Hickok.

She would publish her own imaginary achievements in 1896. Despite a few exaggerations such as being a scout, rescuing the Deadwood stage, capturing Jack McCall, the man who killed Wild Bill and being a mail carrier in the Black Hills her narrative is rather modest and ordinary.

There have been attempts, especially in the movies to link her romantically with Hickok and the fastidious gunfighter did enjoy keeping company with fun-loving trollops. Perhaps if she looked more like Doris Day, Yvonne de Carlo, Jane Russell, Ellen Barkin, Jane Alexander or Jean Arthur, the actresses who played her in the movies Wild Bill might have made himself available.

By 1901 although the booze and hard life was taking its toll on her Martha still had star power. That summer she joined Colonel Fred Cummins Indian Congress that was performing at the Pan American Exposition in Buffalo, New York. With 100,000 people in attendance she rode in the Midway Parade with the notorious Apache warrior Geronimo and during her performances the crowds loved her. According to local newspaper reports she was a major asset for the western show.

Friends did their best to keep her away from the whiskey. When she was sober Martha mixed and handled herself well socially. But the East didn’t suit her and she longed to return to her beloved West. Buffalo Bill’s Wild West show was also appearing at the exposition and he is supposed to have bought her a train ticket and given her some money. She went on a binge in Chicago and must have squandered it because she had to borrow more to get home.

That same summer, on September 6th, President William McKinley was visiting the exposition when he was assassinated by a crazed anarchist named Leon Czolgosz.

In early 1903 Martha was living in Belle Fourche just north of the Black Hills where she took a job at Madam Dora Du Fron’s bordello working as a cook and laundress.

Martha died at the age of forty-seven in Terry on August 1st, 1903 and the next day she was taken to Deadwood for burial. Some observers noted she looked more like seventy-four than forty-seven. Her funeral was the largest ever held for a woman in Deadwood. Her last request was to be buried next to Wild Bill at the Mount Moriah Cemetery and that’s where she lies.

When she died a headline in the Gardner, Montana newspaper, callously declared: “Calamity Jane Finally Does the Proper Thing.”

People often question the fact that since Billy the Kid never robbed a train or bank; never held up a stagecoach; why is he such a famous outlaw? The same could be said of Calamity Jane. McLaird writes, “Her career, in fact, may be the best case study of legend-making in the history of the American West simply because there was so little on which to build; she arrested no outlaws, robbed no banks and killed no Indians.”

Another old adage says, people love heroes and if they don’t have em, they make em up.