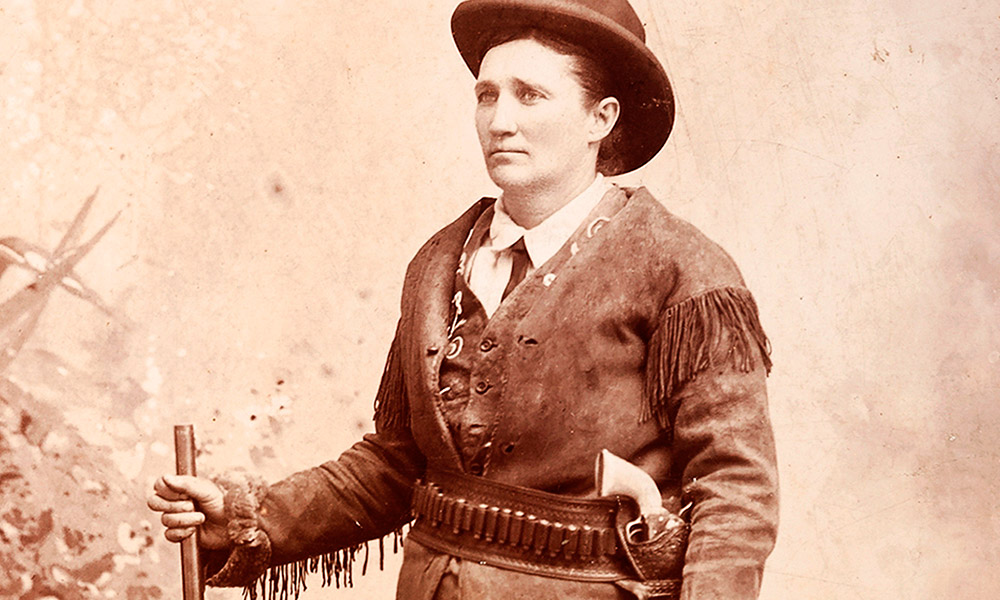 Thanks to Hollywood, Martha Jane Canary’s story has come down to us in a somewhat romantic version.  Army scout, Indian fighter and barroom brawler.

The beautiful actress-singer Doris Day played her in the lighthearted 1953 musical, Calamity Jane.  Jane was hardly the Western beauty of latter-day legend. One contemporary described her rather shapeless body as resembling, “a busted bale of hay.”

In reality, Jane was big-hearted, generous, the hero in a dreaded small pox epidemic in Deadwood and was generally well-liked despite her wild and wicked ways. She was also an excellent marksman and a daredevil horsewoman. In a word she was colorful.

Many stories are told of how she got her name. Jane claimed it came after she made a daring rescue of an Army officer during an Indian attack but the most believe it resulted from the fact that her paramours were visited soon after with some venereal calamity.

By the time she was twelve Jane was orphaned and became head of the house, raising six siblings. She was physically strong and able to perform men’s work for better wages. The only thing that paid better for a woman was prostitution and she dabbled in that too.

She did love men, but as time went on she switched her affections to booze. By the time she was twenty-four Jane was an alcoholic and could out-cuss, out-shoot, out-shout and out-drink most men.

Kitty O’Leary, aka Madame Bulldog, was 190 pounds of wildcat fury and muscle.  Built like an elephant, she was the madam, head bouncer and proprietor of the Bucket of Blood Saloon in Livingston, Montana. The Bulldog took offense at Jane’s language one day, picked her up and bodily threw her out in the street.

It is likely Martha Jane’s mother was a prostitute and Jane began working at the Bird Cage in Blackfoot, Montana when she was only thirteen.  At twenty she made a cowboy crooner named Darling Bob Mackay dance about like a tenderfoot by firing bullets at his feet in a Dodge City Saloon.  An excellent marksman Jane was carful not to injure the poor Darling Bob.

The trouble started when Mackay had the temerity to say something indelicate about her underwear.

She was anybody’s for the price of a drink.  Greedy showmen hired her for appearances in dime museums.  Her ghost-written and embellished memoirs were printed as a cheap pamphlet which she hawked for whatever she could get.

Her place in history is assured thanks to her attachment to Wild Bill Hickok.  But Bill was a fastidious sort who did enjoy the company of barroom trollops but he drew the line when it came to consorting with such a notorious floozy as Jane.

Historians have never been able to track down her daughter. A women claiming to be the daughter of her and Wild Bill surfaced but there’s no evidence the pair were ever lovers. They probably know each other and might have even had drink together.

In 1895 the aging Jane appeared as a sharpshooter riding astraddle her horse in Buffalo Bill’s Wild West show. In 1901 she appeared at the Pan American Exposition in Buffalo, New York but she got drunk one night, shot up a saloon, made some Irish policemen dance a jig with her pistol and got fired.

Eventually the hard life took its toll and by the summer of 1903 Jane was working as a cook and laundress in a whorehouse in Belle Fourche, North Dakota. She died at the age of fifty-one on August 2nd, 1903. Her funeral was largest ever held for a woman in Deadwood. Her last request was to be buried next to Wild Bill at the Mount Moriah Cemetery and that’s where she lies.