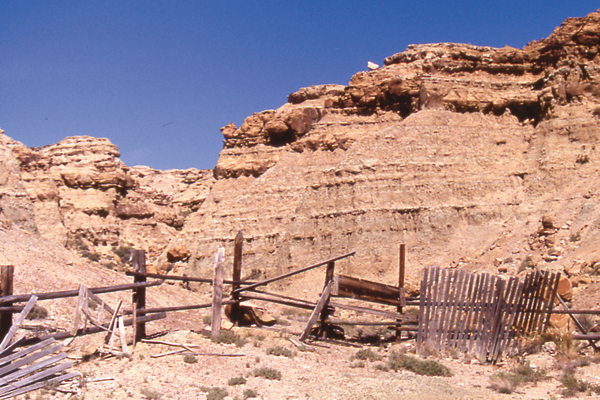 I’m driving around Wichita, Kansas, looking for the Arkansas River and I can’t find it.

That is probably because I’m pronouncing it like the state of Arkansas (with a “saw” at the end) and I find out the people around Kansas pronounce it like their state. Now that I know how to say the river’s name in this region, I finally spot it, after taking the time to see some of the Wichita sites like the re-created frontier community of Cowtown and the Wichita Indian Center, but the river runs slowly here so I head upstream.

I soon find myself in Yoder, Kansas. You will have to slow down in this Amish and Mennonite community because you’ll be sharing the road with horse-drawn carriages or women pulling Radio Flyer wagons filled with children or goods they either intend to sell/trade in town or that they bought/traded for in town (the goods, not the children). The Yoder hardware store has a hitching rail on one side, and the shelves are lined with lanterns, crockery and Radio Flyer wagons. Across the street you can purchase dolls or doilies, and another business sells meat, cheese and other food items. Not far away is Yoder Wood Products, with handcrafted furniture ranging from beds to bureaus.

The river flows slowly past Hutchinson, Kansas, a sprawling city with an interesting array of antiques in downtown stores. This is home to the Kansas State Fair, held each September, and the Dillon Nature Center, open year-round. Following Highway 96 west of Hutchinson, I am attracted by the sign to Hedrick’s Exotic Animal Farm. Okay, I admit, the camels, ostriches and zebras caught my eye, too. I wheel in to find a bed and breakfast lodge complete with kangaroos, water buffalo and other critters. I help feed the giraffes, pet the baby white camel and leave smelling like I’d been in a barnyard, which of course I had.

After I leave Hutchinson, the river makes a bend toward the west and I feel more at home—or at least headed that way. I know that the Arkansas (by any pronunciation) was a major marker by which early travelers reckoned. Coronado rode along it in the 1540s when he sought Quivira, reaching a point east of Ellinwood, Kansas. Zebulon Pike traveled along the river on his explorations of the
area in 1806. After 1821, traders between Atchinson, Kansas, and Santa Fe, New Mexico, followed it while using the Santa Fe Trail as a road of commerce between two nations.

Frontier Posts Along the Arkansas

Just west of Larned, Kansas, I stop at the Santa Fe Trail Center to view its collection of pioneer-era buildings, including a one-room schoolhouse, railroad depot and re-created dugout and sod house, but the real attraction in this neck of the woods (yes, indeed, this part of Kansas has a few woods) is Fort Larned.

Named for Benjamin F. Larned, paymaster-general for the U.S. Army, Fort Larned was moved to this site on the Pawnee Fork of the Arkansas River in 1859. Captain Henry W. Wessels, Company C, Second Infantry, served as the initial post commander, dealing with Kiowa, Kiowa-Apache, Comanche, Arapaho and Southern Cheyennes. At its former location a few miles east, Fort Larned served Santa Fe Trail traffic. At the new site, it became the dominant military post in this area of Kansas, and under the 1861 Fort Wise Treaty, served as the agency for Indians in the region.

When treaty negotiations took place in South Central Kansas that led to the Medicine Lodge Treaty of 1867, a large amount of gifts and provisions for the Indians were transported from Fort Larned. Today, Fort Larned is one of the best preserved Indian War-era forts anywhere, and it is operated by the National Park Service, with re-enactors often on hand to give you the feeling you have stepped back in time.

The river seems not much more than a large creek near Larned, having been drawn down by irrigation and other uses in this area and upstream, so I continue west into Colorado and make my way to the second important frontier-era post along the Arkansas: Bent’s Fort.

St. Louis fur trapper and trader William Bent and his brother Charles had independent trading ventures on the Santa Fe Trail before they joined with Céran St. Vrain (who had first traveled the Santa Fe Trail in 1824) to form the Bent, St. Vrain Company in 1831. The company quickly became involved in a commercial trade enterprise covering thousands of square miles in present-day Colorado, New Mexico, Arizona, Kansas, Nebraska, Oklahoma, Texas, Utah and Wyoming. The partners started with a trading house in Taos, New Mexico, and William Bent oversaw construction of the Bent, St. Vrain Company adobe fort on the Arkansas River in 1833.

In 1847, Englishman George Frederick Ruxton described the fort: “Bent’s Fort is situated on the left or northern bank of the river Arkansa, about one hundred miles from the foot of the Rocky Mountains—on a low and level bluff of the prairie which here slopes gradually to the water’s edge. The walls are built entirely of adobes—or sun-burned bricks—in the form of a hollow square, at two corners of which are circular flanking towers of the same material. The entrance is by a large gateway into the square, round which are the rooms occupied by traders and employees of the host. They are small in size, with walls colored by a white-wash made of clay found in the prairie. Their flat roofs are defended along the exterior by parapets of adobe, to serve as a cover to marksmen firing from the top…. In the centre of the square is the press for packing the furs; and there are three large rooms, one used as a store and magazine, another as a council-room, where the Indians assemble for their ‘talks.’ Whilst the third is the common dining-hall.”

The adobe fort had a ready trade market with the Cheyennes because William Bent had married Owl Woman so it took little time for the Bent, St. Vrain Company to dominate trade in the Upper Arkansas Valley.

William scouted for Stephen Watts Kearny in 1846 as the latter made his way along the Arkansas River to Santa Fe for the beginning of the Mexican-American War. After Kearny took Santa Fe without firing a shot, Charles Bent became governor of New Mexico. His rule was short-lived, however. Indians killed him in 1847 when they revolted in Taos. Two years later, William Bent abandoned Bent’s Fort and blew it up. Today, the fort has been re-created and is operated by the National Park Service.

In July 1806, Lt. Zebulon Pike (who was promoted to captain while on his mission) followed the Arkansas through this area. On November 15, from camp on the Purgatoire River, a mile upstream from its confluence with the Arkansas River, Pike first saw the Rocky Mountains and the peak that now carries his name. He wrote: “At two o’clock in the afternoon I thought I could distinguish a mountain to our right, which appeared like a small blue cloud … When our small party arrived on the hill they with one accord gave three cheers to the Mexican mountains.”

By Friday, November 21, 1806, Pike and his men were west of Rocky Ford, a place named because it was a good place to ford the Arkansas River. It’s now known for its cantaloupe. I can’t resist the roadside stand, so I stop to buy a melon, which serves as a fine lunch.

As Pike traveled west of this area, he met a war party of Grand Pawnees and gave them “a carrot of tobacco, one dozen knives, 60 fire steels and 60 flints.” But then the Indians “demanded ammunition, corn, blankets, kettles &c all of which they were refused.” This caused the Indians to become more aggressive and Pike to order “my men to take their arms, and separate themselves.” He avoided an armed conflict, but the Indians took a sword, tomahawk, broad axe, five canteens and other small items from Pike’s party.

The following day, Pike and his men reached the site that is now Pueblo and built a defensive area of logs, recognized as the first structure ever built by Americans in Colorado. Pike continued exploring to the west and north, circling around the mountain that now bears his name. On Thursday, November 27, he wrote: “The summit of the Grand Peak [Pikes Peak] which was entirely bare of vegetation and covered with snow, now appeared at the distance of 15 or 16 miles from us, and as high again as what we have ascended, and would have taken a whole day’s march to have arrived at its base, when I believe no human being could have ascended to its pinical [pinnacle]. This with the condition of my soldiers, who had only light overalls on, and no stockings, and every way ill provided to endure the inclemency of the region; the bad prospect of killing anything to subsist on, with the further detention of two or three days, which it must occasion, determined us to return.”

Pike’s party turned southwest, passing the Royal Gorge of the Arkansas River on December 5, before finally establishing a stockade at a camping place in Mexican territory some five miles from present-day Alamosa, Colorado, where he was later taken into custody and force-marched to Santa Fe.

The Heart of the Rockies

I avoid such diversions and continue following the Arkansas. In Pueblo, I visit the re-created El Pueblo, an early trading center, and then wander the Historic Arkansas Riverwalk, with its parklike setting and river tour boats. West of Pueblo, the river becomes clearer, swifter, more powerful. Over eons, it cut through solid granite to create the Royal Gorge, a 1,000-foot canyon that can be viewed from above on the Royal Gorge Bridge, or from below by taking a ride on the Royal Gorge Route Railroad. West of the gorge, the Arkansas turns north and slices through the valley from Salida through Buena Vista, turning to whitewater near its headwaters at Leadville. All through this beautiful valley, with the massive Collegiate Peaks soaring to the west, the Arkansas is popular for river rafters and kayakers. Here in the heart of the Rockies, I end my journey along the Arkansas, confident that as long as the 14,000-foot peaks here remain snowcapped, the Arkansas will continue flowing to Wichita.

Candy Moulton has two new books due out soon: Frontier & Military Sites of Colorado, forthcoming from Barbed Wire Publishing, and Chief Joseph: Guardian of the People in the American Heroes series being published in March by Forge.