The Heyday of Train Robberies 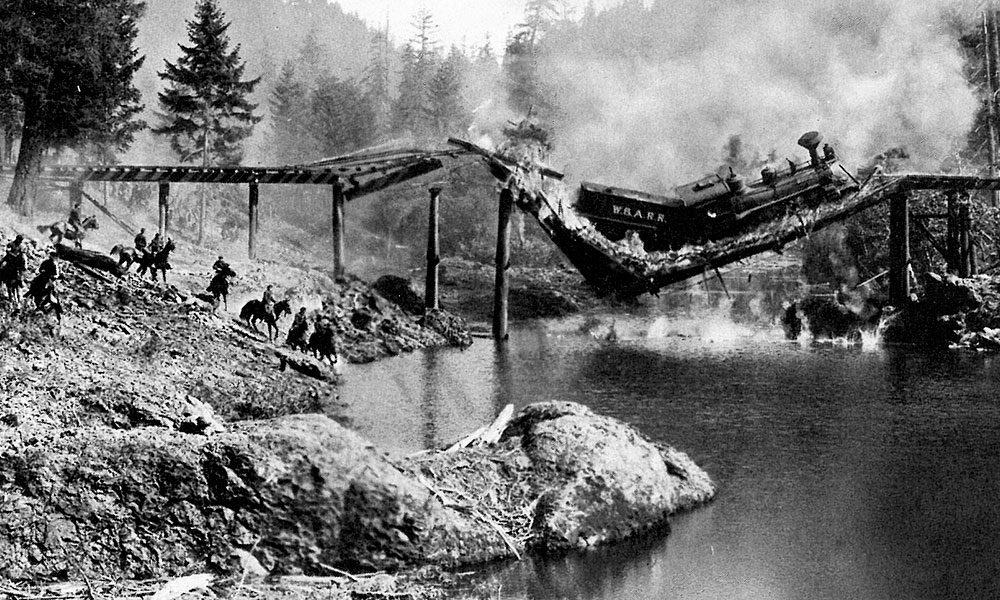 The 1890s saw an epidemic of train robberies with 261 in that decade alone. Eighty-eight people were killed and eighty-six wounded.

According experts there should not be less than five men to pull a successful train robbery. One to hold the horses and one on each side of the train to fire at any passenger who might try to interfere. Two outlaws took control of the engine, order the engineer to the express car and direct him to order the messenger open the door. They usually had a couple of sticks of dynamite just in case the messenger wouldn’t co-operate.

Attempting to rob a train by hot pursuit on horseback was rare. That’s Hollywood stuff and they do it because audiences prefer it that way.

The best and most common ways to rob a train was to board it at a station and work your way up to the engine; or sneak on board when the train was taking on water, then get the drop on the engineer. Another way was to pick a spot where the train was moving up a slope.

In each case, you would order the engineer to stop at a pre-arranged spot where your comrades were waiting.

Highwaymen got around that by waiting for the trains to pass over into the Arizona Territory before making their heist. The rash of train robberies thrust upon them by their neighbors to the east brought a quick reaction from the politicos in Arizona and two years later they too made train robbery a hanging offense.

After the death penalty for train robbery became law in Arizona in 1891 juries were reluctant to find an outlaw guilty of train robbery if no one was killed. Only one man, Black Jack Ketchum was actually hanged for train robbery.  He met his maker on April 25th, 1901 on the scaffold at Clayton, New Mexico.