Hugh O’Brian: Brave, Courageous And More Than A Little Bold 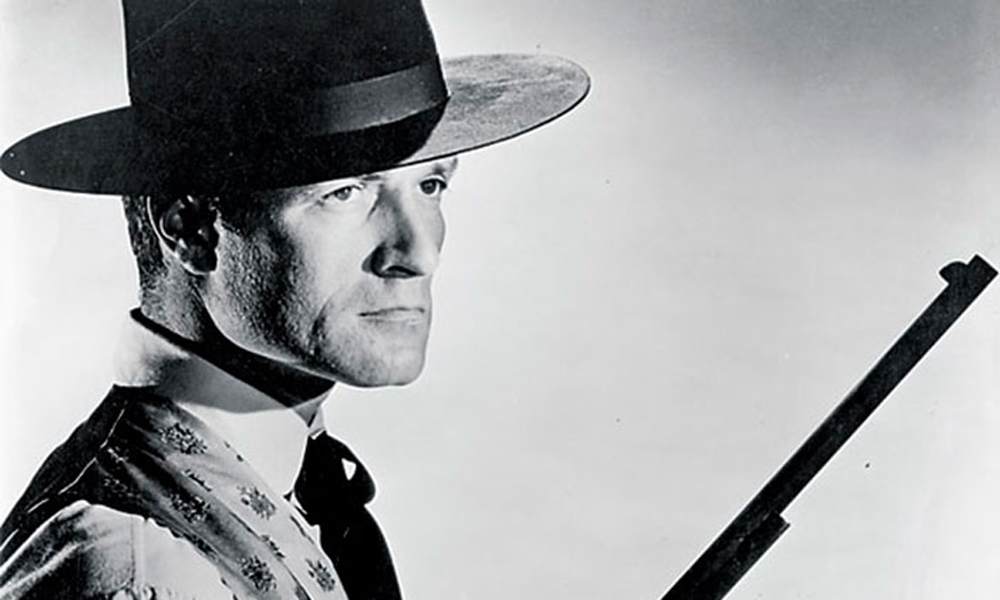 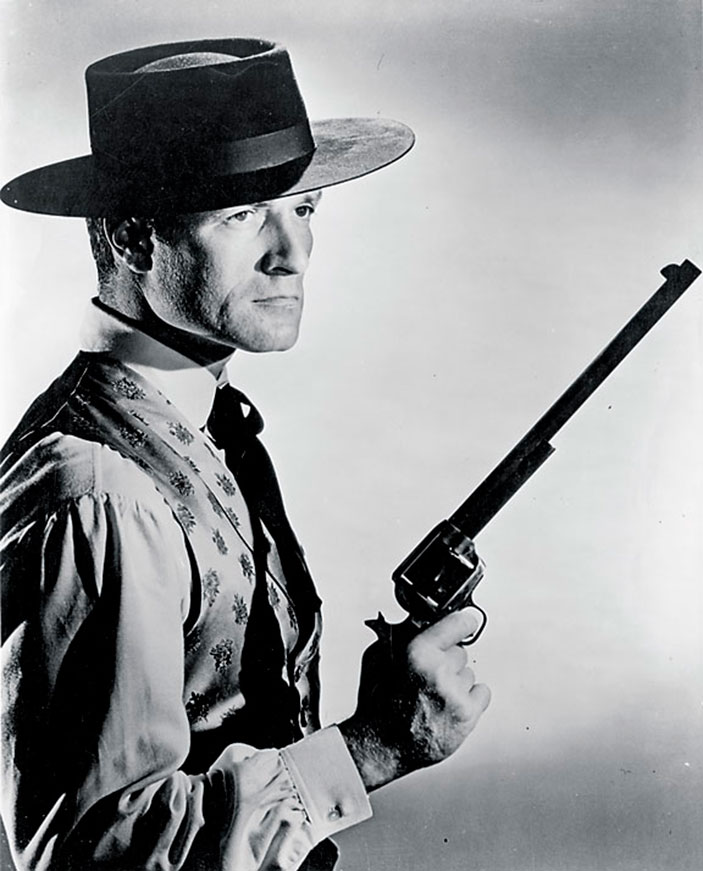 Actor, movie star, humanitarian and world-class cut-up, Hugh O’Brian died this morning at age 91. O’Brian, who had several health issues, died with his wife, Virginia, nearby at their Beverly Hills home, his publicist Harlan Boll says.

Ironically, the show he was most famous for, The Life and Legend of Wyatt Earp, premiered on ABC 61 years ago, on this date, September 6.

The show was billed as “TV’s first adult Western.” Asked to define “adult Western,” O’Brian once quipped, “The cowboy still kisses his horse—but worries about it.”

O’Brian got the role as the legendary Wyatt Earp from Stuart Lake! “I was one of about twenty people who were up for the lead role,” O’Brian remembered in  2014. “Stuart Lake, the man who wrote Wyatt Earp’s biography back in 1929, interviewed me for the part. I think he favored me for a couple of different reasons. First, he felt that there were certain physical similarities such as bone structure and height. I also think he took to me because he had been a marine and he felt that my background as a Marine Drill Instructor would add to the character.”

He lost a good part of his hearing during the filming of the Wyatt Earp series because, as he put it, “In order to preserve authenticity, I insisted on using full loads on the set so that my gun would fire at the proper volume while filming. All rifles and pistols in movies and
television use quarter loads, which release only 25 percent of the volume of full loads. The crew let me shoot my authentic guns, and whenever I fired, they wore earplugs to bear the big explosions. I couldn’t wear earplugs or put cotton in my ears because I was in front of the camera, and although I’m glad I used full loads, I am now paying for it because I lost a lot of  my hearing during those years filming Wyatt Earp.”

Before he became an actor, O’Brian had a successful landscape business in Hollywood. He mowed Wallace Beery’s lawn, and also Rosalind Russell’s and Gene Kelly’s lawns as well. Later, when he met Kelly on the set of Singin’ in the Rain, they went to lunch with costar Debbie Reynolds. Fifteen minutes into the meal, Kelly asked, “Hugh, I know you from somewhere, I’ve seen you before. How do I know you? “Well, sir,” O’Brian replied, “I do your lawn.”

An old-school, square-jawed specimen of manhood, O’Brian was a lifelong bachelor—until the age of 81, when he married for the first and only time. During the run of a play in Chicago, O’Brian spent five months as a guest of Hugh Hefner in the Playboy Mansion in the “red room,” which he recalled fondly, “was next to the kitchen.” As for his housemates, O’Brian remembered, tactfully,  “Of course, the gals who stayed at the mansion were very beautiful, and it was nice to have one or two of them offer to help me straighten my room every day.”

Like so many of our pioneers, O’Brian traveled West to make a name for himself. Born Hugh Krampe in Rochester, New York, on April 19, 1925, he enlisted in the U.S. Marine Corps in 1943 and ended up in California, San Diego to be exact, as a drill instructor. The rest, as they say, is history. 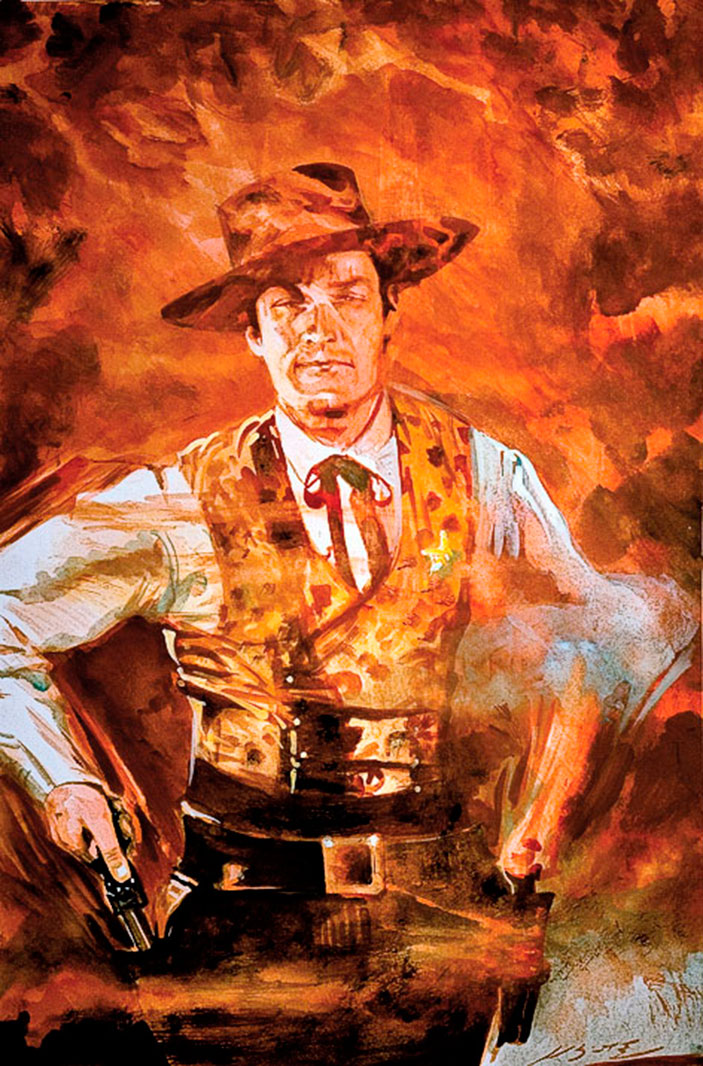 I had the good fortune of meeting O’Brian after I painted Hugh O’Brian in Smoke for an event at End of Trail in New Mexico in 2006. When I went on stage to unveil the painting, O’Brian took a look at it and said very loudly, “Where’s my cut!” He was quite brash and, might I add, bold, in that way. In spite of the dust up—I gave him my proceeds from my painting—we became friends.

O’Brian used to call me here at True West magazine about once a week and regale me with stories about Hollywood, Wyatt Earp, all the while bending my ear about doing a story on him.  He could be persuasive, and I must admit we obliged him more than once. Here’s Henry Cabot Beck’s excellent interview with the actor.

Hugh even invited me to his annual birthday bash at his Benedict Canyon mansion. In 2011, I took my daughter and her fiance along for the thrill of seeing his wonderful home and his legendary neighbors (Debbie Reynolds dropped by and charmed everyone  present) and his gracious wife, Virginia.

Most people don’t know, but O’Brian lost millions of dollars from an embezzling accountant and had to essentially start over in his 60s. He survived and thrived because life could not keep him down.

Not bad for a former lawn mower.