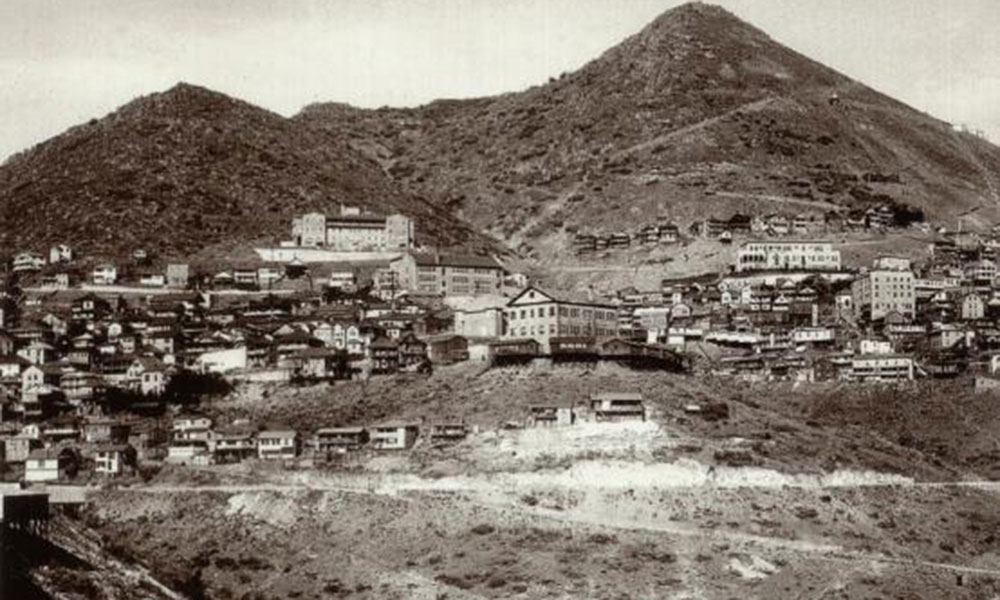 Jerome, perched precariously on the slopes of cone-shaped Cleopatra Hill is a popular tourist attraction today. Despite some occasional bickering between aged hippies who live there and geriatric motorcycle jockeys who roar up and down the hill it’s a quiet community. That’s a far cry from those halcyon days around the turn of the twentieth century when there was roughly one saloon for every one hundred residents.

Rich outcroppings of gold, silver and copper were found in the 1870s and the town sprung up almost overnight but it’s glory days began with the age of electricity and the demand for copper. It was named for a New York banker named Eugene Jerome, who never bothered to visit. He put up funds with the stipulation the town be named for him. Mr. Jerome incidentally, was a cousin to Ms. Jennie Jerome, the mother of Sir Winston Churchill.

Jerome was built with ramshackle buildings on slopes so steep you could spit a load of tobacco juice off your front porch and it would land on your neighbor’s head. Locals claimed mothers had to tether their small children to the house lest they fall into somebody else’s yard.

The town took on quite a personality during those years. Payday came once a month and the mines closed down for a couple of days to allow the rough and tumble hard rock miners spend their money at the company store or in the local saloons and bawdy houses. Things got “western” for a couple of days and the old jail, which looked more like a concrete bunker was usually overflowing. Local legend has it the jail had spikes on the floor to keep the occupants from getting a good night’s sleep.

Those plucky mines never let a thing like incarceration keep them from the saloons. Once, when the jail was filled to the gills, the town constable chained a dozen unruly drunks to a huge mill wheel. Undaunted, they picked up the wheel in unison and hauled it to the nearest saloon and demanded an ax from the bartender to widen the door so they and the mill wheel could come in and join the festivities.

Lewis St. James was the local magistrate. He was stone deaf and couldn’t hear the testimony of those who came before the bench but he seemed to know most of the defendants personally and he passed judgement accordingly. Like most judges in the West, he took a common sense approach to dispensing justice. He was also possessed with an uncanny ability to know how much money they were carrying and fined them accordingly.

The citizens of old Jerome showed their hearts were in the right place in many ways. When a miner died in an accident there was no company plan to help the family. When this happened some Good Samaritan would head for the local saloons and pass the hat. The miners were always willing to give what they could as they knew full well they might be next.

There was a popular prostitute who sent a large portion of her earnings to support her daughter who was attending a finishing school back east. The youngster, unaware of her mother’s true profession, believed her mother was managing a fancy hotel in Jerome. A dilemma arose when she received a letter from her daughter saying that she was coming to visit.

When the manager of a local hotel learned of the situation he graciously allowed the woman to “manage” the establishment while her daughter was visiting. The youngster arrived by train, stayed several days at the hotel and after a wonderful visit, returned to school none the wiser. Afterwards the mother returned to her job at the bordello.

Like all mining towns the citizens of Jerome loved their baseball team. Games between Jerome, Prescott and Clarkdale were hotly contested. Community pride relied heavily on the success of the ball team. They always drew large crowds and the miners bet their hard-earned money on the outcome. The local mining company bankrolled the team and imported some of the best players money could buy, regardless of past reputation. One of these imports was Hal Chase, best remembered as a member of the infamous Chicago Black Sox scandal in the 1919 World Series. Chase had been banned from baseball for life but he could still hit baseballs and he found employment with the Jerome team. He didn’t last long, gamblers from Clarkdale bribed him to throw a game and the rabid fans in Jerome ran him out of town. Chase then took his talents to Bisbee but soon was up to his old tricks and was invited to move on.

Jerome’s citizens never missed a chance to celebrate some festive occasion and the Fourth of July was always the favorite. There were boxing and wrestling matches. The most popular were the single-jack and double-jack drilling contests.

Everybody turned out on the Fourth to watch the volunteer hose companies run competitive races up the steep hills of Jerome. A great deal of pride was at stake, since the hose company judged the fastest was held in the highest esteem among the citizens.

Jennie Bauters was Jerome’s most prominent and prosperous madam. It was said that around 1900 she was the wealthiest businesswoman in Arizona. She was also quite resourceful. Jerome had three disasterous fires in three years during the late 1990s. Religious zealots in Phoenix stood street corners declaring the Almighty was punishing Jerome for its wicked ways. A more likely reason was the town rested on a hillside and when a fire started on the lower side of Cleopatra Hill it could sweep up the hill and wipe out the town in a matter of minutes.

On one such an occasion Jennie rushed down to the nearest group of firefighters and offered them lifetime free passes to her establishment if they’d keep the fire away from her establishment. It was said those firemen rose to superhuman efforts as they charged up the hill and extinguished the flames at Jennie’s house.