Klondike Dining with the Earps 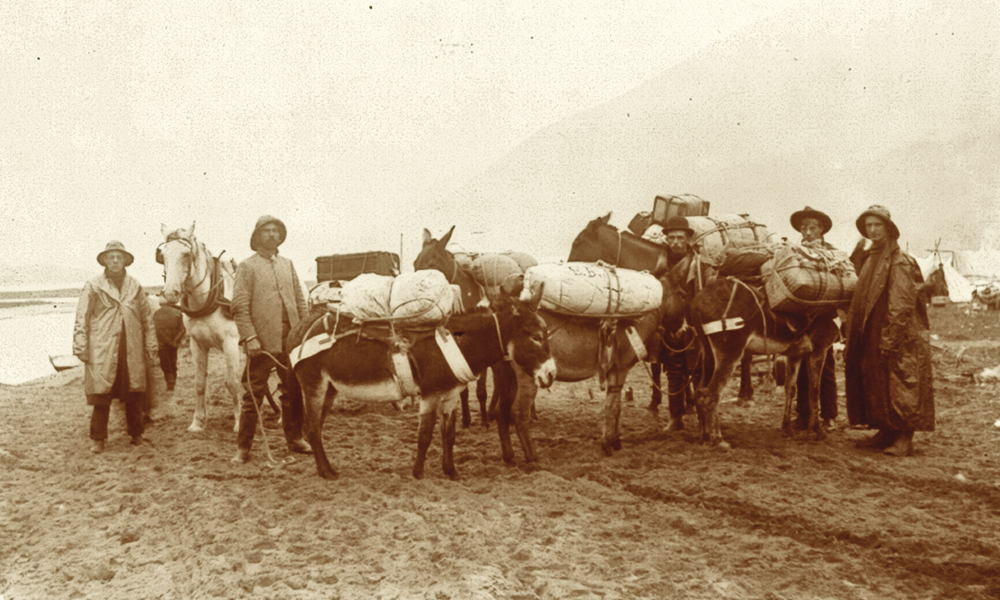 The Klondike and Yukon Rivers, bordering Alaska and Canada, were the final frontier for 19th-century miners out West. In the late 1890s, thousands departed California
and Washington ports in search of gold. Wyatt and Josephine Earp were among these stampeders who braved the cold and the desolate terrain.

The Earps, like many others, settled on the Yukon River town of Rampart in 1898. Josephine remembered her time there fondly, “As soon as we settled and I was taking my first batch of bread from the oven, with beans boiling on the stove, Wyatt came in from battling a snowstorm, dressed in his mukluks (boots) and parka. He sniffed, his eyes lighted up with pleasure, ‘snug as a bug in a rug!’ he exclaimed. On such small hinges does the door to contentment swing.”

Another stampeder, Dr. Kristian Falkenberg, recalled, “It is hard to believe what we would go through for the lure of gold…. We bought an outfit of 500 pounds of bacon, 500 pounds of hardtack, coffee, tea, dried fruit, etc.”

The stampede began in 1897, after a ship, laden with gold, arrived in San Francisco, California. Yet people had been mining gold in the area before then. In 1895, Mrs. J.T. Wills made the trek from Tacoma, Washington, via the Chilkoot Pass, which was the most popular route, but also the steepest.

When she reached Circle City along the Yukon River, she intended to open a restaurant. She realized that would not happen, stating, “I could find nothing to cook when I got there. I was in a worse plight than old Mother Hubbard.”

She used the supplies she could find, tea and lard, along with the 100 pounds of flour she had hauled with her, to make bread. Her stove could only bake two loaves at a time, but at $1 per loaf, she netted a tidy sum of $14 per day.

She spent 78 days there and intended to return the following March, stating, “I will take my Domestic sewing machine along and expect to earn wages making tents and clothes for the miners. I will also bake bread. My husband will not go along. He could not stand the hardships, I believe…. Weaklings have no business there.”

Samuel Somerville recalled some unique cooking techniques in the challenging Yukon climate: “After the bread, buns or rolls are in the pans and ready to go into the oven we bake just what we want for that time and then take the other pans out doors or in the outhouse and let them freeze hard and leave them there. In the morning when cooking breakfast we bring in one of those frozen pans of buns, put them into the oven and bake.”

They also made enough beans and stew for a week and froze them outside in open tins, he said. Then they took a hatchet to chop off whatever was needed for a meal. Many stampeders froze a week’s worth of food to save time cooking.

Try out some Yukon Beans from the 1897 recipe—luckily you won’t need to make a week’s worth!

Soak beans overnight in water. The next day, rinse and drain. Place into a large dutch oven or stockpot, and cover with water. Bring to a boil over high heat. Transfer to a baking dish. Salt and pepper the beans, then stir. Place the pork in the center of the beans and top with the molasses. Cover and bake at 325°F for five hours or until tender.