Leo the African Lion’s Arizona Adventure – Part 1: The Take Off 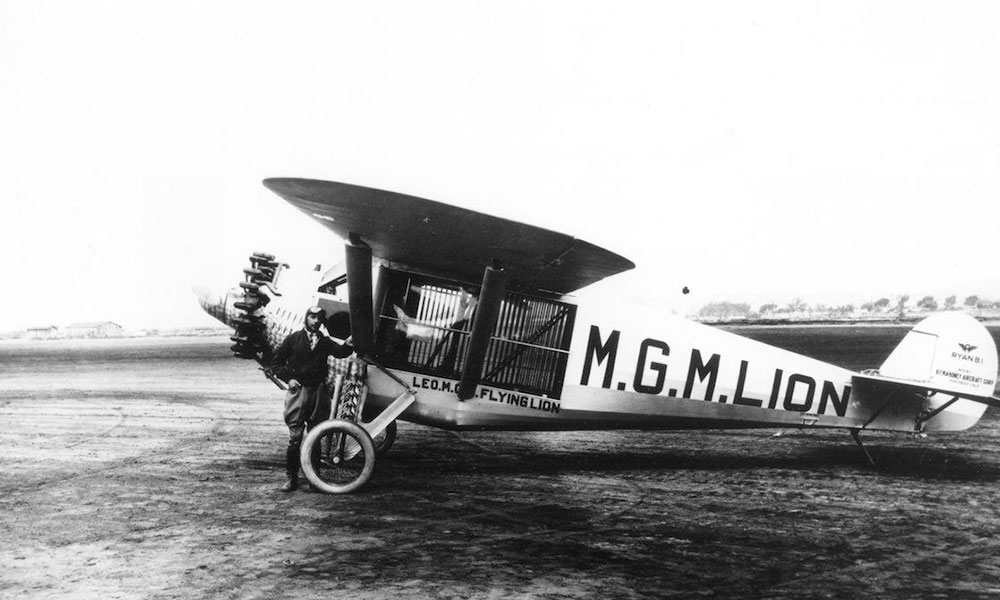 In September, 1927 MGM Studios decided to send their new mascot, a 350-lb. African Lion on a goodwill trip by airplane to New York City. They hired an experienced stunt pilot named Marty Jensen, who had also had cross-country flying experience. The original flight plan was to take off in California, fuel up the plane in Phoenix and then fly non-stop to New York City via the southern route through Amarillo, Texas.

Jensen was flying a Ryan B1 Brougham, the same model as Charles Lindbergh flew his “Spirit of St. Louis” on his solo flight across the Atlantic a few weeks earlier. MGM wanted to capitalize on the Lindbergh flight to promote their mascot. The plane was modified to accommodate Leo, his heavy steel cage, tanks loaded with milk, water for the big cat, and an extra fuel tank. The engineers had assured MGM the plane with its 220-horsepower Wright Whirlwind engine could overcome any obstacle they might encounter on the flight.

Although the maximum takeoff weight on the Ryan B1 was 3,300 lbs. the added weight from the iron cage, the extra 450 gallon fuel tank, the 350-lb lion along with the milk and water excessive weight added up to 850 lbs.

They took off from Camp Kearny, near San Diego on September 16th, 1927.  Despite the fact that his plane was way over its maximum take-off weight, Jensen managed to get the ship airborne.

In flight, somewhere near Roosevelt Lake, the moguls at MGM changed plans and ordered Jensen to take a more northerly route over Albuquerque for a publicity photo op. With these new orders, Jensen turned his plane north headed towards the Mogollon Rim, unaware of the massive thousand-foot-high precipice known as Arizona’s “Backbone,” was blocking his flight path.

He’d managed to skirt the lofty Mazatzal Mountain range by flying through a narrow canyon and Jensen believed he’d have smooth sailing from there on but suddenly the towering Mogollon Rim presented a more formidable obstacle. South of the little town of Payson he turned east over the Tonto Creek basin. With his plane so overloaded he was lucky to get a hundred feet off the ground and at full-throttle he could only get his speed up to 90 mph. Passing over Gisela he turned east along Tonto Creek.

Tonto Creek begins at the base of the Mogollon Rim and over the next seven miles, snakes its way south through forested, shallow canyons before plunging into the jagged, daunting chasms of the Hellsgate wilderness.

Jensen suddenly realized he was flying into the deep, forbidding abyss. The 40-foot wing span on the Ryan B1 was dangerously close to both sides of the canyon wall. It took all his skills as a stunt pilot to keep from crashing. He had to maintain a speed of 90 mph. or the plane would stall and plunge into the rocky crags.

He finally cleared the gorge but the plane was now flying at treetop level giving him no choice but to look for a clearing where he could make a landing. Then a wing clipped the limb of an oak tree sending the Ryan Brougham plummeting into a mass of rocks and trees.