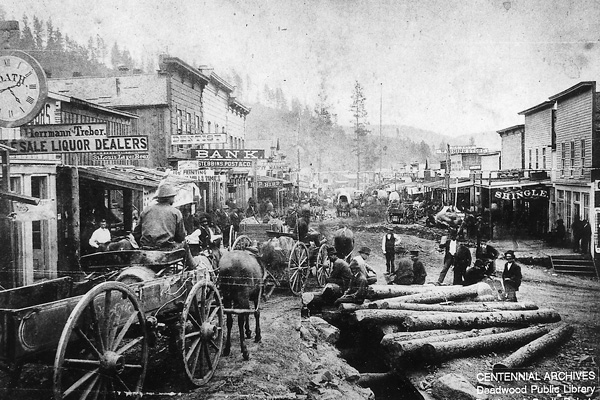 In a nearby cabin, Jack McCall awaited the ultimate sentence while a perfect pine limb swayed in the breeze. Where was the jury when they were creating this famous chapter in history—a trial that would be written about for 125 years?

Though the actual place of the shooting has been known for years, the McCall trial location has eluded even the most reputable writers and scholars. Was it the McDaniels Theatre, Langrishe Theatre, Deadwood Theatre, Gem Theatre and Dance Hall, or possibly the Bella Union Variety Theatre? Even the No. 10 Saloon has been suggested.

With the August 5 edition, the Pioneer became one of the first newspapers to report the shooting of Wild Bill Hickok and subsequent activities. The Pioneer reported that after the capture of Jack McCall,

. . . preparations for a trial were made by calling a meeting of citizens at the theatre building . . . and immediately after the theatre was over, the meeting was called to order, Judge Kuykendall presiding . . . it was decided to adjourn to meet at 9 o’clock A.M. Thursday, August 3rd.

Some writers have accepted stories by supposed eyewitnesses placing the McCall trial at the No. 10 Saloon. Wild Bill Hickok drank, gambled and died in the No. 10, but the brief next-day trial of Jack McCall was not held there.

However, the Saloon No. 10 may very well have been where the verdict “not guilty” was read after the first elements of the trial were held in the nearby theater. In his 1917 book, Frontier Days—A True Narrative of Striking Events On The Western Frontier, Judge William L. Kuykendall, the elected Judge of the trial, recalls,

. . . that night [August 3] one hundred and five men met behind closed doors in Langrishe’s Theatre . . . to observe the proper formalities, I was selected as chairman. . . . after arguments of counsel [the next day] I charged the jury about sundown, and as the theatre could not be used that night, the saloon where the killing occurred was selected as the place to receive the verdict, the prisoner being confined in a cabin immediately in its rear, in front of which stood a large pine tree having a limb just right for the hanging.

This tree, so conveniently in place to assist with the anticipated frontier justice, was not needed for Jack McCall in Deadwood. An 8’x 10’ hangman’s platform would be McCall’s final destination on March 1, 1877 in Yankton, the capitol of Dakota Territory.

On July 22, the Pioneer provided a story of Langrishe’s opening debut at the new Deadwood Theatre, which included the lead-in headline,

THE THEATRE- The Langrishe troupe will make their first appearance in their mammoth pavilion theatre, and give the first dramatic renditions ever witnessed in Western Dakota . . . we hope the enterprising manager will never have occasion to regret locating to Deadwood City. . . .

Lawrence County’s first appointed Sheriff, Seth Bullock, made note of the theater building in his unfinished history of the Black Hills. Published by Bullock’s grandson, Kenneth C. Kellar, in his 1972 book, Seth Bullock—Frontier Marshal, Kellar writes that Bullock noted that,

Jack Langrishe and his theatrical troupe arrived in Deadwood . . . shortly before their arrival, a theatre had been erected on Main Street, thirty feet front by one hundred feet deep, with a canvas roof, as shingles had not yet made their appearance in camp. The theatre was greatly appreciated by the citizens of the town for in the daytime it was used for murder trials, receptions, funeral services, dances, and other gatherings.

With this reference, and those previously mentioned, the original site of the Deadwood Theatre is certain. In addition, we now know the rest of the businesses on Main Street Deadwood in August of 1876. What it reveals is ironic: the current location of the new Old Style Saloon, where the reenactment of the shooting of Wild Bill Hickok occurs four times a day, is the original site of the Deadwood Theatre—the location of the Deadwood City trial of Jack McCall in the summer of 1876. Indeed a coincidence, coming on the 125th anniversary of this historic event.