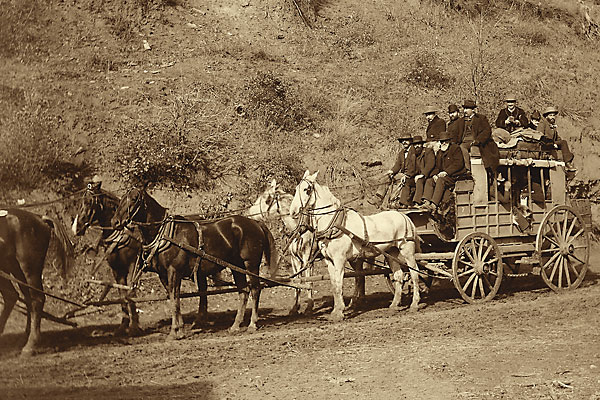 “Rumbling noisily through the black canyon road to Deadwood, at an hour long past midnight, came the stage from Cheyenne, loaded down with passengers, and full five hours late, on account of a broken shaft, which had to be replaced on the road.

“There were six plunging, snarling horses attached, whom the veteran Jehu on the box, managed with the skill of a circusman, and all the time the crack! snap! of his long-lashed gad made the night resound as like so many pistol reports.”

So wrote Edward L. Wheeler in his 1877 Deadwood Dick the Prince of the Road; or the Black Rider of the Black Hills, as part of his “Deadwood Dick” series of half-dime novels that helped to popularize the Cheyenne and Black Hills Stageline, more popularly known as the Deadwood Stage.

Buffalo Bill Cody also gave notoriety to the stage company by featuring an attack upon the Deadwood Stage as part of his Wild West show. Cody billed this coach as the “Most Famous Vehicle Extant,” and royalty such as the Prince of Wales and Edward VII were given rides in the Deadwood Stage.

Jack Gilmer and Monroe Salisbury of Ogden, Utah, purchased the Black Hills Stage, Mail and Express Line from Red Cloud Agency trader Frank Yates and his father-in-law W.H. Brown, and the stage stop locations from George Homan in 1876, and started up their operation.
The Deadwood Line operated between Cheyenne, Wyoming, and the Black Hills of the Dakotas. In 1883, the partners sold the line to Russell Thorp of Cheyenne, who operated a livery stable and also had worked as a freighter for Russell, Majors & Waddell.

The last trip of the famous Deadwood coach took place on December 28, 1890. Photographer John C.H. Grabill captured a photograph of the stage on that day. The railroads were coming in, and express companies were finding it more economical to deliver their packages via the rails. Crack! snap! the stagecoach era was coming to an end.